A thoughtful approach to expanding globally 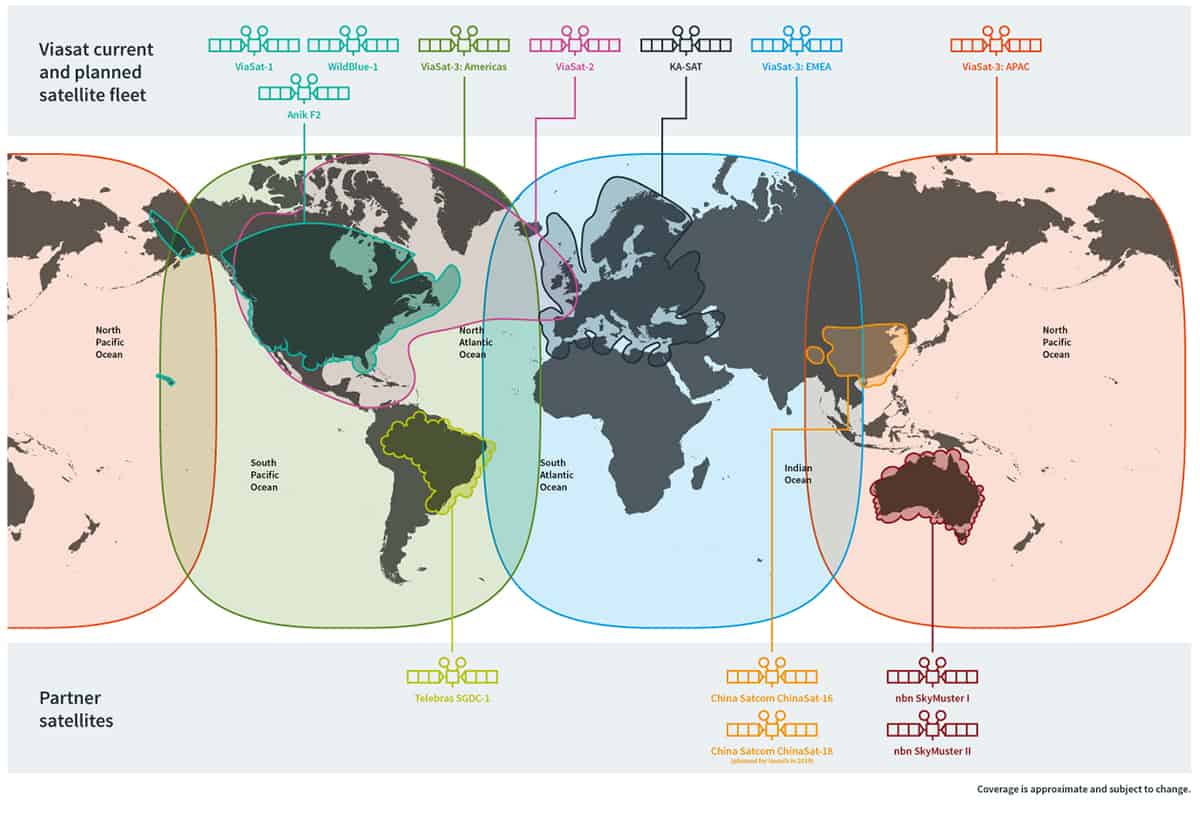 In the next few years, Viasat’s internet service is expected to reach around the world. To prepare for that expansion, the company is using not only its 15 years of experience as a domestic internet service provider (ISP), but much more recent business insights gained from ongoing projects in Australia, Mexico, Brazil and Europe.

Viasat’s global ambitions are focused around ViaSat-3, a constellation of three satellites expected to begin launching in 2021. All of Viasat’s current and future satellites serve a variety of applications — from residential and aviation to maritime, military and enterprise — with the potential to help bridge the digital divide in different ways. Billions of people still remain unconnected, many in parts of the world where terrestrial ISPs can’t or don’t go.

Satellite internet, with Viasat as an industry leader, is poised to fill in those many coverage gaps.

Preparing for an international business involves much more than building the physical network – a massive undertaking on its own. It requires a thorough understanding of service availability and gaps, existing infrastructure, detailed budgeting with ample room for contingencies, learning regulations that vary country-to-country, planning an adequate workforce and office locations, understanding cultural norms and differences – and much more.

Along with that long list, the company is fine-tuning existing service plans and broadening product offerings in anticipation of ViaSat-3. 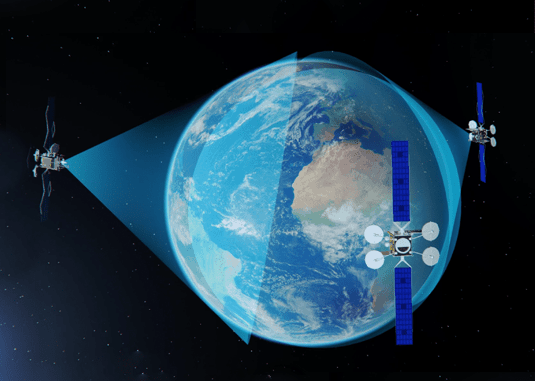 ViaSat-3: How just three high-capacity satellites in geostationary orbit can cover the earth.

While becoming the first global ISP is an ambitious goal, Viasat is reaching toward it following the same sustained formula that’s worked throughout its 33-year history.

“Viasat is a long-game company; it always has been,” said Vice President of Consumer Services Tom Lookabaugh. “We have a unique market position to explore, and this long-game character gives us the opportunity to do things you simply can’t do on a short-term mindset.”

That long-term approach got a big boost in 2009 when Viasat acquired WildBlue Communications, a Denver-based satellite ISP. With the expertise of running a network and managing a customer base in place, in 2011 it launched the ViaSat-1 satellite — the highest capacity communications satellite in the world when it launched. In 2017, the ViaSat-2 satellite was launched, nearly doubling the capacity of its predecessor.

The next big development in that long-term plan is ViaSat-3, which is expected to enable connectivity across most of the globe. The first of the three Ka-band satellites will cover the Americas. The second will focus on Europe, the Middle East and Africa (EMEA). And the third, will cover the Asia-Pacific region.

“We’ve built an institution on the U.S. model, but the staircase keeps going up; we’re now showing the world,” said Kevin Harkenrider, Vice President of Broadband Services. “We have exciting challenges ahead; we’re in a good place.”

The foundation is already being built. Payloads for the first two satellites are under construction at Viasat’s Tempe, AZ campus, with the third not far behind. Meanwhile, teams are busy planning for the fiber connections, ground systems and other infrastructure needed to connect to the satellites in space. 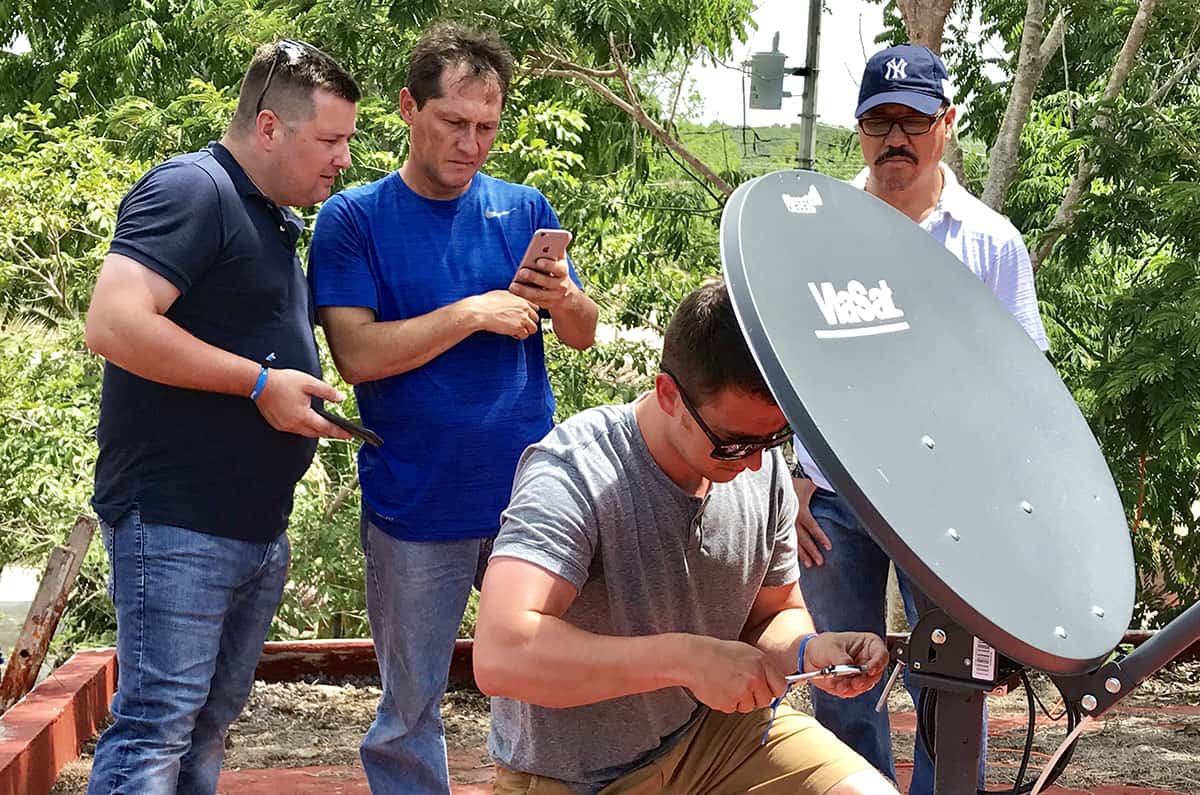 Viasat technicians align a satellite dish on the roof of a school in Pac Chen, Mexico in 2018. Viasat has been active in the country with its Community Wi-Fi and other internet services.

Not a newcomer to the global market

Viasat is already active outside the U.S., and has created a mix of products and business arrangements to fit a variety of circumstances.

Through partnerships with other companies or government entities, Viasat has been granted access or an ability to lease space on partner satellites, enabling the company to serve customers in Mexico, Brazil, Australia and across Europe. For example, in Australia, Viasat manages the ground network for the country’s national broadband network, nbn, and maintains a relationship with nbn to offer in-flight connectivity services.

Viasat’s Community Wi-Fi – a service that uses a centralized Wi-Fi hotspot to connect to a satellite to deliver internet service – allows people with no or limited options to connect devices for a small fee. The service is already available to more than 1.5 million people in Mexico and recently launched a trial program, in the state of Sao Paulo in Brazil.

All those applications and more will be used to bring the internet around the world.

The experience gleaned to-date in Mexico and Brazil is invaluable in planning for the multi-country rollout of ViaSat-3.

Lisa Scalpone, Viasat’s Vice President of Latin American Internet, commented: “Each country is unique and we need to understand and celebrate these differences – from how their legal and government systems work and cultural nuances to regulatory and tax matters. These are all very different from the U.S., and that can impact how we grow our relationships and businesses globally.”

“There is not a one-size fits all approach to growing a presence in a country, and best serving the people who live and work there. We cannot treat going into Brazil the same way we would go into Uruguay,” Scalpone said. “A lot of our learning will be experiential. We will learn through local partnerships, hiring local teams and by actually providing the service to meet the local demand. Our goal is to always build trust, and show we, and our technology, are good for the region, the country, the people.”

Building on Scalpone’s comments, Lookabaugh added: “As we are pursuing more and different forms of international business, we’re learning. Part of the learning experience is understanding how different each of these locations can be, and a lot of that has to do with the way business is done. It will vary greatly country to country—and we are looking forward to this challenge.”

The extent to which Viasat will do business in various countries will depend on numerous factors.

“We are being extremely thoughtful in our approach to entering any new market, building local partnerships, understanding the local regulatory considerations and most importantly understanding the local end-user needs,” Lookabaugh said. “In some cases, it just may not make business sense to enter a country, but again, that will be determined on a county-by-country basis.”

The second ViaSat-3 satellite is expected to cover EMEA. Viasat has already established a presence in Europe, with residential and aviation services already offered in and over a number of European countries.

“We’re already in a number of key markets for ViaSat-3,” said Jason Robbins, Viasat’s Chief Operating Officer for Europe. “We’re building up the Viasat brand, getting market expertise, setting up retail infrastructure, building care systems and establishing call centers. So when ViaSat-3 service is launched, we’ll be able to hit the ground running.”

“We’re also finding out where the people who want satellite internet and need a better option are located in these countries,” he said. “One of our main goals is to understand where our customers are.”

While Viasat is offering plans in Europe similar to those in the U.S., little else in the European business is the same.

“Each country comes with different regulatory restrictions, as well as different rules about how you can offer and advertise service,” Robbins said. “So having us out here learning about these markets now — before the launch of ViaSat-3 — is really critical to understanding all the different things that go into an international service launch.”

Getting to know what people expect, he said, is key to meeting their needs.

In addition to learning about customer needs, the Viasat employees already working in Europe are ensuring the fiber network, ground stations and other infrastructure is in place and ready when the ViaSat-3 service goes live.

Robbins, who moved to Viasat’s Lausanne, Switzerland office from California to prepare for ViaSat-3, relishes the complex process.

“From a learning perspective, the biggest challenges have really been around all the unknown things that are unique to each country,” he said. “These markets are really diverse, and you don’t learn how diverse until you’re actually out here working in them. We’ve been able to learn a lot working with installers and marketing agencies in all of our targeted countries. We’ve developed some really great partnerships, and it helps us see and do things differently.”

Opportunities ahead in Asia Pacific

The third ViaSat-3 satellite will cover the largest swath of both the world’s land and population, which will make it the most complex Viasat satellite rollout to date. More than half the global population – 4.1 billion people in 48 countries – is in Asia. And many of those countries already have government-owned or controlled satellites. Where coverage is allowed, Viasat will need to acquire landing rights – permission to operate the satellite – and establish ground infrastructure.

Viasat’s Asia-Pacific office, headquartered in Melbourne, Australia, has expanded from 15 to 45 employees in recent months to prepare for the work it needs to do.

“In our eyes, the ViaSat-3 APAC launch is not that far away,” Asia-Pacific Vice President Peter Girvan said.

“Our current relationships in Australia coupled with the announcement that we’ve placed an order with Boeing for the third ViaSat-3 satellite underscores our interest and commitment to growing a presence in the APAC market.”

“For us, we see an opportunity in our ability to drive down the cost of bandwidth for all types of broadband service offerings.”

Recently, Viasat announced an agreement with China Satcom to provide service to aircraft over China. While the deal focuses initially on capacity from Chinese satellites, the ViaSat-3 Asia-Pacific satellite is expected to be part of the overall picture once its launched.

Estimates show nearly half the world remains unconnected. And as it passes each country’s regulatory hurdles, Viasat could become a good option for many of the people living in those areas. In many parts of the world, terrestrial wireless and wireline providers simply don’t offer service — particularly in more remote areas – because the high price to enter these locations is cost-prohibitive.

Based on the available internet choices, Lookabaugh believes Viasat’s international customer base will vary from country to country, and even within regions of individual countries.

“There are a lot of people in various geographies who are under- or un-served. We think we have a pretty interesting differentiated strategy with our geostationary satellites and vertical integration approach. We think the economic advantage of our satellites will enable us to make the internet accessible, available and affordable — all critical attributes we’re working to bring global.”