Viasat and Facebook propose to accelerate the rollout of Viasat’s Community Wi-Fi, with Facebook helping to identify unconnected and poorly connected communities in Mexico that would benefit from Viasat’s service. 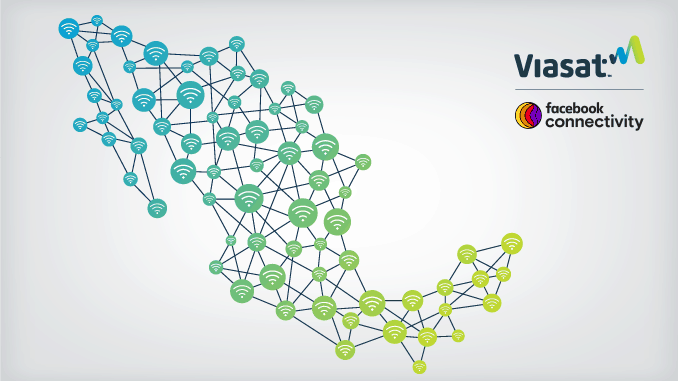 Viasat’s Community Wi-Fi service in Mexico just got a big boost from Facebook. In a new collaboration announced Feb. 20, the two companies propose to accelerate the rollout of Viasat’s Community Wi-Fi, with Facebook helping to identify unconnected and poorly connected communities in Mexico that would benefit from Viasat’s service. Billions of people around the world still have no or little access to internet service. The reasons for this are many, but chief among them are cost and accessibility. Traditional internet service providers rely on more densely populated areas to get as many customers as possible on their network, and more remote communities don’t typically fit into that model. A better solution in many areas is internet delivered via satellite. In addition to the kind of fixed, direct-to-home service enjoyed by many of the company’s subscribers in the U.S., Viasat and its local partner, Prosperist, have in the past year created a new kind of satellite service aimed at more remote locations and poorly connected suburban and urban areas in Mexico. Made possible by the company’s ViaSat-2 satellite, which began providing commercial service in 2018 and covers most of Mexico, the Community Wi-Fi service is now within reach of more than one million Mexican citizens. It’s this engagement and successful rollout that caught the attention of Facebook, which shares a similar goal with Viasat in reaching the unconnected. “Facebook is committed to working with industry partners around the world to help bring more people online to a faster internet,” said Dan Rabinovitsj, vice president, Facebook Connectivity. “Viasat’s rapidly growing Community Wi-Fi hotspot service is an example of a model that can help overcome the global connectivity challenges of accessibility and affordability, particularly in hard-to-reach rural areas.”

While the technology to bring high-speed internet to a remote town in Mexico is fairly complex, the solution on the ground is relatively simple. A satellite antenna is installed at a central location in the town — typically at a small business like a mom and pop grocery store. With the help of powerful Wi-Fi equipment, the signal is shared for over 500 yards around the access point installed on the building. People then pay a small amount to the local business owner for a code that allows them to get online with a set amount of time or data. (A typical example might be about 50 cents for an hour of use or $1.60 for 200MB.) “The collaboration with Facebook will accelerate our deployment in Mexico to connect unconnected communities by helping to identify these locations,” said Kevin Cohen, Viasat managing director of Global Community Wi-Fi. “This will connect more people at a faster rate that previously had no or very poor/slow internet options.” Along with the inherent ability of satellite to reach places where terrestrial ISPs and mobile services can’t or won’t go, Viasat has addressed the affordability issue as well. That’s in part due to the innovative model of sharing a single terminal, but it’s also a function of Viasat’s approach to creating bandwidth. Through the introduction of ever more-powerful satellites with a great deal more capacity, Viasat has continued to drive down the cost of bandwidth, which puts it in greater position to connect communities in all socio-economic ranges. “Enabling the next four billion internet users to come online is one of the grand challenges of our time – and participating in that is also one of the most exciting and rewarding opportunities of the mobile internet era,” said Mark Dankberg, chairman and CEO, Viasat. “Rural communities, especially in emerging markets, are often the hardest to serve economically, yet are a vivid example of how Viasat’s innovative capacity-rich space communication systems can bring broadband communication services to the places that need it most, at the lowest bandwidth costs.” Facebook is investing in the roll-out and working with Viasat to help identify optimal deployment locations, within Viasat’s current and planned satellite coverage area. That coverage currently includes most of North America and across the Atlantic for ships and aircraft. Viasat is also at work on a global constellation of three next-generation ultra-high-capacity satellites, known as the ViaSat-3 class satellites, to bring affordable high-speed, high-quality internet connectivity to the hardest to reach places world-wide. Viasat believes it can use the Community Wi-Fi model in many other areas of the world once the ViaSat-3 constellation is in place. While the collaboration with Facebook is getting its start in Mexico, there’s a potential to expand that globally. “We are excited to partner with an industry leader like Viasat to accelerate Wi-Fi network deployments,” said Facebook’s Rabinovitsj. “Our joint initiative will enable more people to connect with friends and family, share knowledge and access education and career opportunities.”