Integration and testing is ongoing at Boeing Satellite Systems 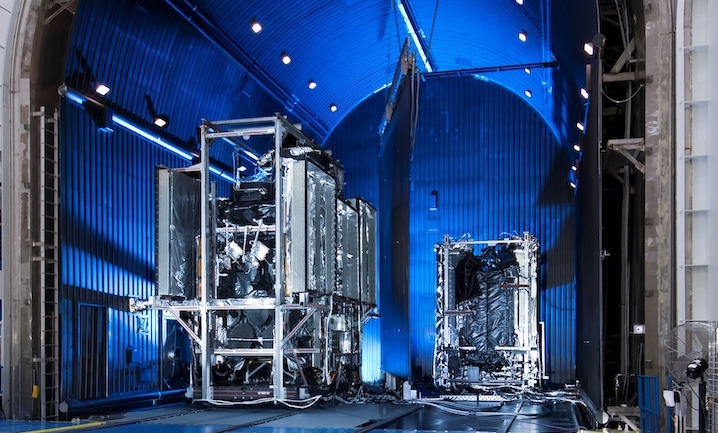 A look at the thermal vacuum chamber — one of the testing areas at Boeing Satellite Systems in El Segundo, CA

The types of large, Ka-band satellites that form the basis of the Viasat network take years to design and build, with a number of important milestones along the way. One of the biggest for the upcoming ViaSat-3 constellation was achieved in June, 2021 when the first satellite payload was shipped from our facility in Tempe, AZ to Boeing Satellite Systems in El Segundo, CA.

There, the payload was integrated with what’s known as the “bus” — the subsystems that have all of the power supply, solar panels, telemetry controls and the like. For ViaSat-3, we’re using Boeing’s 702 platform, which has launched over 50 times with other satellite payloads.

As Viasat’s John Michalek explains it, the bus is the core equipment that maintains the viability and health of the satellite on orbit, and the payload is the cargo that contains all the revenue-producing equipment — in this case the sophisticated technology that will enable the completed satellite to provide internet service.

A veteran of a half-dozen satellite launches in his career, Michalek is part of the team that will work hand-in-glove with Boeing over the coming months to test the satellite and its components in a variety of highly detailed and intensive tests to ensure it’ll be ready both for the shock and vibrations of launch and the harsh environs of space.

Michalek explains that the Viasat-built payload is designed from the start to fit within a module that will, in turn, fit right into the Boeing bus.

“When you put the two together, then you have the full system,” he says. “You actually have something you can launch.”

The physical integration of the payload module into the bus happened fairly soon after the payload arrived in June. Now, the integrated satellite is undergoing all those tests, aimed at finding even the tiniest deficiencies before launch because, as Michalek says, “We only get one shot.”

For anyone wondering why it takes 9-12 months to work through all those tests, it boils down to the thoroughness required to build something so dynamic and complex.

“It takes a level of diligence you wouldn’t see in a lot of other industries,” he says. “So we take the time to get it right.”

In addition to being able to endure a launch, satellites also have to face extreme temperatures — from the cold of space to the heat of the sun.

When it comes to the thermal testing, Boeing’s Chelsey Tank, who serves as the integration manager for the first ViaSat-3 satellite, outlines part of the process:

“Our 45 x 35 x 40-foot thermal vacuum chamber is able to simulate the extreme environment of space in both vacuum and cold,” she says. “That includes a shroud temperature of liquid nitrogen capability of -320°F (-195° C) and a gaseous nitrogen range from -250° (-157° C) to +250° F (121° C). It can be configured to simulate ambient solar radiation, and it’s large enough to accommodate a variety of test article dimensions — even multiple test articles at once.”

Tank notes that there are several types of 702 platforms, and that it’s a modified version of the 702MP+ being used for ViaSat-3 — which, with 20kW of power, will be one of the most high-powered satellites ever built.

Those solar panels, built by Boeing subsidiary Spectrolab, have a storied history, she adds.

“Specrolab's solar cells were the first on the Moon, on Mars, and have now powered more than 1,000 satellites around the globe.”

What to look for

Sometimes referred to as “shake & bake,” the testing process will go through several phases, with Viasat team members on site for the duration to address any anomalies.

“You may find data errors. You may find something going outside a temperature range that you had expected. You may find erroneous telemetry data in the vibration or acoustic testing. You may find a sensor report back a resonance that's a little bit different than your model.”

Since each ViaSat-3 satellite is designed to have an unprecedented amount of throughput capacity (more than 1 terabit per second), it also has a good deal more components to be tested, Michalek says.

The first ViaSat-3 is planned for launch in 2022 and will cover North and South America. Before long, the second satellite payload will be ready to ship to Boeing, and the process starts all over again for the second flight, which will cover EMEA (Europe, the Middle East and Africa) and the third, for the Asia-Pacific region.

The unique nature of the ViaSat-3 satellite design has meant a longer time frame, despite advances Viasat made in the testing process itself.

“I’ve worked in space for 25 years and this is probably the largest system I’ve worked on in terms of development,” he says. “Everything is new with the design of ViaSat-3, so you’ve got a lot of validations you need to do over your assumptions as you go along. You need a good amount of patience for this kind of work, but you keep forging ahead knowing that, yes, you’ll get to that end answer of a working system.”

With three satellites in the constellation, there’s plenty of work ahead. Michalek says the team looks to each milestone as part of the process.

“We have major milestones for each major test that occurs,” he says. “And so as you complete one and you have that behind you, yeah, there's a little bit of a victory there. And now you do the setup for the next test, right?”