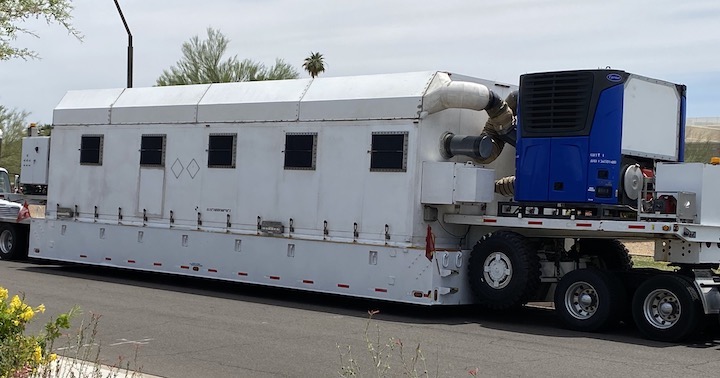 You can't ship a high-tech satellite over the road in any old flatbed. This rig is specially designed to act as a sort of clean room on wheels, with climate control, shock dampeners and other features to ensure a safe journey.

ViaSat-3 is at once enormous, imposing, and powerful. Once fully deployed in space, the satellite will be about equal in length to a Boeing 767’s wingspan — or about half a football field. It weighs 13,000 pounds and is packed with cutting-edge high-tech componentry, proprietary circuitry and thousands of state-of-the-art parts.

And it just made a 400-mile road trip in advance of its eventual launch to an orbital altitude of 23,000 miles above the Earth.

Prior to being shipped June 5 from the Viasat payload production facility in Tempe, AZ, to the Boeing Satellite Systems facility in El Segundo, CA, the giant payload’s vast array of tiny connections and components were tested over and over again. The precision-built electronics were designed and built to survive a rocket launch and work for 15 years or more in the harsh environs of space.

With the payload now one step closer to orbit, the folks at Viasat can relax — but for just a moment. After all, there are two more ViaSat-3s to prepare for the global constellation.

“You can see people getting excited about it and realizing, ‘OK this is real, and we’ve built electronics that are going into space that will change the world,’’’ said Kevin Pryor, lead integration test engineer in Tempe.

Pryor says the team worked together to create and test in record time what’s expected to be the highest-capacity communications satellite ever launched. Now, he says, teams are able to step back and see the entire mission coming to fruition.

“It definitely lets you see the forest through the trees, and it takes the breath away a little bit when you realize the whole scope of everything this team has done,” Pryor said. “We went from something the size of a deck of cards to something the size of a school bus. For many members of the team who worked on individual pieces, it was amazing to see it all put together.”

The next leg of the journey

The first ViaSat-3 satellite, which will cover the Americas, is known by the team as “Flight 1.” Its trip to Boeing was the culmination of years of work for many people who began planning ViaSat-3 six years ago and who have watched it come together over the past three years. With testing finally complete, team members were justifiably excited to see the specialized truck ready to load up the fully wrapped satellite payload.

“I think people are realizing that not only is this real, but it works the way we expected it to work,” said Dave Ryan, President of Space & Commercial Networks at Viasat. “Now, at Boeing, we plan to go through spacecraft integration and test quickly and methodically.”

Speaking to the innovative design that gives the ViaSat-3 satellite its enormous capacity (about 1 Terabit per second of throughput — more than the rest of the company’s fleet combined), Ryan said the testing done in Tempe in some ways rivaled the complex construction of the satellite itself.

“If we had done a traditional testing approach, it would have taken us months because there are so many channels and combinations to check out to ensure they’re working perfectly,” he said. “We were able to revolutionize how we did that so we could literally test the entire payload in a matter of a few weeks.”

He credits Viasat’s engineers with creating a high-fidelity system against which they could compare their tests, rather than shooting in the dark.

All that work to ensure everything is 100% on the ground is intended to avoid any problems once in orbit.

“We can’t send the satellite repairman 23,000 miles into space to fix this if something goes wrong,” said environmental test engineer Jack Feix. “If it’s going to fail, we need it to fail down here.”

ViaSat-3, like all satellite payloads, also has been subjected to rigorous environmental testing. Extreme heat, cold, vibration and other variables the satellite will encounter in space have been simulated over and over at the Tempe facility. And it just survived the trek to El Segundo with all that an interstate road trip entails: bumpy roads, bad weather and the patience of other drivers who encounter a strange-looking truck with a very wide load – followed by an entourage of other vehicles.

This first leg of the journey was a highly calculated and meticulously planned mission to Boeing, where the satellite will be integrated with the rest of the spacecraft — the “bus” — which includes the propulsion, attitude control, power subsystems and solar arrays.

Now that the Flight 1 payload is at Boeing, there is more testing ahead before it can be launched into space. But the teams in Tempe already are working on plans for the next system, using learnings from Flight 1 as a blueprint going forward.

Ryan says those lessons are already paying benefits in the construction of the next two satellites.

“The payloads are virtually identical, with each satellite tailored for coverage over its particular region of the Earth,” he said. “That's going to continue to pay big dividends for being able to finish the integration of those satellites in record time and be able to then launch them to cover the Earth — and then we will become a truly global internet service provider.”

For Ryan, who estimates he’s worked on more than 85 different satellite programs over his long career, working on ViaSat-3 has been a challenging and fulfilling project. And it’s just the beginning.

“I don’t think Viasat will ever be content with just building the same thing again,” Ryan said. “We use our success as a springboard to keep challenging ourselves.”