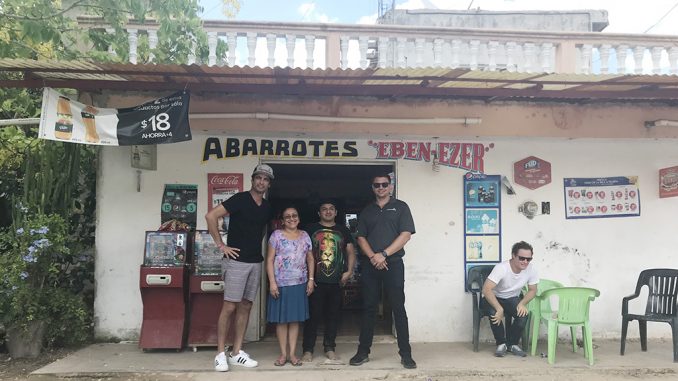 More than one million people in rural Mexico are now within walking distance of a Viasat Community Wi-Fi hotspot – many of which now include a voice service that thousands have already used to talk with distant family and vital business contacts.

“We’re approaching 1 million calls made over the service since its launch in September 2018,” said Kevin Cohen, Viasat managing director of Global Community Wi-Fi.

Viasat partners with Mexican telecommunications provider Grupo Prosperist to deploy the service across Mexico, bringing an affordable option for getting online and making phone calls to and from communities with no or poor internet and cellular options.

“The demand for Viasat’s Community Wi-Fi service has been high, which has led to job creation and local hiring to support the deployment of Viasat’s services across the county.” —Grupo Prosperist CEO Javier Ramirez Navarro

A voice enabled Wi-Fi hotspot is typically set up at a small community mom-and-pop store. With the new telephony service, residents use the Viasat-provided cordless analog telephone to make calls or receive calls, then post-pay the shop or business owner for the number of minutes they use. Because the service comes from a satellite, the equipment needed to install the voice-enabled Wi-Fi hotspot is minimal.

The use of satellite is key, since traditional internet service providers typically don’t offer service in such remote communities. That’s due to the cost to extend cables, wires and other infrastructure.

“Viasat is changing that and bringing affordable, high-quality, high-speed internet services,” Cohen said. “Through our relationship with Grupo Prosperist, we’re delivering up to 50 Megabit per second speeds, and we fully expect our opportunity to grow over the next few years as we continue to connect unconnected communities both in Mexico and globally under Viasat’s expanding footprint.”

While the internet service has proven to be very popular, the recently introduced voice service from Viasat and Grupo Prosperist has been a fast hit. It’s not only affordable but easy to use, even for the least technologically savvy people, and it keeps families and friends connected throughout Mexico and their contacts abroad.

“Some of the people in these communities may be digitally illiterate and don’t know how to use the internet, but they still have family and friends outside their community they want to connect with,” Cohen said. “Our voice service functions like a traditional phone but over Viasat satellites. It’s a cordless telephone; you just type in the number you want to dial and it connects you. Everyone can use it.”

In December alone, customers in Mexico used more than 500,000 minutes on the new voice service, making more than 200,000 calls.

“It’s definitely a valuable service we’re offering and a way for family members to keep in touch,” Cohen said. “Without this option, some of these people would have to travel hours away from their community to be able to talk to their loved ones.

“Now, instead of doing it on a monthly basis, they’re doing it on a weekly basis. That allows connections to stay strong among families. It’s super fulfilling that we’re able to help make that happen.”

“The demand for Viasat’s Community Wi-Fi service has been high, which has led to job creation and local hiring to support the deployment of Viasat’s services across the county,” said Grupo Prosperist CEO Javier Ramirez Navarro. "By working with Viasat we can bring the internet to millions of Mexicans and help generate a positive socio-economic impact in regions where traditional terrestrial and wireless internet services were either non-existent or cost prohibitive."

Viasat is also working on partnerships that could bring additional services like microfinancing, mobile banking, education and telemedicine to provide added value to communities which have, to this point, been ignored by traditional services.

Nichole Rostad is a Colorado native with a strong passion for Spanish literature, language and culture. She’s excited to be part of the Latin America Community Wi-Fi team at Viasat. In her free time, Nichole enjoys traveling, spending time with her dog, family and curling.