Viasat steps up the giving this holiday season

During the holiday seasons, employees from around Viasat step up to help out in their communities. 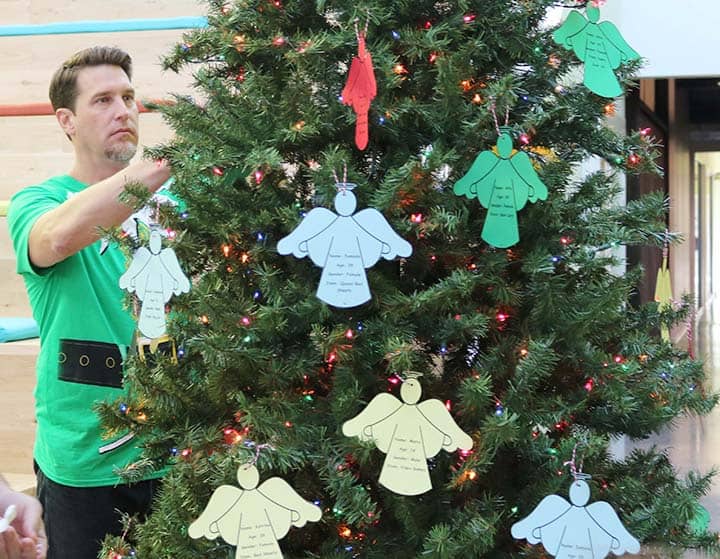 In cities across the United States, Viasat employees are making the holidays happier for those around them who could use some help. Whether it’s toys for kids or everyday necessities for veterans, most of our campuses hold at least one holiday giving program. All are led by employees.

“Viasat wants its employees to take the lead and do fundraisers and volunteer activities that are close to their hearts,” said Annie Garcia, who works with each employee champion in her role in Community Outreach and Charitable Giving at Viasat. “If someone wants to do something for the homeless, they can; for under-served kids, they can. We encourage them to start something they’re passionate about.”

The company further supports its employees’ altruism through VPartners, matching donations to double the total contribution.

Here’s a rundown on the holiday acts of kindness under way at just a few of our campuses:

With about 2,000 employees, it’s no surprise our main campus has a deep, giving spirit. Several different programs happen here in December, making the season brighter for a lot of southern Californians. We’ve highlighted just a couple of them.

The U. S. Marine Corps Reserve Toys for Tots Program: During this 8-year campus tradition, employees leave toys in 15 collection bins scattered among our 13 buildings. Those toys are wrapped and given as gifts to less fortunate children living in the Carlsbad area.

In 2016, Carlsbad employees donated 263 toys, with others instead making cash donations. VPartners matched the toy and cash donations for a total of about $6,000. Viasat Carlsbad used that money to buy 60 bicycles given to area children.

In this program alone, about 350 employees – more than 17 percent of the workforce – participated in one way or another.

Community Resource Center Holiday Baskets: Another 30 stepped up for this hands-on event, new in 2017.  The local charity provides low-income households with basic necessities and a few gifts for the holidays. That includes a food box with a turkey or chicken and all the trimmings for a holiday meal, plus staples for a week. Viasat volunteers and their families will help distribute 50 tons of healthy food.

Both children and the military get a boost from our Marlborough office’s 150 employees during the holiday season.

Staff members adopt about 30 children each year through the United Way of Tri-County’s Hope for the Holidays program. Program coordinators said employees go above and beyond to fulfill each child’s wish list, leaving the office tree overflowing with toys and other gifts.

Marlborough employees give money to send care packages to troops deployed overseas. These packages include comforting extra items not supplied by the government. This year, for instance, one unit requested a programmable coffee maker to replace a broken one; those service people were reportedly “thrilled” to be able to start their days with hot coffee. Three packages weighing a total of 111 pounds went to troops stationed in the Middle East.

Our Cleveland crew donated almost $1,000 in cash and food to the Cleveland Food Bank in 2016, and anticipate matching that again this year.

Employees there donated 325 non-perishable items of food and $160 in cash in 2016. With a match from VPartners, the total donation came to $970.

“It is so wonderful of Viasat to do the matching donations,” said Jeanne Warman, who coordinates the food drive. “The giving is rewarding in itself, but to be able to double it really makes an impact.”

But that’s not where the giving stops in Cleveland. Employees also donate generously to the City of Independence Police Department’s annual Shop with a Cop fundraiser. The police department uses the money to take children in need — and those whose parents are active-duty military personnel — shopping for Christmas gifts.

The Georgia team takes a break from building our antennas each year to help the area’s homeless people. Atlanta has among the highest homeless populations in the United States, so the need is great.

In 2016, Viasat employees donated almost 100 coats. This year, they collected about 50 coats, plus shoes and blankets. Employees not only donate the items, several volunteered to distribute the items at a shelter on Thanksgiving Day. Homeless people selected what they needed most from tables piled high with clothing and blankets.

When they’re not building ViaSat-3 satellites, the team in Arizona is giving back to the area’s disadvantaged children and senior. This year, the staff is sponsoring 77 children through the Salvation Army’s Angel Tree program, donating gifts to 20 seniors at a nearby senior center and coordinating a food drive with St. Mary’s Food Bank.

In Denver, the staff gives up its big Christmas party every other year, instead donating the money they’d have spent celebrating to a charity of their choice. This year, employees will vote from among four local organizations; the winner will receive a $10,000 donation.