Viasat has a long history of keeping service members and their families connected around the world; now, it’s expanding those offerings to naval ships in some of the hardest-to-reach places on earth. 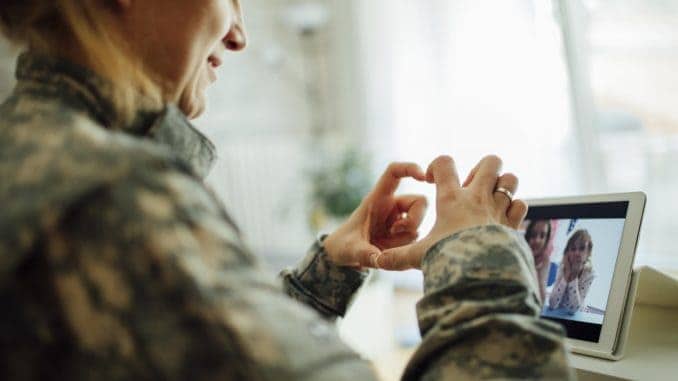 Tricia Hitt’s childhood memories of her enlisted father are as much about his absence as his presence. As a Navy man, he was often at sea for months at a time. If she heard his voice at all, it was typically recorded.

“I remember getting a cassette tape or letter at Christmas; I wasn’t able to talk to my dad on holidays and that was really sad,” said Hitt, who manages the internet services Viasat supplies to the military. “What we provide is just that connection. Today, people in the military can do more than just call and talk. They can Skype, email, send videos and communicate in real-time.”

At no time are those connections more important than during the holidays.

“We’re thrilled to be working towards bringing these services to ships deployed around the globe. Not only will Viasat’s connectivity significantly enhance mission capabilities, these services offered to naval forces will ensure loved ones can stay connected during the moments that matter the most.” —Ken Peterman, president of Government Systems

Since 2012, Viasat – working with the Navy Exchange Service Command’s Telecommunications Program – has brought Wi-Fi to hundreds of naval facilities. That keeps sailors from Cuba’s Guantanamo Bay and Bahrain in the Middle East to bases throughout the continental U.S. closer to their loved ones while they’re deployed overseas.

Those sites include Navy Liberty Centers – the equivalent of a community center for enlisted members and guests – as well as their lodging quarters, teen centers, childcare centers, libraries, bowling alleys, RV parks and marinas. Most of the sites fall under the category of what the military calls Morale, Welfare and Recreation, or MWR, facilities.

“Having that capability lets those people who are deployed still be engaged with their families,” Hitt said. “I think it helps keep relationships strong. If your dad comes home and you haven’t talked to him for six months, he’s kind of a stranger. But with technology, you can still help with decision-making at home, and feel connected in your marriage or partnership, and to family.”

The connections also let sailors tap into online education and training, watch movies, game, shop and otherwise relax online. Sailors can bring their own devices, and many facilities keep laptops, game consoles and other devices on hand for them to use.

Service at sea soon to mirror experience on shore

To make the service even more available, Viasat is working to bring a similar service to sea. This would give sailors access to the same personal services aboard ships.

“We’re leveraging the things we’ve already accomplished in commercial air, government and ground into the maritime market,” said Viasat program manager James Polzin. “If I can sit in a passenger seat on a plane and have all these capabilities, I should be able to do that in the middle of the ocean.”

Viasat now provides in-flight service to 1,000 commercial aircraft on both domestic and global flights. It also provides connectivity to more than 400 senior leader aircraft within the U.S. Government.

ViaSat-2, which went into service in early 2018, extends maritime coverage over the North Atlantic, the Caribbean and the Arctic Ocean.

The human side of connectivity

While other companies already provide the connections needed for tactical work on ships, the personal online services provide another important function – helping maintain the enlisted members’ morale and family connections during long stints at sea.

Without the service, sailors relaxing in a ship’s lounge areas are limited to watching a pre-selected movie of the day or one television program at a time.

“If the person ahead of you likes SpongeBob SquarePants, you’re stuck watching it until they leave,” Polzin said. Viasat’s service will let sailors use their own devices or government-supplied ones as they wish – watching Netflix, video-chatting with family, reading the news, doing online banking or shopping.

Military officials and others who participated in a recent demonstration of the services gave it an enthusiastic thumbs-up. Viasat is now working towards bringing this new capability to its government customers at sea.

“We’re thrilled to be working towards bringing these services to ships deployed around the globe,” said Ken Peterman, president of Government Systems. “Not only will Viasat’s connectivity significantly enhance mission capabilities, these services offered to naval forces will ensure loved ones can stay connected during the moments that matter the most.”