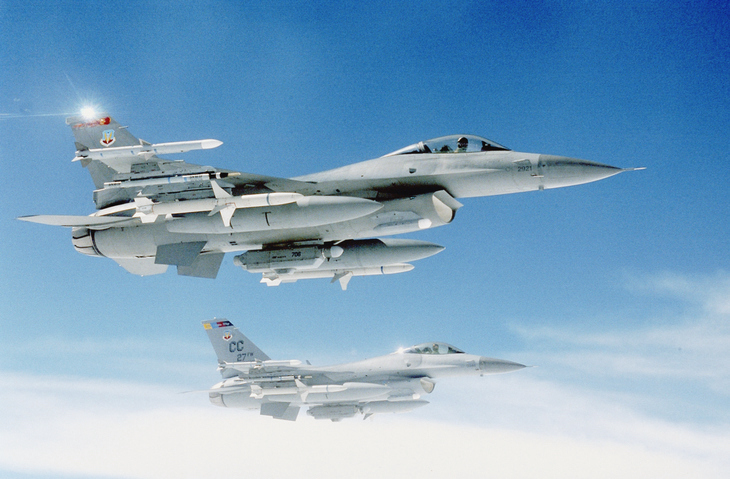 F-16 Falcons heading for a Red Flag exercise in Nevada.

“Train as you fight, fight as you train” is a well-known response when military leaders are asked about the importance of training and the systems used in training. The U.S. Air Force takes training very seriously — especially that which will help defend against known and postulated threats such as high-performance radar, offensive cyber, and electronic warfare systems.

Earlier this year, the Air Force acquisition team at Hill Air Force base, UT released a request for proposal for the Range ID/IQ Support Effort, or RISE. And just recently, Viasat — and several other industry leaders — were awarded large indefinite delivery/indefinite quantity contracts to support the Air Force as it modernizes training ranges.

This ID/IQ contract, which allows for an indefinite quantity of services and deliverables over the five-year ordering period, represents the largest ID/IQ win out of Viasat’s Tempe, AZ facility. The contract seeks support for the Air Force’s threat radar systems and combat training ranges, which includes a wide range of services — from providing infrastructure and tools support to prototype modeling and simulation, acceptance testing and other demonstration requirements.

Leading the effort for Viasat is program manager Alan Ostrow, who formed a response team that spanned the globe, with Viasat leaders in Carlsbad, CA, Tempe, AZ, Englewood, CO, Duluth, GA and Dublin, Ireland contributing to the proposal.

“Viasat’s expertise and experience position us to lead across this ID/IQ, and we’re excited to develop technology and solutions with the Air Force to significantly improve pilot and air-crew readiness,” Ostrow said. “Our team has a lot of great ideas that align with the outcomes the Air Force hopes to achieve through RISE.”

For instance, the Air Force asked for insight on creating a Model Based System Engineering (MBSE) environment for RISE and to propose an electronic document management system to help manage the huge data demands of this modernization effort. Viasat has applied MBSE principles and tools to an ever-increasing range of programs to streamline document collaboration, approval and distribution process from concept through development, certification, and operations of training sites and systems.

Viasat is a world leader in range control and tracking radar systems, and our Duluth, GA facility provides the critical knowledge to support, upgrade and improve the Air Force training range systems via RISE. Another identified focus area of the contract is the need for flexible, large-scale, live-threat simulation capabilities.

Viasat, along with the other awardees, will now compete for various task orders under the ID/IQ, with work contracted from Hill Air Force Base, Utah through June 2026.