Virtual Honor Wall lets employees pay tribute to loved ones who served in the U.S. armed forces over the years. 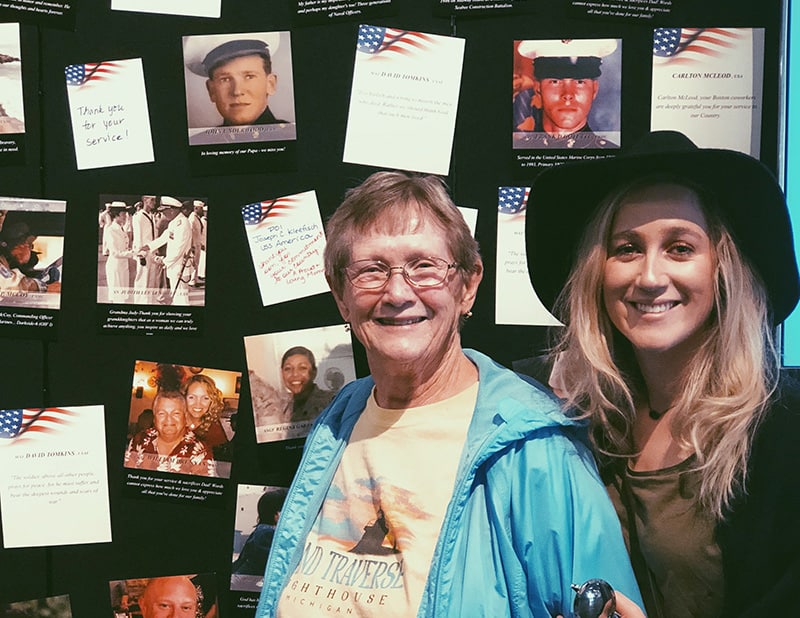 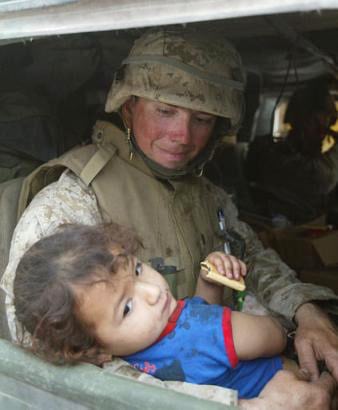 Marine veteran Paul Keener is seen here with an Iraqi girl in 2003. Now a cyber security lead at Viasat's Carlsbad headquarters, Keener placed this photo on the company's Honor Wall to remember this moment in 2003, when he comforted the girl shortly after her parents were killed.

Viasat cyber security lead and retired Marine Paul Keener still thinks about the 5-year-old Iraqi girl he comforted just after she became an orphan. That moment, which occurred days before the 2003 Fall of Baghdad, was among the most poignant in his 27-year military career, and one of many he contemplates each Veterans Day.

“I wonder how she is doing and what path her life has taken,” he said. “I’m hoping her memory of most of that day is blocked.”

Keener was 30 in 2003, a first-time father who’d left his baby daughter at home to serve. When a black Mercedes tried to drive past a checkpoint in an apparent suicide mission, the Marines who were there followed orders to engage the car, killing the girl’s parents. The child in the back seat survived with a broken foot, and the battalion executive officer lifted her into Keener’s arms, knowing he had his own new daughter.

“The goal for me was just to provide some care and comfort on the worst day of her life,” Keener said. “She was scared. I took her and gave her a gentle hug, and I gave her a Fig Newton; she loved that.

“We took her back to our regimental aid station and took care of her foot. I found out later she was reunited with family on the outskirts of Baghdad.”

Keener, who retired from the Marines in 2017, posted a photo of himself holding the girl on Viasat’s Honor Wall. Images on the wall were streamed internally at Viasat during the company’s Military Appreciation Week Nov. 5-9.

It’s one of many moments that come back to him on Veterans Day.

Another is of watching the April 9, 2003 fall of Saddam Hussein’s statute after coalition forces invaded the city. Marines used an armored vehicle to help bring down the 39-foot brass monument.

“That was the only time I’ve known I was in the midst of a history-making moment,” he said. “You’ve got Iraqi citizens everywhere, putting flowers in your flak vest.

“We ended up pulling it down because the Iraqis were trying and couldn’t. To leave it up would have been symbolic of the Iraqis’ inability to shake the yoke of Saddam.”

Trained as a communications officer who worked in cyber security for the Marines, Keener found a natural segue to civilian life at Viasat. Keener leads the company’s Cyber Security Operations Center, Red Team, and is also an adjunct professor in Cyber Security Operations and Leadership at the University of San Diego and an Expeditionary Warfare School instructor for the Marine Corps University.

For Keener, this weekend will be a two-day tribute to the military, including the Nov. 10 birthday of the Marine Corps and Veterans Day on Nov. 11.

“We’re going to buy a cake and celebrate the Marine Corps’ birthday, and we’re just going to enjoy the fact that God allowed me to return from multiple combat tours safely during 27 years of service so I could be with my family,” he said. “The day is really an opportunity to recognize people who decided to put their names on a blank check that potentially includes sacrificing their life for their country, and the ideals this country stands for.”

Isabella Lenhoff’s grandmother was a groundbreaker,

Judith Lee Lenhoff enlisted as a Navy WAVE, (Women Accepted for Volunteer Emergency Service), and was one of the first women to be recognized and awarded on base at Pensacola.

She met her future husband while in Navy training and later left the service to raise their sons. Her service inspired Isabella Lenhoff, a Viasat marketing specialist, who posted her grandmother’s photo on the Honor Wall.

“One of the reasons I submitted that picture is she, as a single mother, raised three sons by herself and was the first woman to receive this award,” Lenhoff said. “She has always just been such an inspiration to all her granddaughters. She’s always encouraged us and showed us that as a woman, we can achieve anything. Being a woman doesn’t make a difference.”

The Lenhoff family took Judith Lee Lenhoff to see the photo, which was also displayed on a wall at downtown San Diego’s USS Midway Museum in early November.

“We wanted to thank her for her service,” Lenhoff said. “She was truly just speechless. She was so appreciative we were honoring her.

“To me, Veterans Day is a sobering yet celebratory day. Having multiple family members and friends who have served … it is always a day when I take a step back and appreciate the sacrifices made for me.”

For retired Navy Chief Petty Officer Brett D. Robinette, serving in the military was an extension of his family’s culture and a way to pay tribute to a relative who gave his life for the country.

Robinette’s father and all four of his brothers served in the United States Navy. Another relative, sailor Charlie Anderson, died during the 1941 attack on Pearl Harbor. All their photos were on Viasat’s Honor Wall, and Robinette said he could trace other family member’s military contributions back to the Revolutionary War. 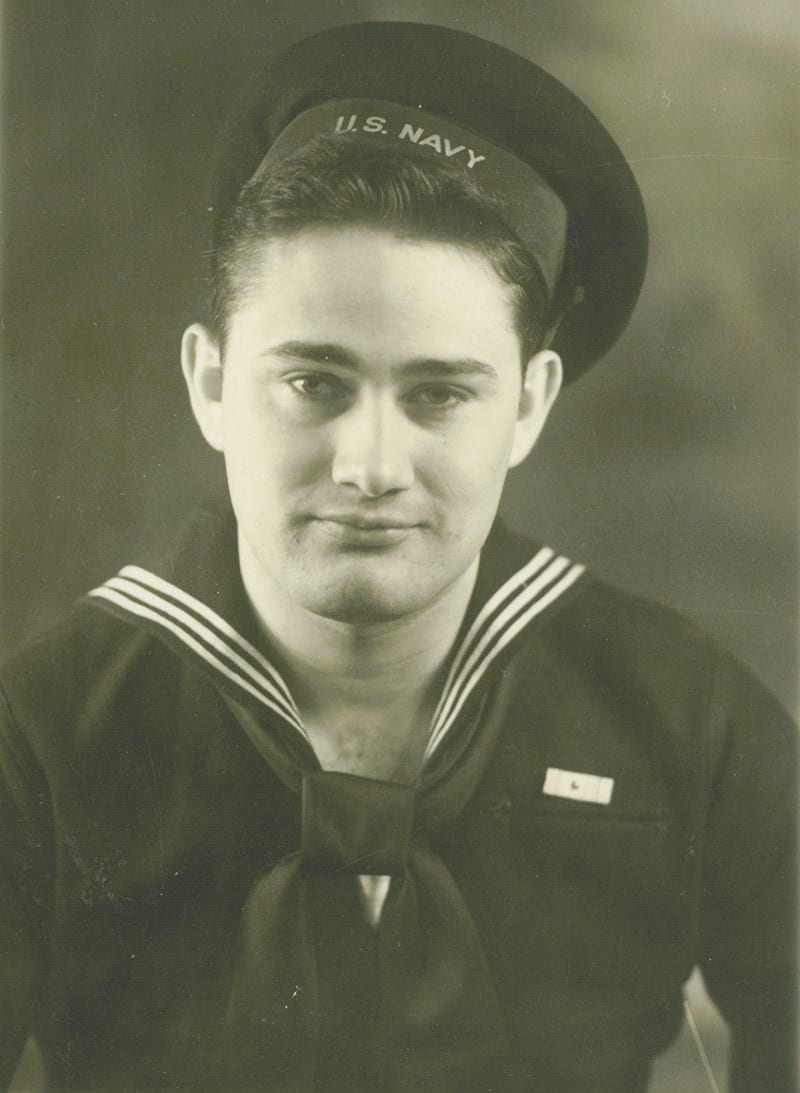 Navy veteran and Viasat employee Brett Robinette recognized his relative Charlie Anderson on the Viasat Honor Wall. Anderson was killed in the 1941 attack on Pearl Harbor.

“It ended up being part of our tradition,” said Robinette, who works at Viasat as a technical training instructor/developer. “My dad always said the opportunity to serve was one of the greatest he ever had. And as a farm boy from Oregon with a 6th-grade education, he received so many benefits from it.”

The Navy gave his father the training and education he needed to eventually work as a lead airline mechanic and support his family.

In 1980, Robinette followed in his family member’s footsteps and joined the Navy, serving 15 years that included participation in Operation Desert Shield and Storm. While there were many tough days, Robinette’s memories of his service are generally positive.

“I enjoyed my time,” he said. “It was a combination of the knowledge of serving your country and the camaraderie of this new family you became a part of that was so enjoyable. I’m still friends with a lot of those guys, even though it’s been 20 years.”

For Robinette, Veterans Day is a time to feel grateful.

“I’ve been all over the world and have seen how things work in other countries; we have a great deal here in the U.S.,” he said. “I hope we don’t take it all for granted. I hope people take that time to count their blessings and to realize Veterans Day is more than a barbecue.

“I have people tell me thanks for my service. It’s hard to react to that because to tell you the truth, it was an honor.”