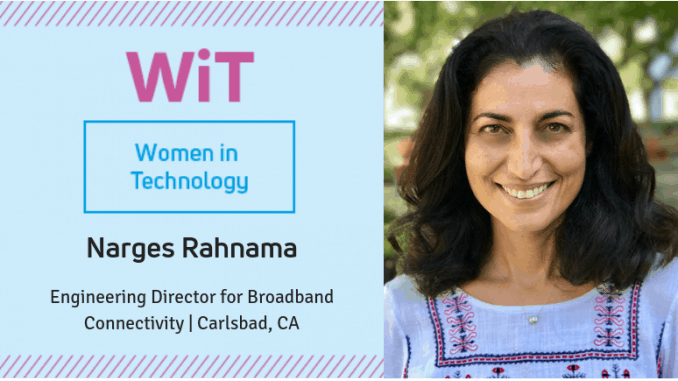 More than perhaps most Viasat employees, Narges Rahnama has a sense of how access to the internet could change lives in other countries. Rahnama was born in Iran and immigrated to the United States shortly after the revolution there in 1979. As Viasat’s engineering director for broadband connectivity (BBC), Rahnama believes communication can be instrumental in achieving peace. “I think about what the presence of internet service in my home country would mean for remote areas that don’t have it – how they would perhaps then view Viasat and the United States,” she said. “I’m hopeful we could translate that into bringing harmony on some level between the people of different countries – even if our governments can’t get along. “That’s an exciting thought.” Nowhere does Rahnama feel better positioned to influence those changes than at Viasat, which is on track to become a worldwide internet provider in the next few years. “I am really excited about being a global company,” she said. “And being part of broadband connectivity – it’s where the secret sauce is happening in terms of our network. When I see everything that is being talked about, the technologies we’re going to get involved with, how we’re going to be innovative – I have no doubt we’re going to be very successful in becoming a global service provider.” Iran ranks among the least-free countries for internet access, according to independent watchdog organization Freedom House. Its National Information Network is a tightly controlled domestic intranet which users and website owners access through a government account, and it uses internet filtering to remove content considered ideologically inappropriate. Had her parents not left there when Rahnama was 16, her life today would be very different. The country changed quickly after the revolution, shifting from a pro-Western monarchy to a conservative, anti-Western theocracy. “In a matter of three years after the revolution, I didn’t even recognize myself anymore,” she said. “I was a fifth grader when it all started, and when I went back to school for sixth grade, everything I had been used to had changed. They separated boys’ and girls’ classrooms, and later they separated the whole school. Music wasn’t really allowed anymore. Very slowly, they started asking us to be more and more covered up in what we wore – no more short sleeves or skirts. The next year, the hijab was mandatory. Then we had to wear really loose clothing.” While Rahnama’s parents weighed the difficult decision to leave their home country, Rahnama felt the changes from the perspective of a young teen. “At that age, I wasn’t necessarily thinking ‘what does this mean for my future’; I just knew it was going against everything I wanted to do and be involved with,” she said. “I wanted to listen to music, laugh out loud in the streets, have nail polish on my nails. “My dad fortunately had the foresight to say, ‘I have two daughters, this is not going to be the country I want them to grow up in’. He made it possible for us all to move.” The family moved to southern California, where Rahnama’s aunt lived.

After college in 1992, Rahnama started as a member of the technical staff at Viasat – which was then “a tiny little startup.” She stepped away after several years to raise her children. Though her family was her priority, she worried that getting back into the tech field someday would be a challenge. For a few years, she joined her father in the real estate industry, enjoying the flexibility it afforded for time with her children. But she missed the challenging work she’d had at Viasat. And in 2012, she rejoined the company’s government sector, managing customer platforms. Since returning to Viasat, Rahnama’s continued her career growth. About a year ago, she accepted her current position in the commercial sector, a job unlike any she’s previously held. Rahnama oversees the training, development, education and management of the department’s engineers. “Stepping into this role is a learning opportunity every single day,” she said. “What I really like about Viasat is you are free to reinvent yourself. Whether it’s a change in the type of technology you’re involved with or a complete change in what you do, your only limitation is really your own imagination.” Even more powerful for Rahnama – thinking about the changes connectivity could someday bring to the world. “Perhaps not every person living in a developing country will have the opportunity to immigrate to the U.S., and if they can be better connected to the rest of the world through the services that Viasat can and will offer, more voices can be heard and more thoughts can be shared,” she said.