Viasat came in fifth place in Bicycling Magazine's annual list of the most bike-friendly workplaces. 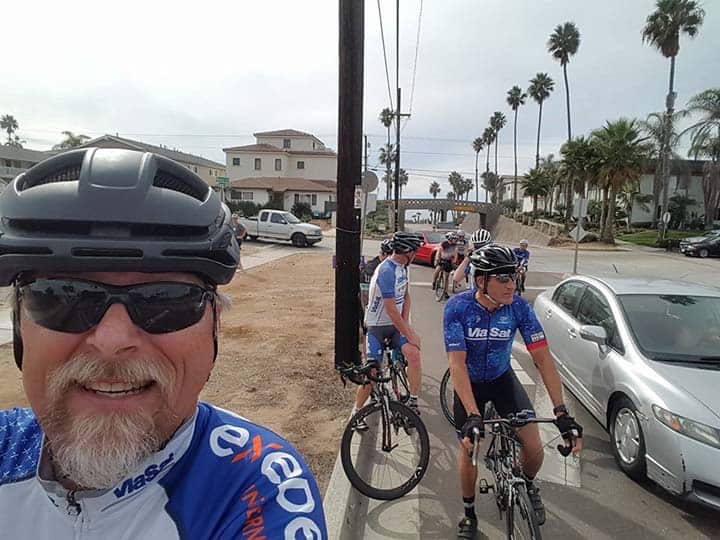 Bicycling Magazine recently confirmed something Viasat employees have known for a while: If you’re a cyclist, this is a great company to work for.

Cycling event reimbursements, points for cycling that can add up to a health insurance premium discount, interior bike racks, showers and a campus bicycle fleet are among the many factors that helped Viasat earn its No. 5 spot on Bicycling Magazine’s 2017 list of Bike-Friendly Workplaces.

“I think it makes you a better employee. And I think every employee who rides would say that.” —Larry Bice

But the company’s passion for cycling was ignited well before then. Bice started working for Viasat at our Carlsbad, CA headquarters in 1999. Even then, a group of mountain and road cyclists rode daily at lunch.

“And that’s just continued and grown along with the company,” he said. “I’ve never heard anybody get mad at somebody for going for a lunch ride as long as it doesn’t interfere with their job.”

Bice keeps a bicycle in his office and rides almost every morning before starting his day.

“I think it makes you a better employee,” he said. “And I think every employee who rides would say that.

“It’s also how I started meeting people outside my department. You meet people bike riding you would never normally meet. That’s very good not only from a social but also a business aspect. If I have a question about something, I usually already know something about it, or who to ask because I ride with them. It’s a good way to get a better understanding of the entire company.”

With a 12-building campus, bicycling in Carlsbad is also functional.

“We have a fleet of 75 beach cruisers to help get people to and from buildings – and because it’s fun,” said Viasat Wellness Specialist Christa Nelson.

Carlsbad employees aren’t the only ones sporting Spandex and helmets. Denver’s campus is located just off a major east-west bike route, and several Viasat employees regularly commute to work and/or cycle competitively on weekends.

Viasat participates all across the country in Ride Your Bike to Work Day, helping promote commuting by bike as a healthy alternative. The Carlsbad campus hosts a break station during the annual event each year.

Riders who participate in as many as four annual cycling events can also get a partial reimbursement on entry fees.

Every Viasat campus is equipped with showers, and while most people don’t attend meetings in Spandex, casual dress is the norm.

“Viasat’s always been a healthy company,” Bice said. “And bicycling is just one of the many healthy things people here enjoy doing.”