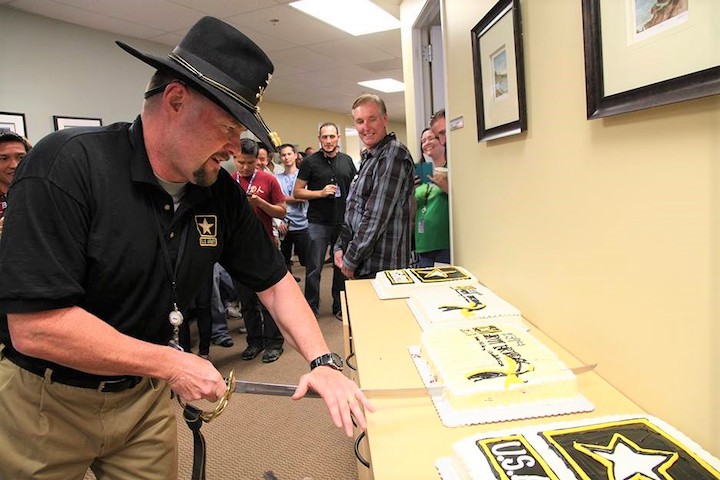 Viasat's Buddy Carman, a former U.S. Army colonel, cuts the cake with a saber to celebrate the Army's birthday at Viasat in a prior year. Carman expects the on-site celebration to resume in 2022.

Viasat’s Director of Mobile Satellite Services Buddy Carman had a distinguished and adventure-filled 25-year career in the Army. Those experiences shaped him as a person and put him on the path that led to his current job with Viasat. Every year, he pays tribute to the Army by celebrating its birthday.

But the service he now looks back upon wasn’t in Carman’s original plans. He was sworn in as a cadet in the Army at 17 as a way to pay for his college education. He was so young his mother had to sign the contract with him.

His intention was to spend just four years in the Army ROTC (Reserve Officers' Training Corps), use its scholarships to pay for his undergraduate education and then go to law school. Instead, he served 25 years.

“I had some really good experience with mentors who said I should at least command a company,” he said. “I did that and enjoyed it. And then I just had kind of a unique career path, and was excited about the opportunities. I had a lot of really interesting assignments with great people.”

Carman’s military career as an armor and cavalry officer took him to Desert Storm, Germany and Iraq, as well as to Brazil to learn Portuguese at the Defense Language Institute, and to the White House Military Office – which provides military support during White House functions.

Carman was selected to work in the White House, and served there as director of operations during the Sept. 11, 2001 attacks. After 9/11, he coordinated with other government agencies to transform the planning and training environment and improve communication between key agencies. He then commanded the Army’s first Stryker Cavalry Squadron as they deployed into combat.

As a colonel, Carman dealt with requirements for brigade mission command, which included ensuring the proper digital tools were available. He learned about Viasat in 2010 when the Army selected the company to provide Blue Force Tracking 2 network.

Carman’s varied military experiences gave him a set of skills that transferred smoothly into his work with Viasat.

“By changing positions every few years, you get a brand-new problem set; I got put into a lot of situations where I was told to go fix something,” he said. “It’s really rewarding when you can identify root causes and start building people up so that they feel they’re important, understand their contribution, and see that there’s a path toward getting better.

“You recognize that everything is done by teams, and each person plays a part in that. And that’s one of the things that’s been good about the transition to civilian life. The teams I have here at Viasat are really great, and the work we’re doing in emergency response with Mobile Satellite Services can literally save lives. It’s important work, and our team has great camaraderie; it’s a good environment.”

On 14 June 1775, Congress Resolved, “That six companies of expert riflemen, be immediately raised in Pennsylvania, two in Maryland, and two in Virginia… [and] as soon as completed, shall march and join the army near Boston, to be there employed as light infantry, under the command of the chief Officer in that army.”

Growing event to return next year

Carman is so grateful for his time in the military that in 2012 he launched a celebration of the Army’s June 14 birthday on Viasat’s Carlsbad, CA campus. The event started small – with a cake in a conference room – but quickly grew.

“Next time I decided to bring beer and we got a lot more attendees,” Carman laughed. “It grew every year from there. I cut the cake with a saber and we sing the Army song. It’s been a fun tradition.”

Viasat director and former Marine Adrian Haskamp added to the event by scheduling veterans’ workshops on the same day, so veterans emerging from the workshop join the celebration.

The United States Army was founded by the Continental Congress on June 14, 1775, to raise troops to fight in the American Revolution, which began on April 19 that same year.

Honoring the day is a tradition, especially among soldiers and veterans.

“Celebrating each military branch’s birthday is a big deal within the services,” Carman said. “Part of it is recognizing the traditions. But it also adds to the legacy of what you did and why you did it. And it’s a reminder to be thankful for everything you have.

“It’s also nice for those employees who didn’t serve; we have a lot of military customers, and it’s good to understand their traditions.”

The event was put on hold during the pandemic, but Carman expects it to return in 2022.