How satellite service in Brazil helps connect the schoolchildren of Pacaraima

In Brazil, Viasat is working with Telebras to bring high-speed internet to the entire country — including areas outside the reach of traditional providers — to help bridge the digital divide. 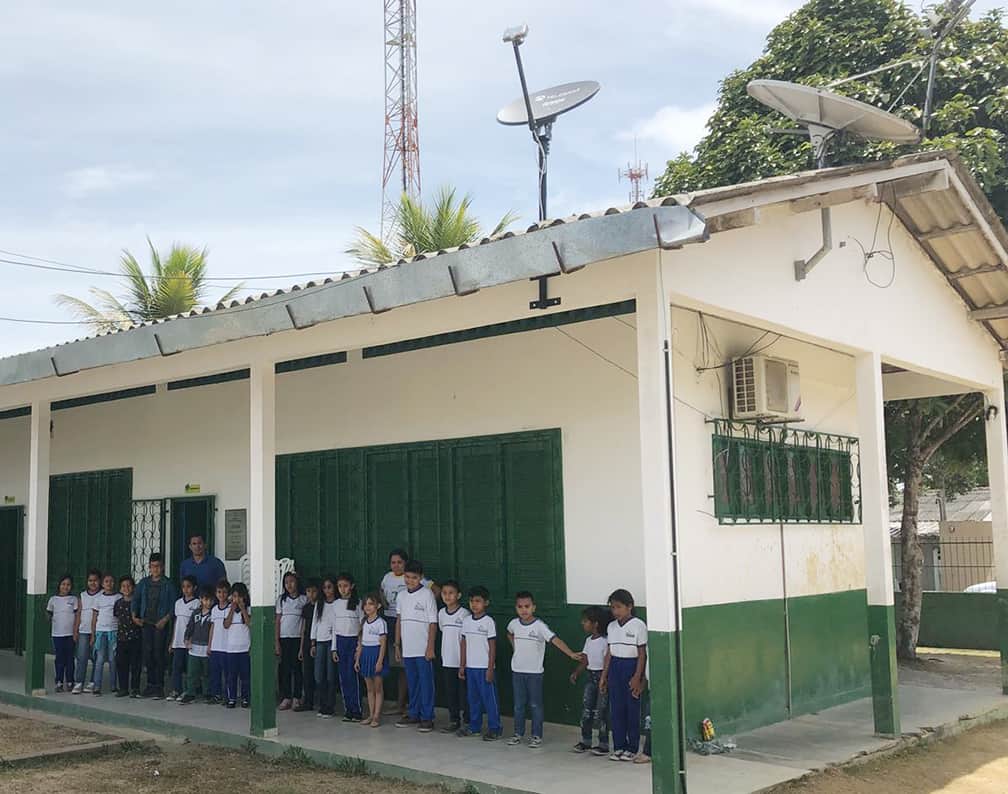 On a clear day in early April, the children at a primary school in Pacaraima, Brazil gathered and began to sing the Brazilian national anthem to a group of visitors. “It was an emotional experience to have them thank us in this way,” said Viasat’s Juan Loera, one of the visitors that day. “It’s something I’ll never forget.”

Pacaraima, located in Roraima state near the Venezuelan border, has recently attracted international news. As the only border crossing between Venezuela and Brazil, the town has absorbed many Venezuelan refugees fleeing deteriorating conditions in their home country. The humanitarian crisis has strained the resources of the area, which lacks the infrastructure to support the overwhelming number of refugees. One of the key necessities Pacaraima needs is high-quality internet for its schools and government institutions. Brazil has a robust online learning program for public schools, but the schools and many parts of the town have only legacy satellite service that cannot support the schools’ use of these online learning resources.

But on that recent spring day, the school children sang and cheered because the internet worked as never before for them. Every laptop in the computer room was online, and many students were streaming. Their visitors that day were satellite technicians from Telebras and Viasat, and they had installed a modem connecting the school to Brazil’s first high-speed Ka-band satellite covering the area, SGDC-1.

“These kids were really missing out,” Loera said, noting that the new service is 10 times faster than what they had. “Once we had it installed, they were on their laptops doing their homework, Googling sites and giggling. For them this is not some luxury — it’s a necessity.”

For Loera, Viasat's international operations manager, traveling to Pacaraima was a unique opportunity to see how today’s satellite technology enables children eager to get online.

“It’s easy to see how the SGDC-1 satellite will benefit Brazil’s children in remote areas, and the power it has to change the economic future of these areas,” he said 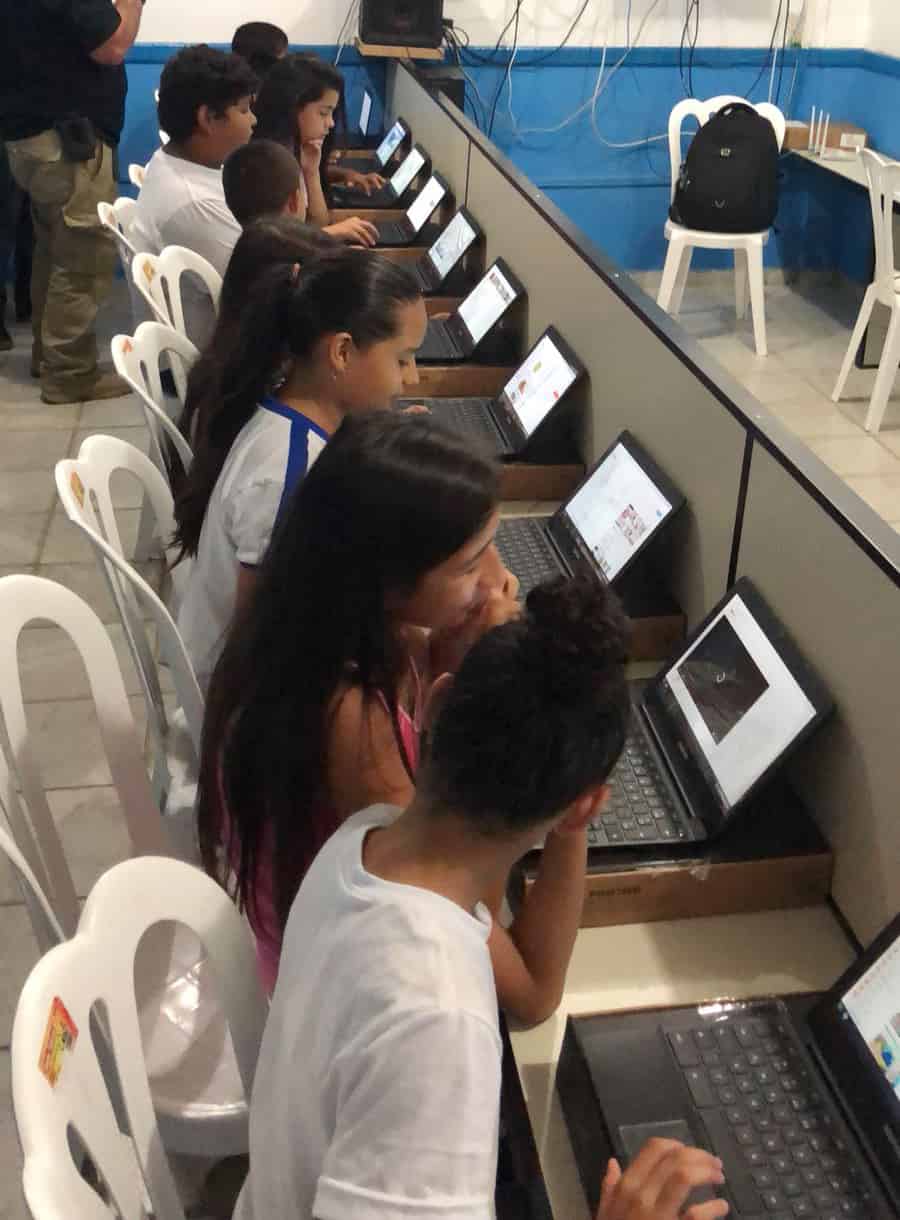 Children at a school in Pacaraima, Brazil enjoy faster speeds in their computer lab after the new service was installed.

Launched in early 2018 and operated by Telebras, SGDC-1 is a powerful satellite that can serve the entire country. Telebras needed a partner to help build the satellite’s ground network and facilitate the delivery of internet service to parts of Brazil that are difficult to reach, and they selected Viasat for this role in late February, 2018.

Recognizing the need to move quickly, Viasat had the ground segment operational in less than 30 days after the contract was signed. Viasat and Telebras technicians hurried to Pacaraima to install the new internet service at three schools and, crucially, a military station near the border crossing between Venezuela and Brazil in Pacaraima. Although a misguided court ruling halted further installations, Viasat and Telebras are eager to continue addressing the country's digital divide by connecting Brazilians with new satellite internet service, no matter where they live.

For the millions of school children in Brazil who live outside the country’s urban areas — where high-speed internet is more readily available — a strong and reliable internet connection is essential to their education. Brazil is a world leader in distance learning programs aimed at providing better education opportunities to all of its citizens, but the lack of high-speed internet in many regions of the sprawling country can make it difficult to deliver those services.

“We moved heaven and earth to make this happen so quickly,” Loera said about the Pacaraima sites. “It was a miracle.”

For now, the court ruling has halted the rollout of internet service to more schoolchildren. The legal challenges, principally brought by satellite competitors, are now working their way through the Brazilian courts. Absent the court ruling, up to 1,000 more schools, health clinics and government sites across Brazil could have been installed by now.

“We’re very hopeful that this situation will be resolved soon so we can continue partnering with Telebras to bring high-quality internet to Brazil’s unconnected citizens,” said Lisa Scalpone, Viasat’s general manager for Brazil. “Telebras is operating the satellite, the ground network is up and running, and we have equipment waiting to be transferred to the sites. We know people all around Brazil are waiting for this new service.” 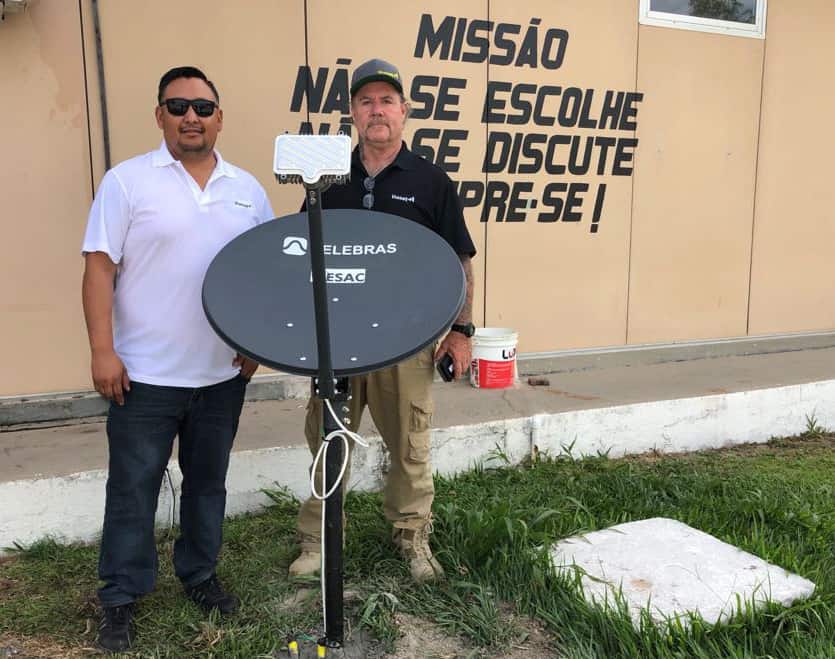 Juan Loera (l) and Mike Holley of Viasat were instrumental in working with Telebras to get the first installations done in Brazil.

Scalpone said she understands why some may be concerned by the selection of Viasat as the partner for Telebras, given Viasat’s recent entry into the Brazilian market.

“Viasat brings its experience with modern satellite networks to Brazil,” she said. “But I think it’s important to understand that we have had plans to invest in Brazil for a long time and believe in a long-term commitment to Brazil.”

Two years ago, Viasat announced that its next satellite — Viasat-3, due to launch service in 2020 — will cover Brazil. In addition, Viasat estimates that it will invest tens of millions of dollars and deploy numerous additional resources in Brazil under its partnership with Telebras.

“We believe that providing assurances to Telebras and the people of Brazil that we can provide service to each and every town is an important part of our commitment to Brazil,” Scalpone said, adding that Viasat has a track record in providing internet service to remote villages. “In Mexico, we have provided internet service to villages that were bypassed even by 2G cell service. We offer an affordable Wi-Fi service that people really love.”

For his part, Juan Loera said the installation team is ready and eager to get back to work. His experience in Roraima showed him how valuable the service is for people who’ve suffered with slow internet for so long.

Brazilian school children thanked the team that installed their new satellite internet service with an assembly featuring the singing of the state of Roraima's national anthem.