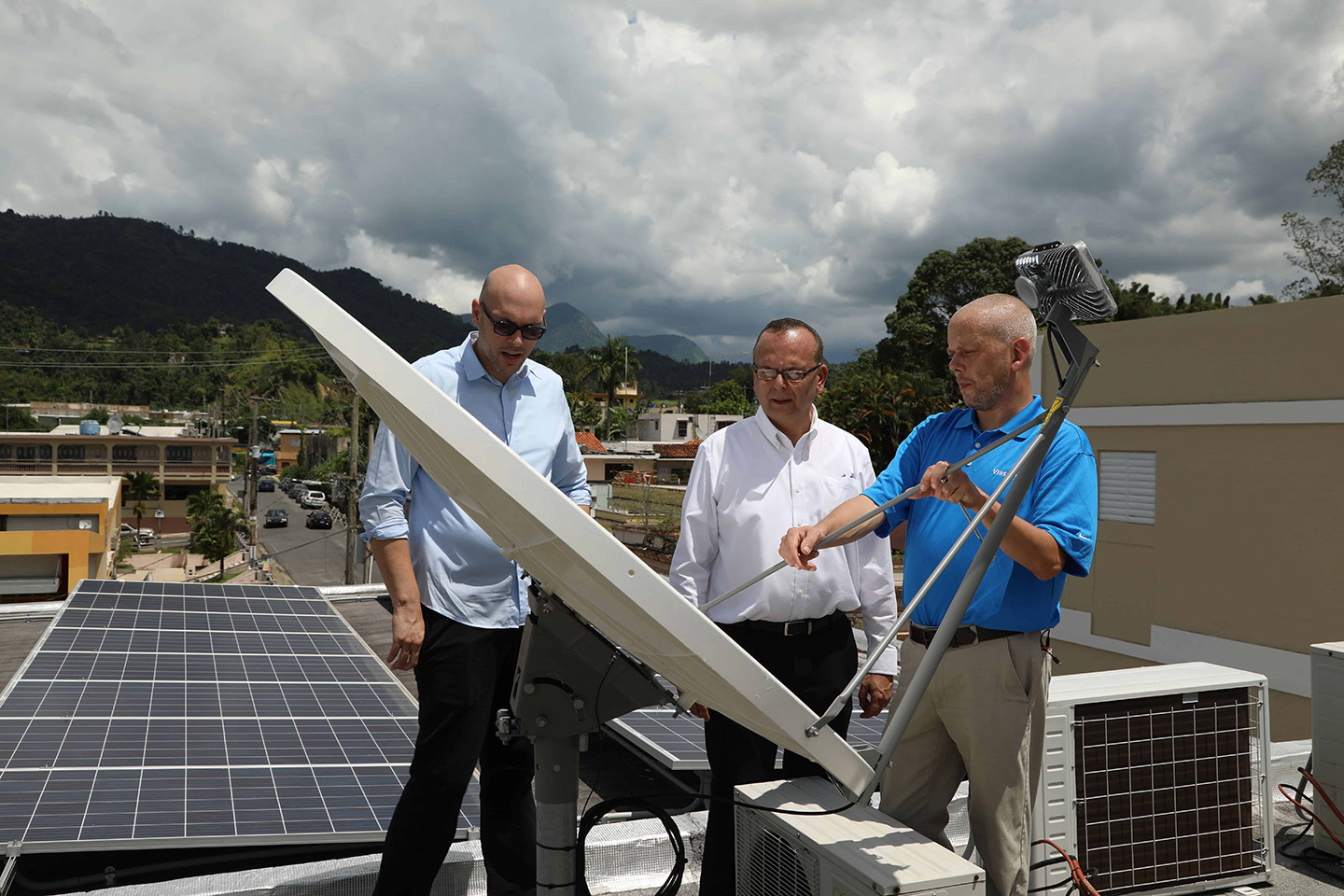 The 2017 Atlantic hurricane season was catastrophic. The three most aggressive storms, Harvey, Irma, and Maria, caused billions of dollars of damage and took thousands of lives. In the months following these hurricanes, our employees sprang into action: Overall employee giving skyrocketed 42 percent, most of which went specifically to hurricane recovery efforts.

For our part as a company, we started exploring ways to use our technology to improve the lives of people in hard-hit communities in Puerto Rico. Since Viasat’s satellite broadband service can be delivered before traditional infrastructure is rebuilt, we saw an opportunity to use our technology to support hurricane recovery efforts — to reconnect loved ones, provide access to vital resources, and rebuild stronger communities.

In early 2018, Viasat employees from various parts of the business presented opportunities for the company to support recovery efforts in Puerto Rico. Our internal Social Impact team worked with leaders around the company to align our business and technology agendas with our Corporate Giving and Social Impact programs, laying the foundation for the donation of Viasat internet service.

We worked in partnership with International Connector, a Bay Area company whose programming includes helping disaster-stricken communities rebuild by using technology to initiate long-term resilience. International Connector had been running resilience-focused workshops in Puerto Rico, and they found that one of the most important elements was access to internet-connected community spaces.

There was a great need for a place where people could receive vocational education and skill-building, get homework help, and stay connected to the world. We worked with International Connector to seek out the right location to make our donation have the most impact.

"Every day, community members come to our locations seeking access to the internet to learn new digital skills, support their homework efforts, apply for a job through an online portal, or help start or expand a business,” said Marti Grimminck, founder & CEO of International Connector. “Viasat’s satellite connectivity is vital to enabling long-term resiliency in these communities.”

In one of its initial visits to the island, Puerto Rico Primary Health Association (ASPPR) — a network of community health clinics with 84 locations across the island — was identified as an on-the-ground partner and resource. Each ASPPR clinic is deeply embedded within its community, with staff who understand the needs of the most vulnerable people after a disaster. After the 2017 storms, ASPPR clinic workers were on the front lines of hurricane response and outreach, especially in some of the most remote areas. 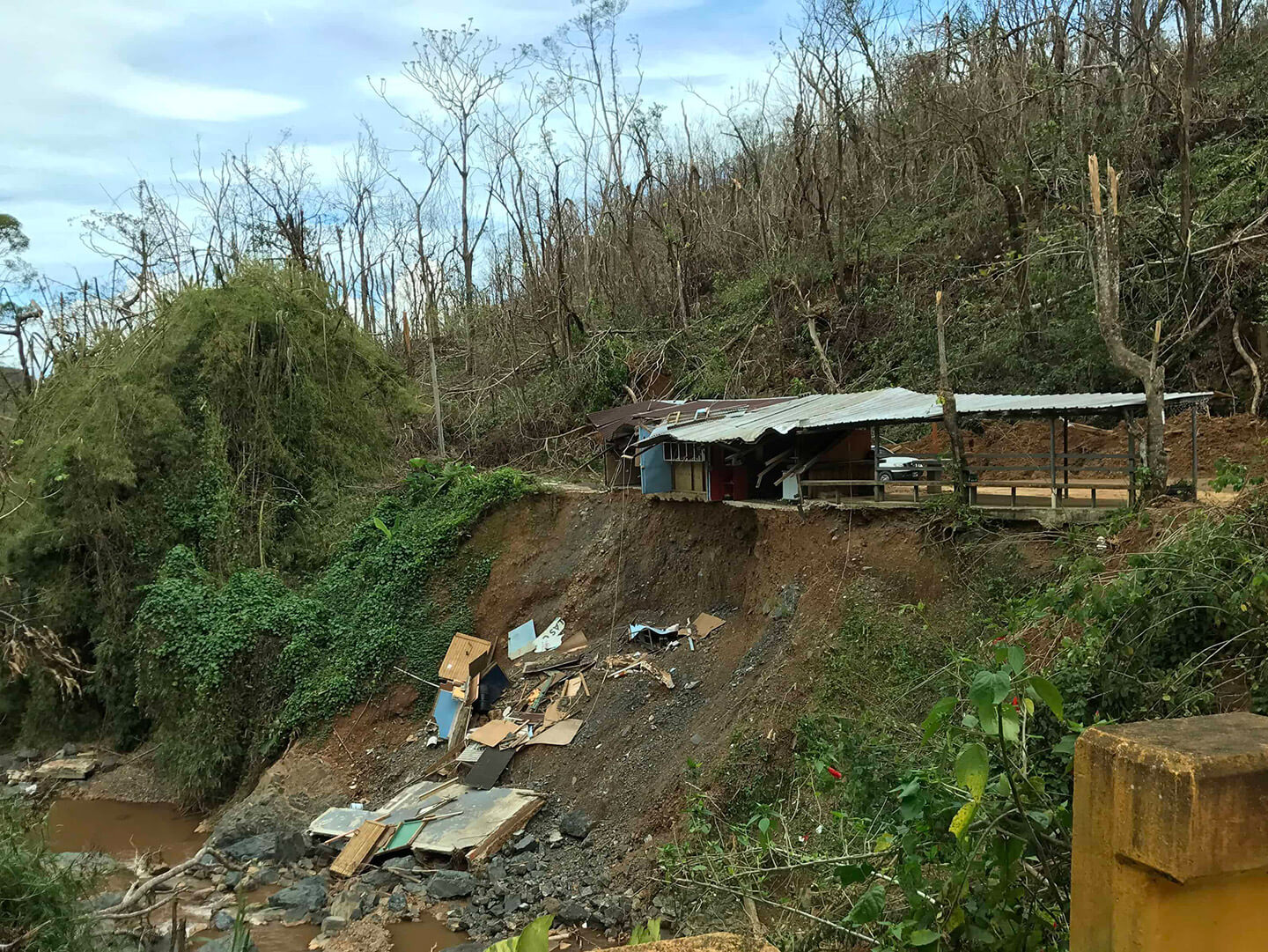 Finding the most impactful location for our service

In July, after much discussion and planning, a small team of Viasat employees traveled to Puerto Rico on flights donated by our commercial airline partner, JetBlue. We performed site assessments and met with community members in devastated areas across the island to determine where we could build a connected community space — or “Innovation Hub” — equipped with Viasat internet and computers for the community to use.

“At Viasat, we believe access to the internet and the freedom to connect are fundamental human rights,” said Melinda Del Toro, Viasat’s Chief People Officer. “The ability to connect to the internet has the power to impact lives and communities in tremendously powerful ways. In providing connectivity to the hubs in Arroyo and Utuado, we were able to make a positive impact both on the community’s more immediate challenges as well as with longer-term goals for the people and the economy in Puerto Rico.”

It was during the site-assessment conversations that we learned about the role that resilient connectivity could have played after the hurricanes, and the difficulties that arose without it. Families were unable to get in touch with one another, recovery efforts were delayed, and almost every resource was strained as a result.

We set up our program in two initial towns: Arroyo and Utado.

Arroyo, a town of about 19,000 residents on the southeastern part of the island, was especially affected by the storms. And it was having difficulty recovering. Before the hurricanes, Arroyo was already facing economic difficulty, with poverty rates at a staggering 50 percent. Since one of the main goals of the Innovation Hubs was economic stimulus, the ASPPR clinic in Arroyo was a natural choice as the first location.

Rosa, the site director of the clinic, was eager to take part and offered an open space for our Innovation Hub to be established.

“The Innovative Hub Resilience project is a powerful communication tool for the communities of Arroyo Puerto Rico, through which our youth and adults obtain internet as a window to the world's opportunities,” she said. “This resource allow them to be themselves in their purpose of rising again after the devastating hurricane Maria. Thank you Viasat, International Connector, JetBlue and all these giant collaborators from Arroyo, Puerto Rico."

Our service in action

Since establishing the Innovation Hub, over a thousand people have visited and logged more than 3,000 hours online. Ninety-five percent of visitors lack internet access at home. The Hub has held more than 20 workshops and employed a local college graduate to provide operational assistance. It has also supported visitors seeking help with homework, job applications, online health information, and more.

Tory See leads Viasat’s Social Impact team and believes she has the best job at the company through shaping Viasat’s overall Corporate Social Responsibility program. She works out of the company’s headquarters in Carlsbad, CA.