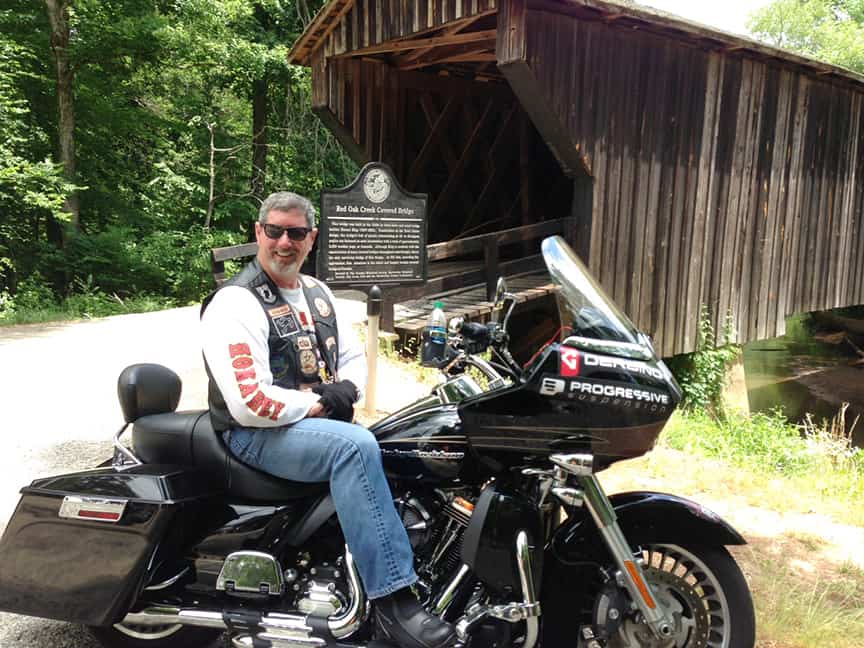 Viasat Mobility Service Operations engineer Larry Murray’s life changed for the better when he competed in a 14,000-mile cross-country motorcycle endurance ride. Now, he plans to use that event to change the lives of others.

Former Airman Murray is collecting pledges for the Wounded Warrior Project, helping fund a Georgia-based retreat where injured veterans can hunt, fish and enjoy nature. The pledges are contingent on Murray’s friend finishing the Hoka Hey Motorcycle Challenge in July.

Murray completed the ride in 2011 and 2013, and wrote a book about the experience.

Named after the rallying call of the Sioux Indians, the event is designed to test participants’ physical, mental and emotional boundaries. Participants can’t use electronic navigation devices and must sleep by their motorcycles – just as Sioux once slept next to their horses.

When Murray started the 2011 event, he set out simply to enjoy the ride and to complete the course. He didn’t anticipate its transformative effects.

“When you’re riding for days on end, all the day-to-day noise you have in your life goes away, what you keep inside rises up,” he said. “The ride gave me a chance to deal with guilt I’d been carrying since an incident while working in Fallujah.

“It took me by surprise. I was riding by myself to the next check point on an early night with a beautiful purple dusk and as I left the Black Hills it just overcame me. I had to pull over.”

Murray’s guilt stemmed from a 2005 tragedy in Fallujah, Iraq, where he and his oldest son Nick were both stationed.  A fellow Marine and friend of Nick’s named Chase had assured Murray he would watch out for Nick.

Murray later learned a vehicle from his son’s unit was destroyed in an explosion, killing the driver. Murray prayed the victim wasn’t his son; he later learned it was Chase.

The sense that his prayer was somehow tied to Chase’s death created a sense of guilt Murray carried for years.

“Rationally I could understand, but irrationally I had felt that praying that it not be my son that had been killed caused it to be Chase instead,” Murray wrote in his book.

That feeling dissolved as he parked on the side of the dark highway during the Hoka Hey Challenge.

“Calm came over me and a sense of relief as the guilt was lifted from my soul,” Murray said. “It was a weight that I had been carrying since that time in Iraq and I had managed to not deal with it up until that time. I felt a lightness that I hadn’t felt in years.”

Murray’s book about the ride, “Tales from the Dead Man,” was written in memory of Chase.

The name stems from passers-by who saw him sleeping by his motorcycle, and repeatedly reported a man lying dead on the roadside.

Fearing for his safety, Murray’s wife has asked him not to do the ride again. Murray still wanted to support the mission of the Wounded Warrior Retreat and recruited another rider to be their Champion to help raise funds during the 2018 event. Viasat, through its Giving program, will match the funds Murray and any other Viasat employee donates to this 501(c)(3) charity.

But Murray doesn’t rule out participating in the Hoka Hey in the future.

“I would love to do it again, maybe someday with one or both of my sons,” he said.

This year’s Hoka Hey Motorcycle Challenge ends and begins in Medicine Park, Okla., with a 10,000-mile course extending through parts of the lower 48 states.

Larry Murray at the start of the Hoka Hey ride.