Vice President of Consumer Services Tom Lookabaugh eager to work on evolving technology at a company he loves. 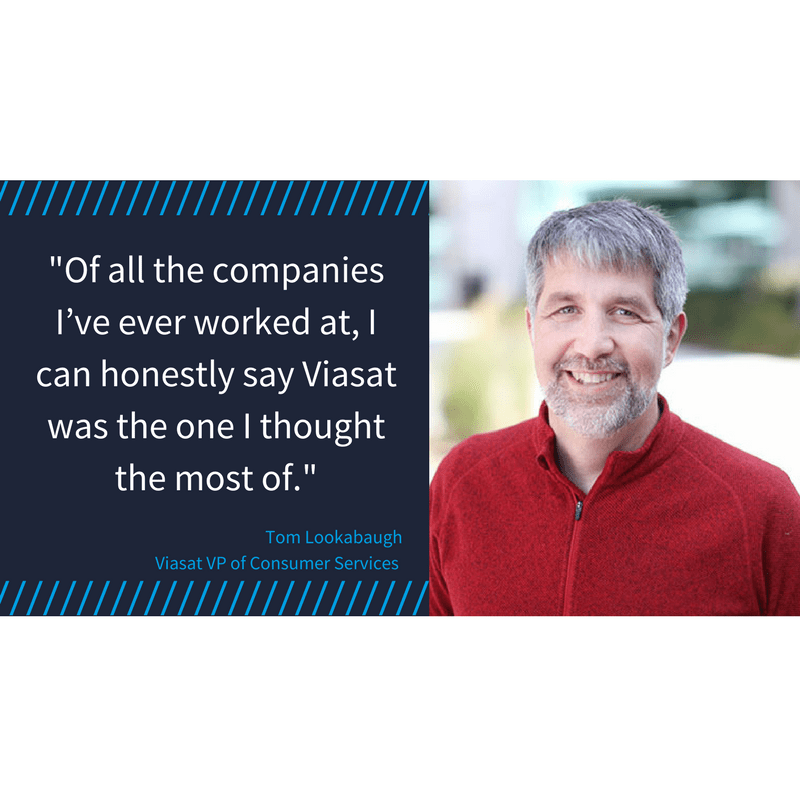 In 2012, one of those roads led him to Viasat. And while he continued on his technology quest a year later, this was the company he couldn’t forget.

The position and place are for him an ideal combination, letting him work on evolving technology at a company he loves.

“Of all the companies I’ve ever worked at, I can honestly say Viasat was the one I thought the most of,” he said. “Other companies may also be doing interesting things, but I like Viasat.

“It has the most unique culture. It’s very flexible; there’s a sense the best ideas and best data trump organization. A lot of companies say that, but I feel it’s more true at Viasat. If you like working on hard problems and have good ideas, they’re not going to get stifled or caught in a turf war.”

Seeing how many of his former Viasat co-workers are still here tells Lookabaugh he’s not alone in his perceptions. What’s perhaps even more remarkable, he said, is seeing how those people have moved to different positions and departments within the company.

“This company accommodates significant changes in responsibility,” he said. “If you’ve shown initiative and have something to offer, you get to try a lot of different things.”

That philosophy dovetails with Lookabaugh’s love of challenges and learning.

He’s served as CEO, CTO and president at several technology companies. He holds five degrees, including a bachelor’s from the Colorado School of Mines, as well as three master’s degrees and a doctorate from Stanford University.

In 2000, he went back to college again – that time as an assistant computer science professor at the University of Colorado Boulder. After five years, he returned to the corporate world.

“Academia is a compromise, like all jobs,” he said. “It’s very rewarding if you’re intellectually curious. The flip side is those organizations are highly political, and can be unpleasant.”

He was Viasat’s Vice President of Commercial Mobility in 2012, leaving in 2013 when CableLabs recruited him. CableLabs is the nonprofit research arm of the cable industry, and Lookabaugh led its research and development team.

Former coworkers urged him to come back to Viasat; it was not a hard sell.

“We’ve got a unique technology edge that gives us a powerful product in the market,” he said. “There’s competition. There’s a regulatory environment. There are challenges. It’s a complicated, hard problem we’re doing well, and it’s important. That’s exactly the kind of thing I want to work on.”

Lookabaugh and his wife live in San Diego, but he has strong ties to Denver, and a deep affection for the state that was once his home. Three of his four children live in the Denver area, the fourth in San Diego. Lookabaugh will split his time between Viasat’s corporate headquarters in Carlsbad and Denver, where much of the consumer services team is located.