Employee No. 8 remembers 33 years with Viasat

Carlsbad company celebrates its 34th anniversary in May 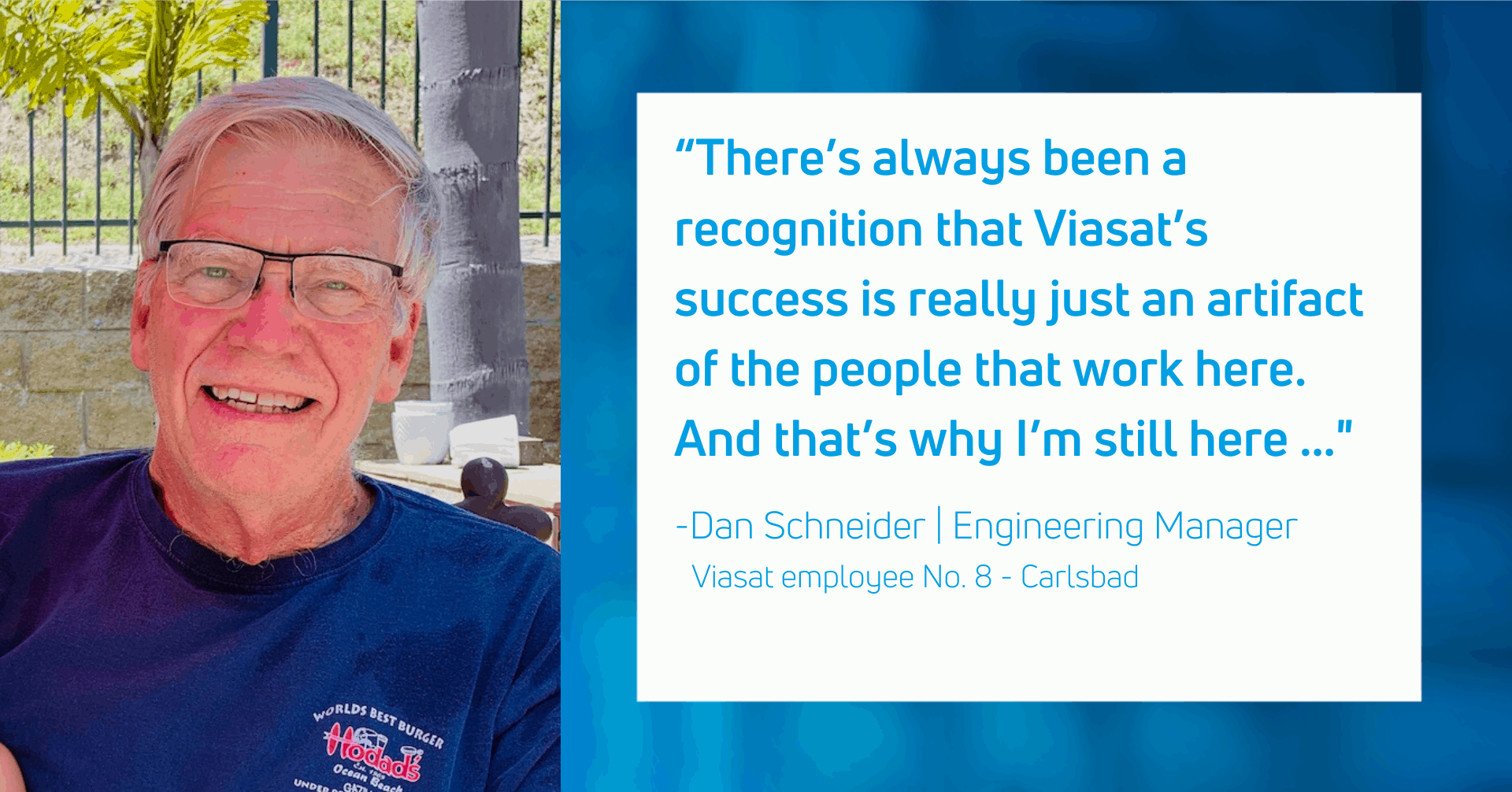 Carlsbad company celebrates its 34th anniversary in May

Engineering Manager Dan Schneider’s first task as a Viasat employee was to construct a set of bookshelves. It was 1987, and Schneider was the 8th employee hired at the one-year-old company. Viasat celebrates its 34th anniversary this month.

“The new guy always got to do the mundane tasks, so that was my first assignment,” he said. “It’s also emblematic of the fact that back then, everybody had a lot of different jobs and responsibilities.

“We at Viasat have always valued really smart, capable people. Then, it was also important that people be really versatile.”

That shelf construction was the first step of a still-unfolding, 33-year career for Schneider. It was a continuation, however, of Schneider’s relationship with CEO Mark Dankberg.

Schneider and Dankberg became friends in college at Rice University, then worked together at Rockwell International.

When Schneider interviewed at Viasat in his early 30s, he’d already worked in engineering, and also had experience with production and operations. That made him a valuable asset to a young company that needed highly skilled, versatile talent. He was hired as a digital design engineer, but he also served as the operations manager, CAD (computer-aided design) manager and the quality department.

“We were opportunistic and hungry,” Schneider said. “It was important to have people that could shift gears and come up to speed on whatever it was they needed to be good at.”

From the start, he said, “I was sold on Viasat. I was a young engineer, and I was excited about the opportunities a start-up provides. And in retrospect, I feel like every employee there had a really significant impact on the trajectory of the company. “

His enthusiasm was also tied to the people with whom he worked.

“In every other place I’d worked, I always felt like I was one of the smartest, hardest-working people there,” Schneider said. “When I got to Viasat, I wouldn’t say I got put to shame, but everybody had those attributes.

“I feel like it’s something that has stuck with us – one of those essential parts of the company culture that we’ve maintained.

Viasat was then located in a small office space on Paseo Del Norte in Carlsbad, CA, just off Interstate 5. The four Apple computers Viasat owned were in a common area shared by all employees.  Higher performance machines — including an Apple II with color monitor and IBM Compatible for schematic capture – were kept on carts that employees shared, wheeling them from office to office as needed.

But that didn’t last long. Schneider watched as the company grew, first within the building. And then into a larger building as Viasat garnered larger contracts that demanded more staff.

Through it all – including the 1996 initial public offering, the continued expansion of Viasat’s offices, new product lines and satellite launches – Schneider said the Viasat culture he saw upon his hiring has remained steady.

“What’s always been true about Viasat is that we are very much employee oriented,” he said. “There’s always been a recognition that Viasat’s success is really just an artifact of the people that work here. And that’s why I’m still here – it’s a great place to work, and I just want to keep it going.”

At 65, Schneider could retire. He chooses not to.

“I feel I’ve had something to do with how Viasat is,” he said. “It’s more like it’s part of me than just a place I work, and I’m not ready to give that part of my life up yet.

“Maybe it’s family. It’s like we belong to each other.”

Launched in CEO Mark Dankberg’s garage with just $25,000 in capital investment, Viasat immediately set off on a road of rapid growth – a pattern it’s continued to follow in the 34 years since.

Viasat was founded on May 9, 1986 by Dankberg, Steve Hart and Mark Miller. All three men are still with the company.

The founders initially worked with tiny microprocessors on circuit boards for the U.S. government. One of its earliest customers was the U.S. Department of Defense, which bought modems for its satellite networks.

From its start creating satellite components, Viasat expanded to launch and operate its own now-growing fleet of satellites. In-house research & development and strategic acquisitions have made Viasat a bigger player every year.

In 2000, the company bought a unit of Scientific-Atlanta that made ground antennas that connect to satellites. Soon after, Viasat started working with Boeing on internet access for airliners, and then won a contract to build residential modems for Denver-based satellite internet provider WildBlue Communications.

It launched ViaSat-1 in 2011 — a satellite with more capacity than any other in space at the time – and ViaSat-2 in 2017. The satellite has 7 times the geographic coverage and nearly double the capacity of its predecessor.

And in 2021, Viasat plans to launch the first ViaSat-3 satellite, a three-satellite constellation that will beam bandwidth to virtually anywhere on the globe. With this constellation, Viasat aims to be the first global internet service provider.