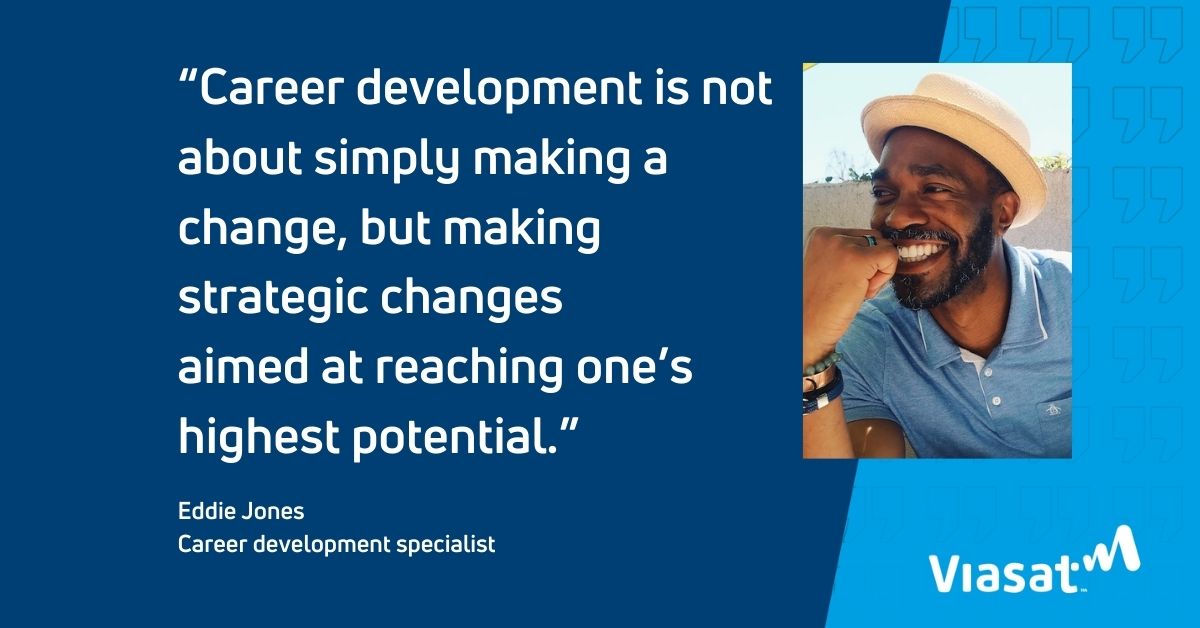 If anyone understands the desire for career evolution and how to make it happen, it’s Viasat career development specialist Eddie Jones. Just over a decade ago, Jones transitioned from sports marketing to his current occupation, a move he once thought was out of his reach. It’s a story he sometimes shares to inspire those he works with.

“In 2010, I was absolutely miserable in a job I was doing — not because of the people but because the work was not as fulfilling to me,” he said. “I experienced depression, loss of confidence and uncertainty. But I’m thankful for it now.

“I started assessing what my purpose was, my values, and how I could bring that to my work. I was very purposeful, and no longer applying blindly. That led me to this work.”

Jones joined Viasat in April 2019 and has since helped introduce and reshape a variety of career development programs for Viasat employees. Most recently, he launched Career & Coffee, a series of informal group conversations on a specific topic, often spearheaded by a Viasat leader. In response to the pandemic, he also helped to transition in-person group career sessions into virtual courses. His work has also included creating workshops for interns and a resource guide with exercises designed to help employees clarify their career decisions.

Creating and executing career programming for a global workforce of more than 5,000 people — especially during a pandemic — has been a steep challenge. But it’s only made Jones more certain he’s on the right path.

“I find peace and value and purpose in being able to be there for people when they’re not entirely certain what their next steps are,” he said. “That’s in part because I’ve been there but also because I want to be a voice of encouragement and support, to let them know that whatever it is they want to pursue, they are more than capable of doing it and excelling at it.”

Viasat’s unique structure offers endless opportunities for employees to advance and grow within the company. While individuals can advance within a specific area (e.g., exploring engineering positions within their business segment) the company’s multi-faceted structure allows employees to grow into completely new areas. A software engineer can — and has — transitioned to marketing. A People & Culture business partner could shift their focus to finance. A talent acquisition specialist may opt to work instead in product development.

Jones is ready to help with any such transitions.

“Career development is not vertical,” he said. “It’s very much like a web. You can make lateral, diagonal or vertical moves. It doesn’t have to be a vertical progression that leads to management.

“One of the things I tell people is to be mindful of pursuing titles. Titles can be misleading. Instead, understand the responsibilities of that title, and see if those responsibilities align with your abilities and career goals.”

An East Coast native, Jones earned a bachelor’s degree at East Carolina University and later, a master’s in organizational leadership at Northeastern University. Jones was also an athlete who played two years of professional indoor football. That love of sports led him to work for several years in sports marketing, representing college and professional athletics teams and organizations.

But when he realized he needed a change, Jones was hesitant to pursue a role in the corporate world.

“So one of the things I encourage all people to do when they’re considering a career change is informational interviews.”

Interviews with people already working in the position or field an employee hopes to transition to can ease the fears that may sometimes keep an individual from advancing.

“Fear, self-doubt, lack of support or encouragement from those we trust, and even questioning our own ability to do a specific role holds us back from evolving in our careers,” he said. “To overcome that fear takes actually doing or pursuing that thing that scares you a bit. That can include connecting with people that have done those roles or that work and asking them, ‘What does it take?’”

Jones said it also helps to have a career vision, and to then embody the behaviors and actions to reach those goals, including seeking opportunities instead of waiting for them to appear.

“Career development is not about simply making a change, but making strategic changes aimed at reaching one’s highest potential,” Jones said. “Our careers and what we want from our working life evolves and changes. Many of us have this belief that work shouldn’t be enjoyable, which isn’t true at all. It is possible to not only enjoy the work you do, but still want it to evolve and change as we evolve. And when an employee is doing and contributing to work that is purposeful and fulfills them, you get the absolute best of that person.”

When he’s not working, Jones most enjoys pursuing his passion for photography, as well as exercising, meditating and reading.