Checking in with Bizzy Beez 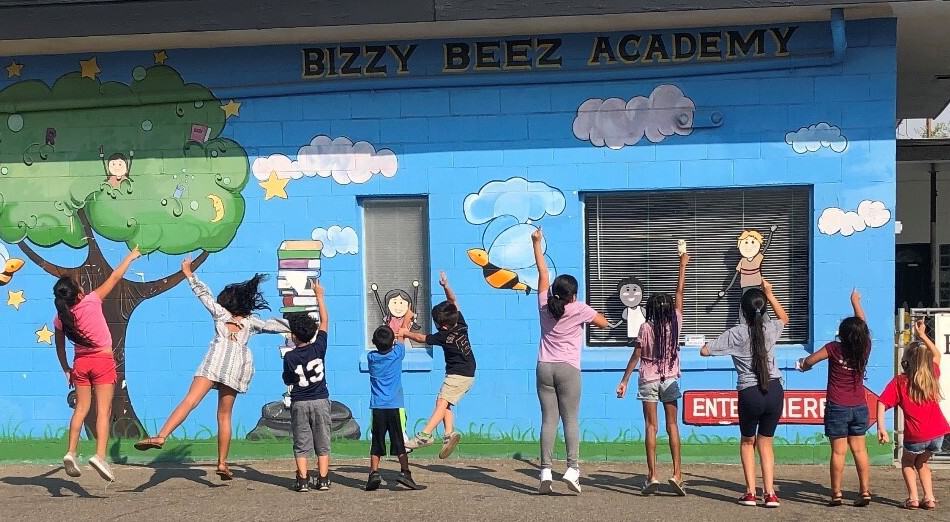 With a financial boost from Viasat, a California day care center kept 14 students safe and in school through the pandemic’s worst days. Viasat awarded Bizzy Beez Academy a grant in late 2020, which gave the childcare center enough money to launch a distance learning program for school-aged children. With the addition of other funds, Bizzy Beez kept the program going for nearly a year.

Along with many children around the world, they recently returned to their brick-and-mortar school.

Academy administrator Shantel Marrero said the 10 months they spent together at Bizzy Beez had a lasting and positive effect.

“They became like family; that was the thing I enjoyed the most,” she said. “They didn’t interact like classmates, they treated each other like brothers and sisters.

“I thought the kids would be saying they could not wait to go back to school, but we were seeing the opposite reaction. They said they were going to miss it here.”

Bizzy Beez Academy is in Tracy, CA, a town of about 100,000 located an hour east of San Francisco. Many of its residents commute daily to the Bay Area. Those long commutes have always made childcare a critical service in Tracy, but never more so than in the past year.

When the pandemic struck in early 2020, most parents stayed home, and so did their children. Enrollment at Bizzy Beez dropped from 80 children to less than 20. The parents of those who stayed were essential workers: nurses, drivers and others who needed to work outside the home to keep their families financially secure.

Marrero faced a tough choice: join most other schools and close, or stay open to care for the children of essential workers. She chose the latter.

“It wasn’t beneficial financially to stay open for so few kids,” Marrero said. “But we just decided not to worry about that. I erred on what is the right thing to do. I knew our parents needed us. So we took every precaution possible and stayed open throughout the pandemic.”

Marrero’s loyal staff stood with her, and reported to their jobs throughout the crisis.

The children they serve included several elementary students who needed a place to do distance learning while their parents worked. Marrero converted an unused classroom into just such a space. Children reported there for nearly a year, donning headphones and logging onto Viasat Business Internet to attend Zoom classes and complete daily assignments.

The $5,000 grant Marrero received for the program was awarded as part of Viasat Business Internet’s Ready. Set. Grow grant program. Initiated in response to the challenging times brought on by the pandemic, the program awarded five small businesses each a $5,000 grant; five others each received a $1,000 grant. Recipients were selected based on their responses to a short series of essay questions.

The grant came just as the Bizzy Beez distance learning program launched, a critical point for its success. Marrero used the money to buy equipment and hire two college students to oversee the classroom.

Later in the year, they received another $5,000 grant from the City of Tracy. Those funds, along with tuition from academy parents, kept the program going until it was no longer needed.

“The Viasat grant helped us out for eight weeks, covering the cost of the program,” she said. “It allowed us to get established, and create a sense of normalcy for the kids. It helped us to start a program that benefitted the families and us for the entire year. Viasat, the City of Tracy and tuition – everything just played a part.”

Marrero believes she’d have found a way to start the program without the grant funds, but it wouldn’t have been easy.

“I’m sure we would have made a way,” she said. “I have a really hard time saying no, so I wouldn’t have turned those parents down. But I didn’t even have to think about any of that. The grant took the weight and stress of trying to figure it out and accommodate so many people. It was just perfect timing.”