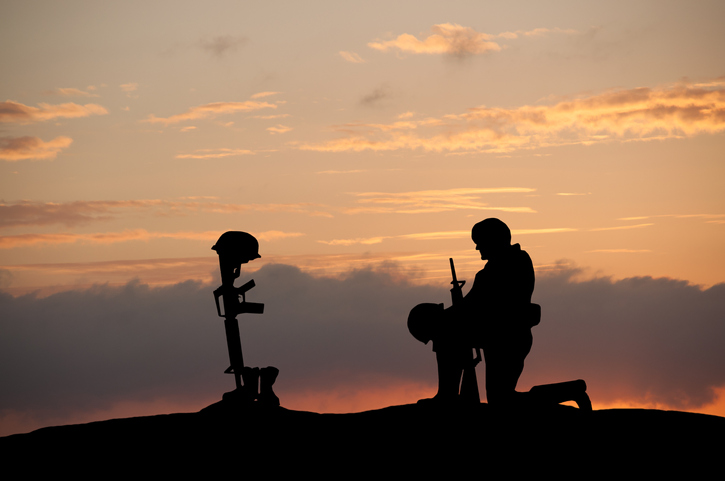 Every Memorial Day, Viasat engineer and former Airman Larry Murray remembers three men he served with who lost their lives overseas. He also thinks about the pain those losses still cause their families. His thoughts additionally include a young Marine named Chase who died in a 2005 explosion that Murray’s son survived in Iraq.

“It feels a little bit more personal on Memorial Day,” he said. “I think about them, and the people it affected.

“I see Chase’s mom’s postings on Facebook from time to time, mentioning that Chase would have liked this or that. I can’t help but wonder about her and how her life has been impacted.”

“A lot of Americans who don’t have a friend or family member who served think of it as a three-day weekend,” he said. “I like to spend that day doing something to reflect. That’s often something that challenges me physically – something a little bit painful, but that helps me to remember.

“The day is not about me. It’s about honoring the memory of those who paid the ultimate price for all of us. That’s what I try to focus on.”

“Memorial Day for me is a time to pause and reflect on the fact that people raised their right hands in defense of the Constitution, and some of those folks didn’t come home,” he said. “It’s really a time to honor those people, and be thankful for those who gave their all.”

The holiday holds deeply personal significance for all three men, so much so that talking about their service does not always come easily.

“I don’t keep those things hidden; I just don’t bring them to the surface,” Nurse said. “To me it feels like bragging, and it was really about doing the country’s business.”

Viasat: A welcome place for veterans

Thirteen percent of Viasat’s 5,600 employees once served in the military. That statistic is a source of patriotism and reverence shared by many in the workforce.

Viasat is a private-sector partner and national asset to the U.S. Department of Defense and coalition military forces, developing and delivering secure defense communications across the globe.

Murray, Nurse and Rogers each were drawn to Viasat because of its military connection.

“As a veteran, I’m proud to work for Viasat,” said Murray, who first learned about the company while serving and working with Viasat equipment.

Nurse sees his position as business-area director of Viasat’s Next Generation Tactical Data Links as an extension of his military service.

“At heart, I am a U.S. warfighter,” he said. “Working at Viasat, there is a direct correlation between what I did then and what I do now. I’m able to give back to the warfighters and make sure the products and services we provide give them a tactical advantage on the battlefield.”

Rogers feels the same. As a program manager with the same Tactical Data Link team, he oversees the integration of the small terminal onto aircraft used by U.S., NATO and Coalition forces to exchange real-time tactical data.

“I am very thankful for the work I do at Viasat,” he said. “My work on government programs and the small tactical terminal allows me to continue to serve in a different and fulfilling way.

“I’m also grateful for the opportunity I had to serve. It helped to mold me into the person that I am today. It is not only worthwhile but humbling to take time every year to remember and honor the memories of those folks.”

The Dawn of Memorial Day

The roots of Memorial Day extend back to the ancient Greeks and Romans, who festooned the graves of those who had died in battle and their loved ones with flowers, and held public festivals and feasts to honor them.

Similar traditions sprang up in America in the wake of the Civil War. That battle claimed more lives than any other U.S. conflict, leading to the creation of the country’s national cemeteries. Family members came to decorate the graves of those fallen soldiers, and by the late 1860s, towns and cities across the country held springtime tributes — then known as Decoration Day — to honor those who had died in battle.

Memorial Day, as it became known over the years, was designated an official federal holiday in 1971.