100 planes and counting: Behind the scenes installing the best Wi-Fi in the sky

As Viasat passes its 100th installation of our Gen 2 equipment, enabling aircraft to be connected to our new and future satellites, here's a look at what it takes to get a plane off the ground with the best Wi-Fi in the sky.

As in-flight Wi-Fi becomes more of a necessity than a luxury for airline passengers, we’ve been very busy here at Viasat overseeing installation of the equipment for our new and future levels of service. With the ViaSat-2 satellite going into service this year, airline passengers will soon have access to even faster speeds than we offered with our previous, award-winning service.

We were very pleased recently to mark the 100th installation of our Gen 2 service on a commercial aircraft, but we didn’t have a lot of time to celebrate because customer demand has installer crews working tirelessly to equip planes with the latest service, where we can deliver speeds up to 100 – 200+ Mbps to the plane. In fact, our Gen-2 modem is capable of supporting throughput levels of up to 1 Gigabit per second (Gbps), allowing airlines to make the most of the advanced capabilities expected from Viasat’s current and next-generation satellite platforms.

As the VP of business operations responsible for overseeing all of this, people ask me all the time what’s involved with bringing high-speed internet to an aircraft 35,000 feet up. Here’s a look at the steps behind how we do it:

Since installation of our antenna requires modification to the plane’s fuselage, the first step is getting approval from the Federal Aviation Administration (FAA). Each model of plane we install on has to have a “Supplemental Type Certificate” showing that our design is safe, airworthy and compliant with all federal regulations. This process can take 10-12 months, so when we get an STC for a new aircraft, it’s a big deal. In fact, we just recently got our first STC for a wide-body aircraft, the Airbus A330, which clears the way for installations on those aircraft in the Qantas fleet.

Since even the same model airplane can have slight differences between carriers, we have to get an amendment to an STC for each new airline. So even though we have that one for the A330 on Qantas, we’ll need to get additional approvals for any other airlines’ A330.

Viasat designs and manufactures the antenna, modem and server for our service, but we work with companies called integrators who specialize in modifying aircraft. They bring their experience to the table along with some additional components necessary for the installation. To optimize aerodynamic performance of the installation, we install a specialized structure overtop called a “radome.” Installing the radome and the antenna is a critical piece of the operation, as it involves drilling holes in the fuselage.

A look at the components necessary for installing satellite internet equipment on a commercial jet.

The radome is made of a high-strength glass/epoxy composite material and must be able to withstand things like a bird hitting it at 400 mph. Given its location on the exterior of the aircraft, installation of the “crown kit” that includes the radome and the antenna is a big part of the process (and, you could say, the most nerve-wracking!).

In the cabin, technicians get to work running all of the cabling necessary to power the antenna, modem, server and wireless access points (routers). These large commercial airliners can have anywhere from four to six access points, including one forward for the pilots. They all need to be hard wired to the server and the aircraft power, and that requires the removal of all the luggage bins and ceiling panels to route all of that cabling. 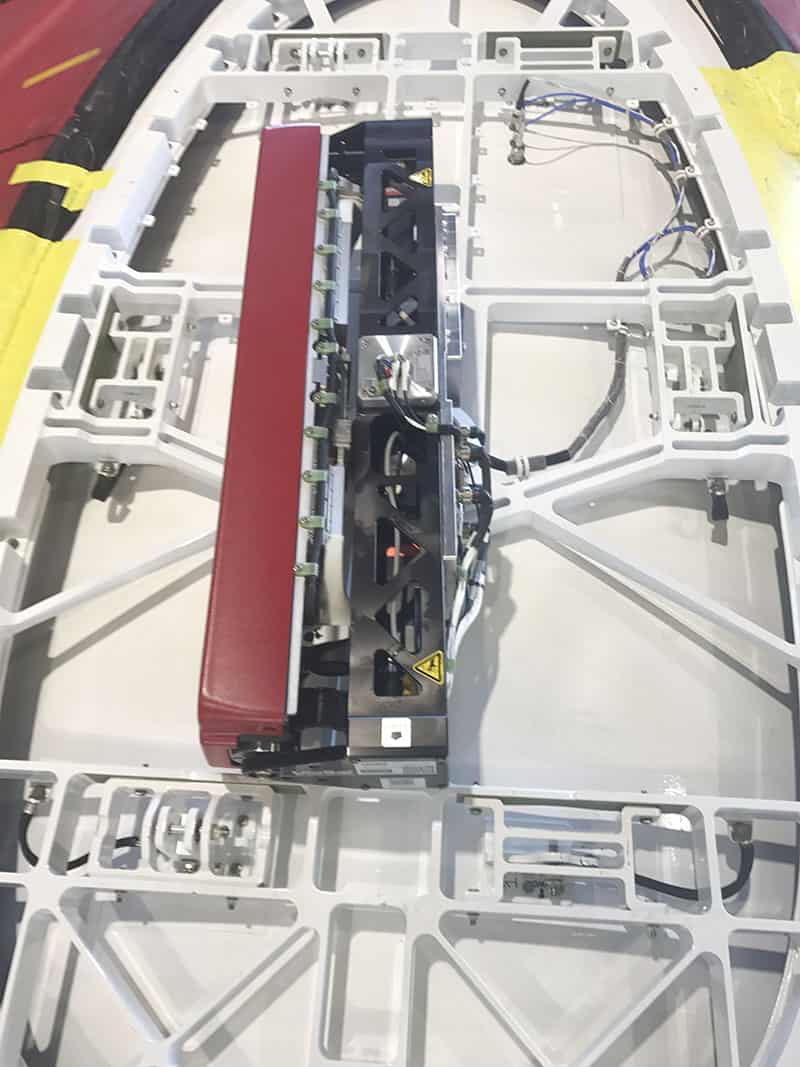 Here's what the Viasat antenna looks like, mounted atop the aircraft, before the protective cover (radome) is installed.

All of this work can take four to five weeks for the “first-of-kind” prototype installation, and it’s often paired with having the aircraft offline for other maintenance. It’s a relatively complex process but one that we’re improving on with each installation. Working with our integrators, we’ve learned a lot and gotten to the point where we have the capacity to perform 45-60 installs a month. We plan to have some 600 aircraft installed with our Gen 2 equipment by the end of the year.

At the same time, some manufacturers are doing “line-fit” installations, which means the equipment is outfitted into new aircraft at the assembly line. Right now, Viasat Gen 2 equipment is being line-fit on new Boeing 737 MAX and 787 aircraft, and eventually we expect to have this option available for most if not all major commercial aircraft manufacturers.

The great thing about this new Gen 2 equipment is that it will be forward and backward compatible. In addition to working for our new ViaSat-2 satellite, it will also work with our other three existing satellites as well as with our planned global constellation of ViaSat-3 satellites. When these are in place, aircraft will no longer have to use a patchwork of different satellites to stay connected. ViaSat-3 will offer coverage gate-to-gate for long-haul flights over vast oceans and continents, meaning passengers can stream Netflix or check work email whether they’re sitting at the gate at JFK or flying over the most remote part of the Pacific.

It’s an interesting and exciting time to be involved with in-flight connectivity solutions. If you’re ever wondering if the flight you’re on has satellite internet, just look for that tell-tale bump on top of the aircraft before you board. Viasat service is on most JetBlue aircraft, many United planes, Scandinavian Airlines, Qantas and soon many American Airlines aircraft — along with other airlines around the world. If you’re not sure whose service you’re getting, check this website for finding out who your ISP is: www.whoismyisp.org/

More and more, the answer coming back will be “Viasat.”