Viasat teams in Europe are busily identifying locations for the ground network that will support the ViaSat-3 satellite when it launches in approximately three years. 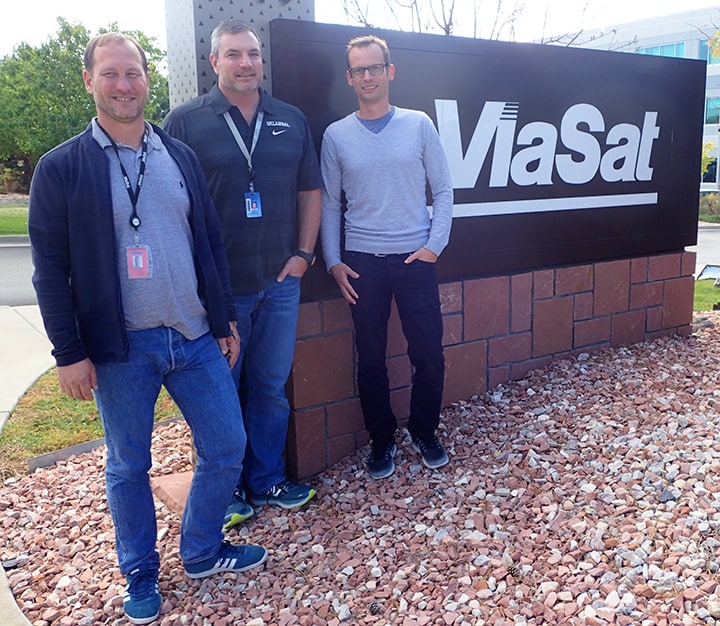 Christophe Gerard’s complex title – European Terrestrial Network Roll Out Manager – is a good match for the magnitude of the work he’s just beginning. Gerard is charged with establishing the ViaSat-3 ground network throughout Europe.

It’s not the first time he’s held such a title; Gerard’s been a rollout and project manager for several fast-growing telecom companies in Europe. But the Viasat project is unlike any other.

“I’ve worked in the past to build up a network, but always for a company that was already there — never from scratch,” said Gerard, who joined Viasat’s Lausanne, Switzerland office in March 2017. “This is a good challenge.”

It’s also a multi-faceted challenge, which is why Gerard will need a sizable team working with him in Europe. He will hire a team that could ultimately grow to 20 people to help execute the rollout.

Gerard is working closely with Denver-based Travis Golliver, who established gateways and infrastructure for ViaSat-1 and ViaSat-2.

Among his many other tasks, Gerard will identify the sites throughout Europe needed for ViaSat-3 Satellite Access Nodes (SANs), the gateways that connect to the satellite.

SANs are strategically placed to maximize the capacity and availability of the satellite. Each SAN includes a compact Ka-band satellite antenna and all the other elements needed to transmit and receive signals to and from the satellite.

The space needed for a ViaSat-3 SAN is significantly less than for ViaSat-2. (You can see the difference easily at the gateway site near the Denver office.) That’s especially important in Europe, Gerard said, where available land is much more limited.

Gerard will help determine the total cost of the European network, develop negotiation strategies and, after establishing the SAN sites, help with design, construction, testing and deployment – all while keeping track of cash flow and creating metrics to measure the program’s success.

It’s a steep challenge in a single country, a far more complex one in a multitude of countries.

“The laws are very different from country to country,” Gerard said. “And the politics are totally different. There are some federal countries and some monarchies.”

Gerard’s knowledge of Europe gives him a leg up. So, too, does his ability to speak four languages. But equally important, Gerard said, is the confidence he has in Viasat.

“We have very good support here in the U.S.,” he said on a recent trip to Denver. “In Switzerland, many people think Americans believe they’re the center of the world, that they don’t want to help you. In fact, it’s totally different. It’s been so beautiful here in Denver to meet the people who are helping us. The first time I came, I left with a big smile.”

That sentiment extends also to the job that lies ahead.

“There is huge work to do,” Gerard said. “But it will be a very nice story – from where we are to where we need to go.”