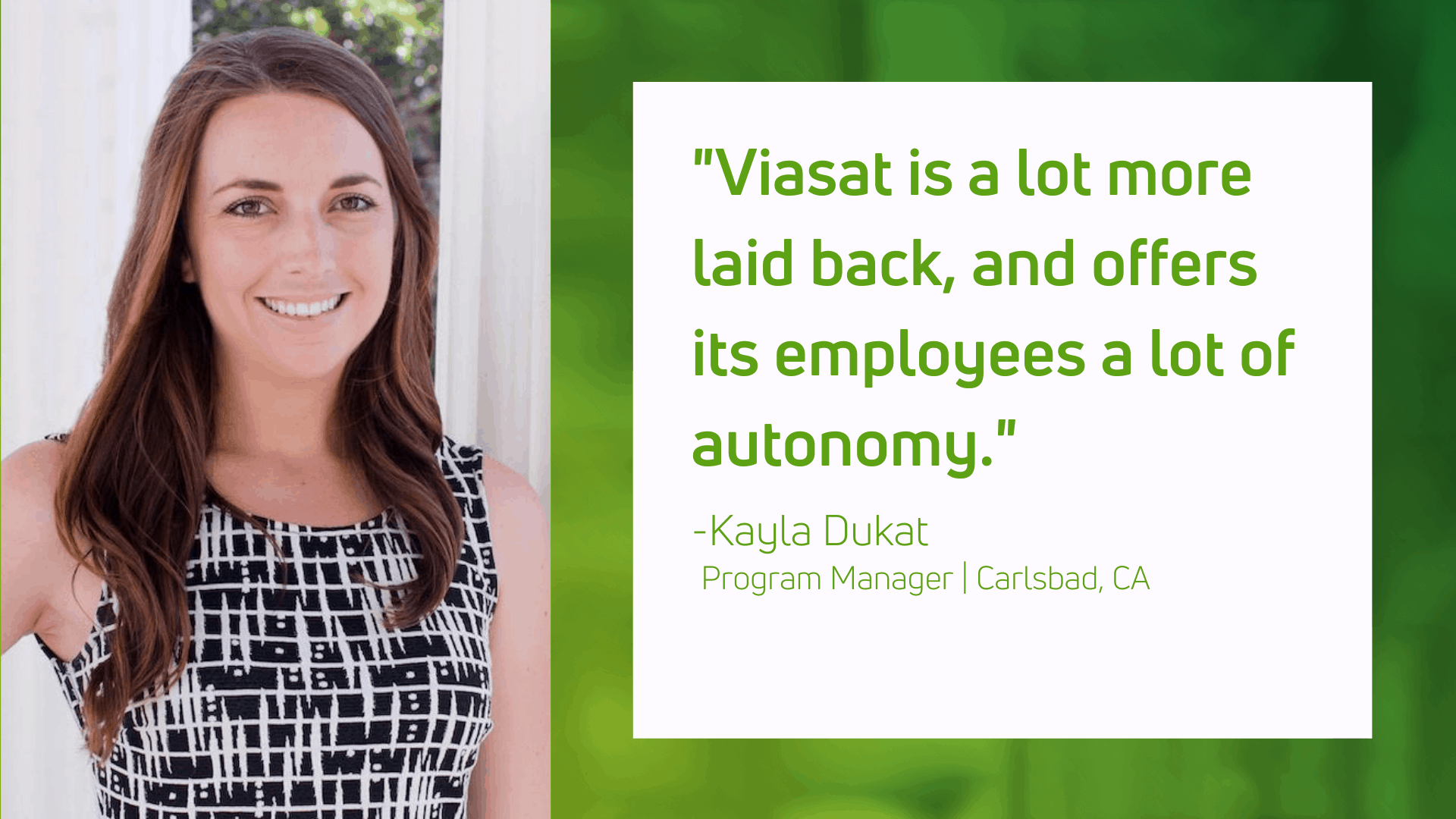 Kayla Dukat was working for another southern California defense contractor when she first learned about Viasat; she had no intention of leaving that job. But her former colleague, Viasat program control analyst Mike Von Berg, felt otherwise.

“I had no idea Viasat existed until he got a job here,” Dukat said. “And he was just constantly telling me, ‘You’ve got to come over here, it’s so great’,” she said. “I was in the middle of grad school, so I didn’t think it was a good time to go to another company. But he was persistent.

“Now that I’m there, I don’t see myself leaving.”

At 30, Dukat is a program manager, overseeing Viasat government contracts. It’s a leadership role she loves but didn’t anticipate when she started at the company in 2014.

“This is an intimidating venue for someone without a tech background to get into; there’s definitely a learning curve,” she said. “But having strong engineering leadership and your project engineer as your right-hand person really helped me take that leap.”

Dukat’s education and initial job experiences were in finance and scheduling, not deeply immersed technology. A native of Escondido, she majored in business administration and management at the University of California at Riverside then completed her master’s degree in organizational leadership at Point Loma Nazarene University.

“I didn’t even consider engineering classes in college,” Dukat said. “It just really didn’t cross my mind as something I would be interested in.

“So I really admire STEM and the other efforts to educate women about these fields. For me, hindsight is 20/20.”

But Dukat gained some knowledge of technology early in her career. Inspired by family members who worked in the defense industry, primarily in engineering, she followed suit, interning with a defense contractor during college and securing a job with another after graduation.

That combination of skills made her an ideal candidate for her initial position as a Viasat program control analyst. And Viasat has proven a fit for her personality as well.

That’s not what she found at Viasat.

“Viasat is a lot more laid back, and offers its employees a lot of autonomy,” she said. “People trust you to get your job done without breathing down your neck. It was those things, plus the little things like free, good coffee, the bikes around campus, the gym and the casual dress code – there were so many things I liked.”

In the six years since she joined Viasat, Dukat has advanced to deputy program manager and in 2018, to program manager. She currently oversees development of a next-generation Link 16 radio. The work is so fascinating, it’s shifted Dukat’s original plan to explore other segments of the company.

“The great thing about Viasat is it feels like a bunch of small companies within one bigger company,” she said. “I had an interest in doing work on the commercial side at some point because I wasn’t sure if I wanted to be doing defense forever.

“Now, working in the NextGen TDL (Tactical Data Links) business area of the government segment, I feel sticking with this area as it grows would be a really great thing.”

It’s not just the job that keeps Dukat so engaged; it’s also her coworkers.

“It’s an amazing working environment; everybody works hard and works well together,” she said. “These programs are highly collaborative. We’re developing software, testing hardware, working towards various certifications and a myriad of other activities and all the engineering functions are continuously working together. As a program manager, having a team that wants to work together is so important.”

“Ours was probably one of the last weddings,” she said. “We got back from our honeymoon in Mexico the next weekend and it was like the apocalypse. I’d taken time off work for the wedding and honeymoon, and we never went back (to the office).”

Working at home has been a challenge, Dukat said, but she again credits her team for a work ethic that’s remained strong throughout the coronavirus crisis. Some of those team members are considered essential, and are still going to work in the office.

“I have mixed emotions about working from home; but the right thing is to stay home and keep those that are going in comfortable,” she said. “It’s about not only adequately doing my job, but supporting the team so they can do their jobs as well.”