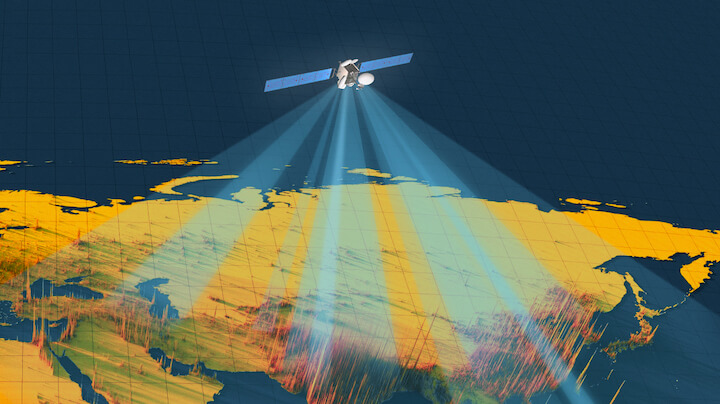 In addition to extraordinary capacity, the ViaSat-3 satellites will also have a great deal of flexibility in directing that capacity where it's needed most.

When the Anik F2 satellite was launched almost 20 years ago, it was the heaviest and most advanced communications system ever unveiled. In 2004, it was the king of content capacity, with 2 Gigabits per second of total throughput. One of the services being hosted on Anik F2 was WildBlue — a new satellite internet provider based in Denver aiming to improve on dial-up speeds in rural areas.

In internet years, 2004 was a lifetime ago. Since then, demand for better speeds and a lot more capacity to handle streaming video has shifted the landscape tremendously. WildBlue added another 7 Gbps of capacity with the WildBlue-1 satellite in 2007.

But Viasat had bigger ideas.

Viasat, which had been providing components for the company, acquired WildBlue in 2009, which aligned with its own quest to build a much higher capacity satellite alongside WildBlue’s established customer network. The ViaSat-1 satellite, launched in 2011, featured an unprecedented 140 Gbps of capacity — at the time more than all of the other communications satellites covering North America combined.

The company followed that with ViaSat-2 in 2017. That brought another 260 Gbps of capacity, enabling much higher speeds and significantly more data to handle the expanding streaming universe. Impressive as this was, the company’s leaders knew the demand for capacity was continuing to grow, and it was going to take much more powerful satellites to keep up.

When the company announced ViaSat-3 — a three-satellite constellation to cover most of the globe, it came with a jaw-dropping figure: Each satellite is planned to have 1,000 Gbps of throughput (or 1 Terabit per second – Tbps), upping Viasat’s total network capacity by over 700%.

“It’s pretty amazing how far we’ve come since the days of Anik,” said David Ryan, Senior Vice President and President of Space & Commercial Networks for Viasat (he was also part of the Anik project). “The 1,000 Gbps of throughput that we expect to be able to provide with each ViaSat-3 satellite has really taken us to the forefront. Demand for high-speed internet has increased by 30-35% per year, and we must stay at the front of the pack. Demand will continue to increase.”

Viasat’s growth will happen with bold expansions in capability that Ryan calls “step changes,” where each advance in technology yields an enormous increase in capacity compared to previous satellites.

“We’re looking forward to the next generation of satellites,” Ryan said. “We are always in pursuit of advances in solid-state electronics that will allow us to move data at ultra-high speeds. This is how we make technological breakthroughs and achieve these huge step changes in capacity.”

While the total throughput capacity of a satellite might mean little to the average end user, the result in service quality is something they most definitely will notice.

“You can use the analogy of mobile phone technology,” said Evan Dixon, President of Global Fixed Broadband at Viasat. “They went from 2G to 3G to 4G and now 5G. And with each of those feature changes, they jump from one generation to another generation. They’re huge investments in technology, with new breakthrough innovations that enable that next advance in technology.”

And every new satellite Viasat launches represents that next generation.

“It’s quite simple: The more data the satellite can provide, the faster the connection will be, the happier customers will be and the more of those customers Viasat will have,” Dixon said.

Viasat is able to accomplish these dramatic technological advances, Ryan said, because Viasat is a vertically integrated company that designs, builds and tests the entire network itself. That includes the satellite payload, the ground systems, the user terminals, modems and more. The only major component Viasat doesn’t build is the part of the spacecraft, called the bus, that provides the power, pointing and thermal control. We partner with industry leader Boeing Space Systems to provide that piece.

“This approach allows the company to test and make changes on the fly, if necessary, to come up with the most efficient way to deliver data to the end user on the ground, in the air or at sea,” Ryan said.

One area the benefit of increased capacity is most evident is in Viasat’s in-flight connectivity service. With commercial airline customers — including  JetBlue, Delta, United, American and Qantas ­— as well as a great many private and business jets — Viasat has proven it’s possible to get connectivity in the air comparable to what you can get on the ground.

“We have really improved service to the airline passenger, that’s for sure,” Ryan said. “We are now able to bring a great deal of speed and capacity to every seat of an aircraft.”

That dramatic bump in the ability to manage more data enables airlines with Viasat service to dramatically change their entire in-flight connectivity and entertainment offerings. Offering robust service available not only to the passengers but to the crew as well enables everything from movie and audio streaming at every seat to much-improved communications for the crew that can help with everything from medical emergencies to live video of weather conditions ahead.

Having all that capacity is one thing, but another is ensuring it can be put to work as much as possible. Compared to low-Earth orbit satellite internet systems, Viasat uses the higher geostationary orbit for its satellites — about 22,200 miles up. At that distance, just three satellites can view almost the entire Earth, whereas low-capacity, low-Earth orbit satellites have only a limited view, requiring hundreds or even thousands of satellites to achieve the same capacity and coverage. And since much of the planet is ocean or uninhabited areas, those satellites spend over 90% of their time unable to “sell” their capacity.

The ViaSat-3 satellites will boast another extremely powerful feature: flexibility. Where once a satellite’s coverage was essentially set in stone before ever being launched, the company’s new generation will be able to move capacity around when and where it’s needed.

“This enables Viasat to provide global service to planes, ships and remote customers continuously and move that capacity according to business needs,” Ryan said. “We can literally point the data stream and turn it on and off based on demand. That’s incredibly efficient.”

Like all satellite networks, Viasat requires a reliable, highly resilient ground network – and each satellite has its own, Ryan said.

“We need an incredible amount of transmit and receive sites on the ground to keep up with the data throughput,” he said. “We are always going to need more and more gateways as we proceed because the way we are doing this is very revolutionary.”

As Viasat’s satellites have grown more sophisticated, the ground stations have increased in number and decreased in size. More of these “Satellite Access Nodes” — or SANS — not only means a more powerful ground network but also one that’s highly flexible and resistant to outages due to the redundancy so many SANs provide.

It’s all about streaming

Not all data capacity is created equal, Dixon says.

ViaSat-3’s capacity will enable something close to what’s known as “natural usage,” Dixon says — a service that allows people to use the internet however they’d like with plenty of speed and fewer instances of data limits slowing things down.

With no slowdown in customer demand on the horizon, Viasat will continue to aim for more capacity to enable greater speeds and data handling.

“We want to scale to more and more customers globally,” he added. “You have people working from home now, in some cases schooling from home and we have a lot of doctors using distance medicine. We must keep up with that demand.”