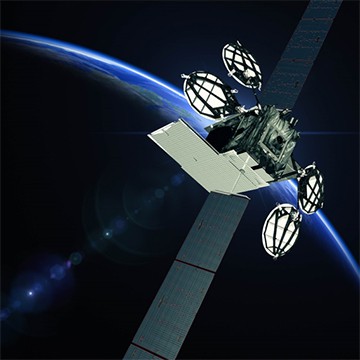 First, a bit about orbital mechanics….

Generally speaking, all transfer orbits have a number of elements in common:

That being said, following launch, a satellite has to circularize its orbit and eliminate any remaining inclination prior to being able to provide service to customers.  These maneuvers are accomplished through firing the satellite’s onboard thrusters. In the case of ViaSat-2,  the satellite uses its chemical propulsion system to circularize its orbit and then uses its electric propulsion to remove inclination and perform all station-keeping.

The differences between chemical and electric propulsion are significant in a number of ways, including:

Within the last few years, fully electric  satellites have become a reality.  This breakthrough technology allows a significant mass reduction in satellites without sacrificing payload capabilities.  This is incredibly important because it allows the use of a smaller and more cost-effective rocket to launch a satellite just as capable as a heretofore large satellite.

With ViaSat-2, we are performing a large portion of the orbit raising electrically as we didn’t look to reduce launch mass, but instead our goal was to increase the payload capability.  In other words, we increased capacity for the same launch mass.  ViaSat-3 will utilize electric propulsion exclusively, thus allowing an even greater payload as a fraction of total launch mass.

One significant difference to electric propulsion is its extremely low thrust, which means it takes the satellite longer to reach its orbital slot. The difference is like comparing the acceleration capabilities of the most powerful Ferrari to that of a Prius.  The Ferrari will out accelerate the Prius at the expense of fuel economy. The Prius will accelerate slowly, but more efficiently and will continue to build momentum over time. That’s what electric propulsion is about – building momentum over time.

Instead of taking about two weeks to complete orbit-raising, which was the case with ViaSat-1, it will take several months for ViaSat-2 to reach its final orbital destination.  The tradeoff is that we’re going to have a satellite with over double the capacity of ViaSat-1 without having to resort to a much larger and more expensive rocket to launch it.