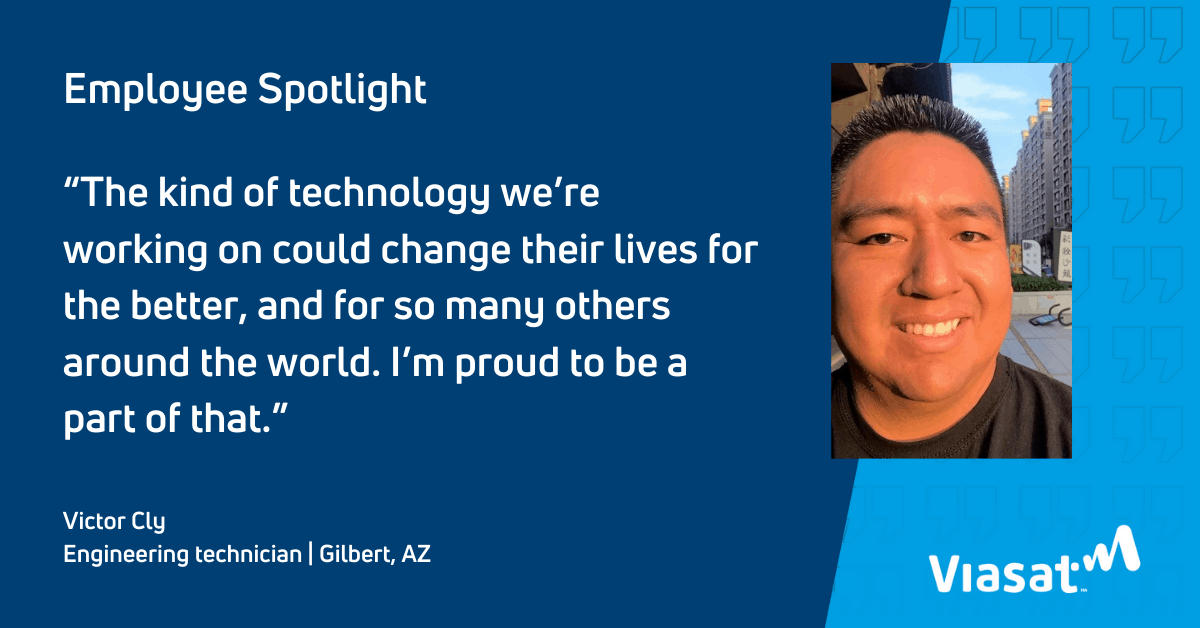 Viasat engineering technician Victor Cly is the first person in his family to buy a house with land. His job with Viasat, he said, made that August purchase possible.

Cly was born on the Navajo Nation, an American Indian territory that includes portions of Arizona, Utah and New Mexico. Land within the Navajo Nation is owned by the U.S. Government, held in a trust for the Navajo people. So while residents there can obtain a long-term, renewable lease of 75 years on the land, and even build a home on it, they cannot own the land itself.

“I consider myself lucky,” said Cly, a father of three. “And my job with Viasat is absolutely why I was able to do it.”

Cly joined Viasat in 2013 as an RF/microwave engineering technician. With the aim of advancing in the company, he’s working toward his engineering degree. He’s based out of the Gilbert, AZ in a relatively new office that opened in February 2020 to help accommodate growth at Viasat’s Tempe campus.

“I love working here,” he said. “I love the work mainly because it’s challenging.”

Cly has no fear of challenge, and plenty of familiarity with it. Born in the Navajo Nation, his family moved to southern California for several years when he was young. They returned to the reservation when Cly was 12, moving in with his aunt. The move was an abrupt shift – from an urban area with modern conveniences to a home without running water or electricity in a small, rural community.

“We only had one store in the whole town – a gas station with a convenience store that carried everything,” he said. “It offered as much as it could to save someone a 40-mile drive to a border town.”

Space in his aunt’s home was tight, he said, but family is central to the Navajo life, and Cly has good memories of his childhood – much of which was spent outside. He worked weekends on his grandparents’ ranch, discovering a talent for work that involved both his hands and his mind.

“I’ve always had an interest in engineering, even when I was young,” he said. “I have this knack for fixing things and just figuring them out.”

He attended high school in Flagstaff, about 40 miles from his home. To lessen the transportation challenges, Cly lived in a dorm for Native Americans, returning home on weekends. The approximately 100 students there were assigned chores, sharing two computers for homework.

For Cly, it was a good experience.

“In a way, we gained our independence,” he said.

It was also where he met his future wife, Celeste. Though the two lost touch during college and married many years later, their relationship gained its foothold in the high school dorm.

Cly earned a degree in electronics and communications engineering, married Celeste and started a family – life changes that required a good job. That search led him to Viasat, where he feels his career has hit its stride.

“I was hired as an engineering technician, but I’m now more geared toward development ­on the commercial side,” he said. “I love the work but I also love the culture. I’ve been working with several of my coworkers for a long time now and we’re definitely a team.”

As much as he enjoys his career and new life in the Phoenix metro area, he hasn’t forgotten his roots. Cly visits family frequently. He’s also worked to help people on the reservation during the coronavirus, buying and donating basic supplies.

“I’m kind of torn,” he said. “I’ve still got a lot of family members out there, and I feel I need to help. Whenever I get the time, my dad and I go to my grandfather’s ranch. There’s lot of work that needs to get done.”

Cly hopes the technology he’s involved with can someday help those still living in the Navajo Nation. Cellphone coverage there remains spotty. And many people can only access the internet by walking or driving to reservation chapter houses – communal meeting spaces – and connecting to Wi-Fi. Even worse, some homes – particularly those inhabited by the elderly – still lack electricity and water.

Those conditions have a domino effect within families.

“The younger generation wants to get an education, but they can’t leave their grandparents behind to fend for themselves, so they often stay,” Cly said. “Having access to the internet would be a game changer. It would let them pursue their educational goals while still staying near family.”

Viasat and other satellite internet services have been installed in the Navajo Nation, but the cost can still be a challenge for some families. Cly hopes new technology – like the solar-powered hotspot prototype University of Arizona students worked with Viasat to develop earlier this year – could have an impact there. The hotspot was designed to deliver Community Internet.

“A lot of these families live close to each other, so it would be enough bandwidth for them to share,” Cly said. “The kind of technology we’re working on could change their lives for the better, and for so many others around the world. I’m proud to be a part of that.”