Viasat’s Duluth, Ga. office at the forefront of antenna technology

In a suburb north of Atlanta, ViaSat employees are at work on the next generation of antennas. 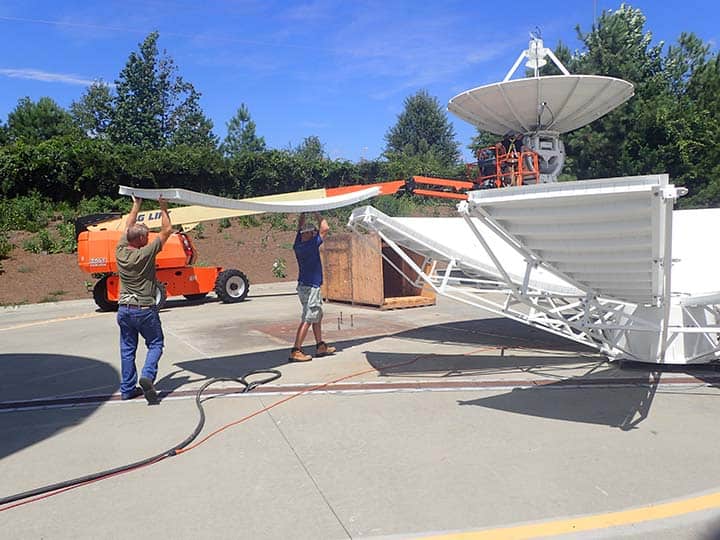 Next time you use Google Maps or Google Earth, take a moment to appreciate the folks at Viasat in Duluth, Georgia. They built the antennas which downlinked virtually all that satellite imagery available on your smartphone.

And that’s just the tip of Duluth’s antenna iceberg.

The team of about 400 employees built the antenna systems at all ViaSat-1 and ViaSat-2 gateways, a critical segment of the extensive ground system that tethers our satellites in space to earth. They also designed the antenna systems for Australia’s broadband network, NBN Co., and created systems for federal intelligence agencies and a wide variety of external customers. Those include our Missile Defense Agency, television broadcasters and business communications systems, among many others.

Duluth staff construct the airborne terminals mounted on both commercial and government aircraft that transmit both internet to commercial aircraft passengers and classified information to military and intelligence agencies.

And they’re heavily involved in ViaSat-3, building not just the ground stations but the radio frequency (RF) links that transmit data from the satellite to the ground and uplink data from ground back to the satellite.

Among the plethora of projects on which Duluth’s staff works, lead staff said none are currently more compelling than ViaSat-3.

“If we mess up on a ground antenna system, it’s really no big deal – we fix it,” said Antenna Systems Business Area Director Ed Sinyard. “If we mess up on an airborne terminal and 150 passengers don’t get internet, it’s a little more of a big deal. If we make a mistake on the satellite, our business is gone.”

General Manager of Antenna Systems Kent Leka agreed, but said, “All the work we do is disruptive in different ways. The airborne market’s disruptive. The satellite’s disruptive. We continue to innovate in antenna systems and disrupt there.”

Potentially the most disruptive, Leka said, is real-time earth access, a service that would give industries monitoring the earth instant access to data from low-earth-orbiting (LEO) satellites. LEO satellites can monitor environmental changes, ocean chemistry, crop health, population shifts, natural and manmade disasters and other conditions — all via sensors that work best in low orbit. But transmitting data from a LEO satellite is delayed because it can only do so when it passes over a ground station. Viasat would accelerate that process by relaying the information from the LEO satellites to ViaSat-3 and back to the ground in real-time. 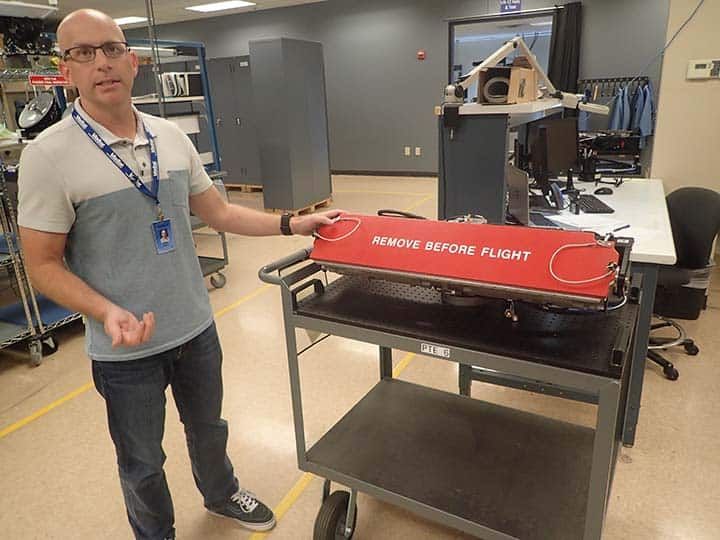 A Viasat worker with one of our steerable antennas for aircraft.

“That service is something not currently available anywhere else in the world,” Leka said.

The varied and compelling nature of all Duluth’s projects keeps work endlessly fascinating, said Business Area Manager Kristin Walsh. And so does the opportunity to stay with a particular project.

“You get to see the whole design life cycle, from concept all the way through to getting it working in a customer’s hands,” she said. “We also immediately give (staff here) full responsibility to whatever you’ve been assigned, so people have long leashes to learn and do real work.”

“We’re pretty self-contained here and that leaves room for agility,” he said. “If you are a mechanical engineer, you could work in the airborne market, the space market, the antenna systems market, with top-secret clearance work or very commercial work as well. We have huge diversity in opportunities.”