Rob Teasdale, Government Systems lead in Australia, aims to be a partner, not just a provider 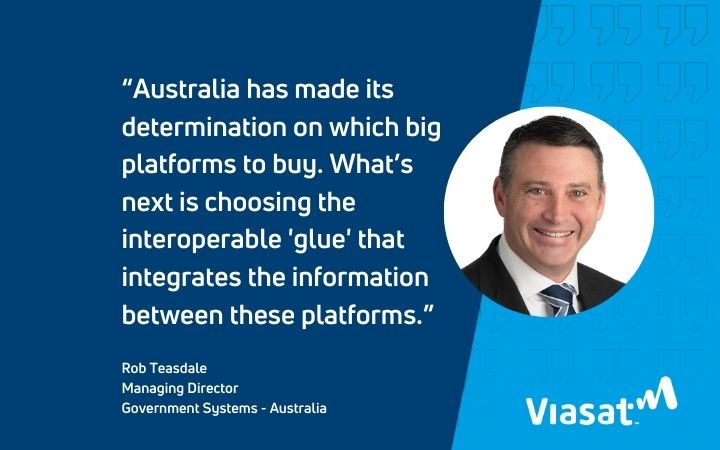 Australia is in the midst of an ambitious defense modernization that encompasses a variety of sophisticated systems, from nuclear submarines and frigates to stealth fighters, missiles, and a comprehensive upgrade of strategic and tactical communications ecosystems. The procurement of these new, modernized defense platforms will take place over the next two decades, but the government will soon face a bigger challenge: connecting them all.

Which makes Rob Teasdale the right man, in the right place, at the right time.

Teasdale started with Viasat last spring as the new managing director for the Government Systems division at Viasat Australia. He brings a variety of experiences to a job that requires the flexibility to meet the evolving connectivity and SATCOM needs of the Australian Defence Force (ADF).

His 27-year career in the Royal Australian Navy began as a communications technician, where he worked on Australia’s first military UHF SATCOM system. This spurred him to earn a university degree in computer systems engineering, which led to assignments as a Navy weapons engineering officer, and later positions in business development for several major defense firms operating in Australia.

Teasdale also traveled to the UK to earn a Master of Science degree in explosive ordnance engineering, which turned out to be good training for paying close attention to safety and detail. “These are systems that need to work every time when they’re supposed to work — and not work when you don’t want them to,” Teasdale says.

Teasdale on deployment during his days with the Royal Australian Navy

The Indo-Pacific security environment currently facing Australia is changing fast. The vast expanse of Australia’s landmass and littoral waters makes SATCOM vital for coordinating far-flung units and installations, especially when Australian forces may be conducting operations in remote and underdeveloped regions of the world.

Adding to the need for bandwidth is the shifting power balance in the Indo-Pacific as China boosts its military. Australia is responding by upgrading and modernizing its military capabilities. For example, the recent AUKUS security pact between Australia, the U.S., and the U.K. will see Australia eventually joining the handful of nations that operate nuclear-powered attack submarines. Meanwhile, the Royal Australian Air Force is receiving 72 F-35A stealth fighters to replace aging F/A-18A/B fighters, while other new systems include the Long Range Anti-Ship Missile (LRASM), new armored vehicles, and even combat drones that will act as autonomous wingmen to manned aircraft.

All of these systems depend on reliable and secure communications to maintain command and control, exchange targeting data, and enable a rapid and accurate connection between sensors and shooters. That means not just having satellite communications, but an integrated SATCOM, multi-network approach with sufficient capacity, connectivity, flexibility, and security.

“Australia has made its determination on which big platforms to buy,” Teasdale says. “What’s next is choosing the interoperable ‘glue’ that integrates the information between these platforms.”

Positioning as a connectivity partner

These goals raise numerous questions: What kind of SATCOM and multi-domain networking best meets the ADF’s needs? Should these be sovereign capabilities, or should they be in partnership with coalition and commercial partners?

For Teasdale, these options are not mutually exclusive.

“Australia has always relied on other nations, particularly the U.S., to provide big chunks of capability,” he says. “The balance between needing to rely on our major security partner, versus exclusive control of Australian assets, will always be a challenge for Australian strategic thinkers. But as one of our leading policy-makers said recently, sovereign capability doesn’t mean only developed here; it’s about sovereign access.”

Another factor is the vast difference in size between the Australian and U.S. defense-industrial sectors. The U.S. aerospace and defense sector has more than 2 million workers; for Australia, that figure is estimated at 130,000 — smaller than the U.S. Marine Corps alone, as Teasdale notes. In turn, the smaller size of the Australian military and defense industry means smaller acquisitions and economies of scale. It also makes it critical for companies like Viasat to establish close relationships with the ADF.

Teasdale sees similarities between the U.S. and Australia beyond the strategic and foreign policy realms. Both nations are deeply committed to multi-domain warfare and acquiring the C4ISR capabilities to sustain it. This means both nations can benefit from similar policies and practices.

For example, Teasdale believes that Viasat’s Hybrid Adaptive Network (HAN) concept – a capability currently used by part of the U.S. Government and being widely explored now to support complex DoD networking requirements – may be useful for Australia. HAN is a public-private model in which users seamlessly switch between government and commercial networks, depending on which one offers the best capacity and performance at a given moment. It’s comparable to a cellphone system, where calls are automatically routed to the best network.

Such a capability could serve as the connective tissue between multi-domain operations.

“Viasat has been successful because it is the glue,” Teasdale says. “If you are in that position, you help the customer by delivering a capability. If all you’re offering is a product, then the customer can get the product from anybody. But they can only get the capability from somebody that they trust.”

Teasdale sees his mission as more than explaining SATCOM. He also wants to acquaint the Australian government with the full range of capabilities provided by Viasat, which has more than 30 years’ experience operating in Australia. That includes providing products like tactical data links radios, UHF radios, and other military communications equipment. With offices in Melbourne, Sydney, and Canberra, Viasat’s work covers the engineering, development, integration, and sustainment of advanced technology and communications systems, products, and services for commercial and defense organizations in the Indo-Pacific region — including providing in-flight internet service to airline Qantas.

“The technical pedigree of our products and the capabilities that we leverage are not in question,” says Teasdale. “It’s more about Viasat being part of those conversations where the government will share very openly what it is that they are trying to achieve, so we participate in that collaboration. My job is to build us to the point that we're invited into those conversations. That means demonstrating the technical expertise and credibility of Viasat, and its willingness to invest in Australia.”

Teasdale will soon have even more capabilities to demonstrate to the ADF. The planned ViaSat-3 satellite constellation is designed to cover the Indo-Pacific region, including Australia, with a vast amount of additional capacity. In addition, Viasat has experience with new systems selected by the ADF (Lockheed Martin chose Viasat to provide the datalinks for the LRASM).

For Teasdale, who began his naval career in communications that included Viasat equipment, confronting the challenges ahead represents a chance to return to his roots.

“My desire was to be an engineer, and the success and the career that I've had since was driven mostly by that engineering degree that I successfully completed around SATCOM,” he says. “It feels quite good to come back to Viasat.”