Viasat employees at Carlsbad, CA campus share their experience at a high-tech company with local students 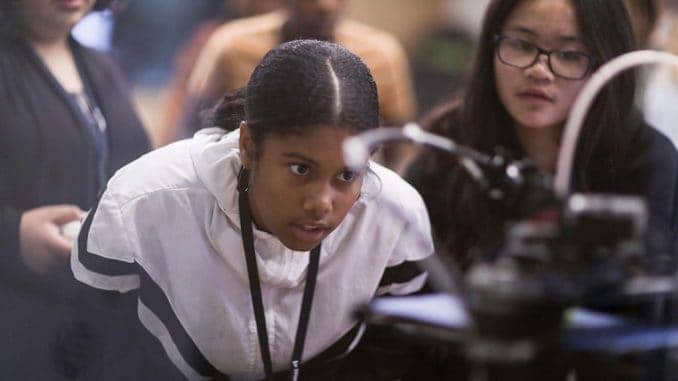 Most of the young visitors were Black or Latino, groups typically under-represented in technology fields. The 25 middle-school students, who came as part of the North County African-American Women’s Association (NCAAWA), were also female — another demographic still under-represented in STEAM fields. STEAM refers to education in science, technology, engineering, the arts and mathematics.

Viasat believes diverse perspectives lead to new ideas and innovative problem solving, is working to change those statistics at its campuses around the world.

Bit by bit, visits like the two held last month are making a difference, believes Viasat’s Ericka Parker. In fact, she witnessed the impact.

“I saw brightness, hope and encouragement in their eyes,” said Parker, a talent acquisition specialist and member of Viasat’s Black Professional and Women In Technology alliances who worked with NCAAWA on the tour. “Seeing that was so worth all the effort we put into this.”

While the emphasis was on computer science, Parker said she and her co-workers described to the students the wide variety of jobs at Viasat – from software engineering and network operations to marketing and human resources.

“At that age, if you’re not a student who loves math or science, you’re thinking, ‘There’s not anything here for me’,” she said. “And that’s not true. We wanted them to know there were other opportunities. For instance, I’m in People and Culture (HR), but I consider myself a woman in technology because I’ve always worked for technology companies.

“It was when we talked about all the possibilities that I felt they could actually see themselves being successful.”

The middle schoolers and their adult mentors, used code to create a binary bracelet marked with each girl’s initials. Viasat Engineering Director Margaret Crist also talked to the students about her path to success.

Another stop on the tour was to Viasat’s Innovation and Commercial Aviation labs. 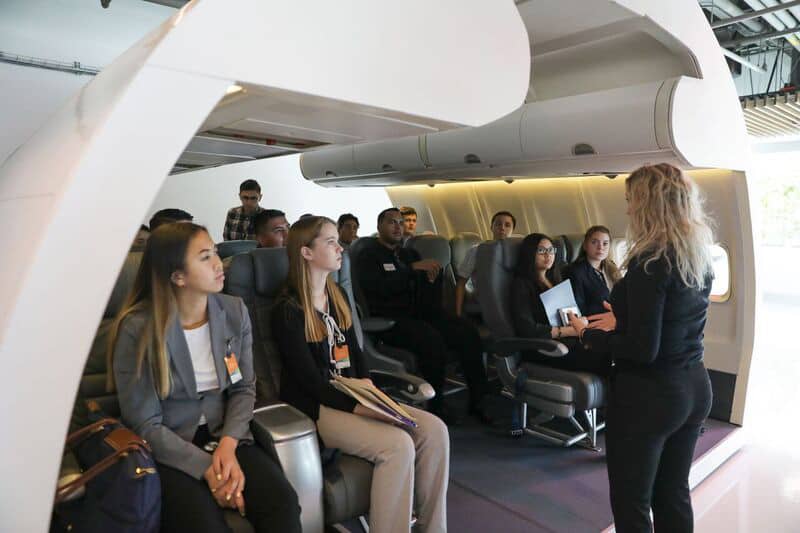 San Diego-area students took a seat in the Viasat aviation lab at the company's Carlsbad campus while hearing about careers in technology from employees.

For Viasat systems test engineer Leonard Lopez, organizing a visit for college students was a way to offer others the same career boost he was given. Fifteen students – all enrolled in MESA (Mathematics, Engineering and Science Achievement) programs at their schools – shadowed Viasat employees and toured campus on Nov. 15.

“When I was in school, I was part of the MESA program and participated in a shadow day event,” said Lopez, a member of Viasat’s Hispanic/Latino Alliance (HOLA). “It was very eye-opening to get to see the type of work that would be expected, and definitely motivational. It was another way to bridge the gap between ‘here’s what I’m studying,’ and ‘here’s what it looks like and what I can look forward to after.’”

Based on his experience, Lopez advocated bringing MESA students to Viasat.

The 15 students from San Diego State University, Southwestern College, San Diego City College and Helix High School learned about internships, toured the Innovation and Commercial Aviation labs and security operations center, and heard from other Viasat employees about how they built their careers.

They also got to point an antenna and connect live to the ViaSat-1 satellite.

MESA helps educationally disadvantaged students become engineers, scientists and other math-based professionals. Most MESA students are the first in their families to attend college.

“I’m a first-generation college student, and there were a lot of challenges along the way for me,” Lopez said. “So I want to do whatever I can do to help others in a similar place. It just feels like the natural progression. I can say I’ve been in the exact same place where they’ve been.”

A 2017 report shows Blacks, Latinos and Native Americans are underrepresented in tech by 16-to-18 percentage points compared to their presence in the U.S. labor force overall. Blacks and Latinos each make up just 5.3 percent of the professionals category in U.S. tech industry labor data.

Events like the tours Parker and Lopez helped lead are among Viasat’s efforts to even the scales for under-represented STEAM talent and provide access to real world examples of STEAM careers, in part by also supporting groups like MESA and NCAAWA devoted to that same goal.