Viasat is a major sponsor of the Festival of Science & Engineering, designed to engage kids and families in science and engineering. The March 3 event at Petco Park drew more than 20,000 kids and their families. Viasat also sponsored the March 10 Super STEM Saturday, held at California State University San Marcos. It drew more than 10,000 attendees. 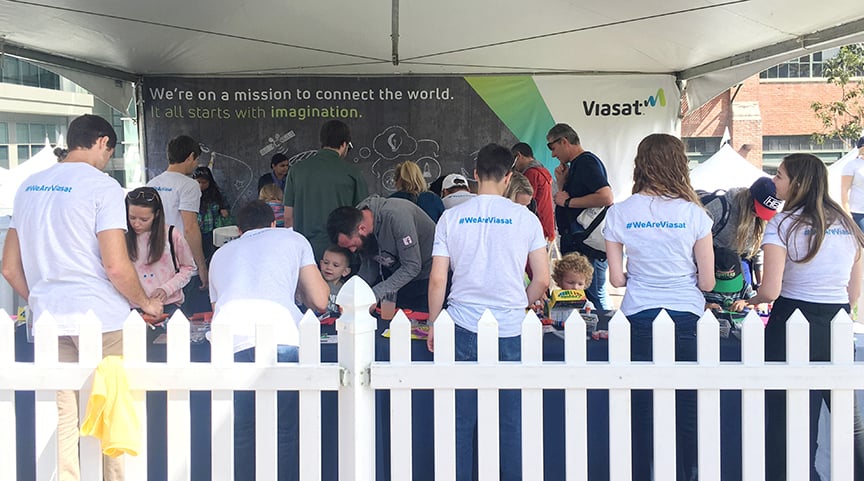 Viasat-Carlsbad software engineer Phillip Hwang loves watching children and adults grasp new concepts. He hopes those moments are the springboard to new ways of thinking, and for the children, the first steps on a technology-related career path.

“We get to plant the seed in their mind,” said Hwang, who volunteered at two recent technology festivals in the San Diego area. “They get to go back to school or home, and the learning continues from there. Without that seed, they’ll never know these fun aspects of technology exist.”

“It’s always interesting to see when a kid gets it and they light up,” she said. “They realize they made something they can and apply, and that’s pretty cool. I think it takes a number of touch points like that along the way to expose kids to new ideas and keep them interested in STEM and STEAM.”

The San Diego Biocom Institute Festival of Science and Engineering and Super STEM Saturday were both held in March.

Viasat is a major sponsor of the Festival of Science & Engineering, designed to engage kids and families in science and engineering. The March 3 event at Petco Park drew more than 20,000 kids and their families.

More than 40 Viasat employees and their friends and families volunteered at the two events. Volunteers helped show students how to build their own game controller using construction paper, aluminum foil, glue, tape and wires.

They then connected it to a Makey Makey, an electronic invention tool that allows users to link everyday objects to computer programs. Students could then use the controller they created to play a Minecraft-inspired racing game. They also had the option of using MIT's Scratch drag-and-drop programming language to code their own version of the game.

The gaming activity was a hit, Wilson said.

“We had a steady stream of students, from age 2 all the way up to teenagers,” she said. “We even had some parents who made a game controller so they could race against their kids.

“I think it was empowering for the kids to realize, ‘I can control what the computer is doing through something I made.’ I hope it sparked their interest in what they’re capable of regarding technology.”

Wilson likes sharing her enthusiasm for Viasat with children and their parents.

“When you’re a recruiter, you really have to believe in what you’re recruiting for,” she said. “I really believe in the work Viasat is doing, and in the people who work here. We are solving challenges that others haven’t.”