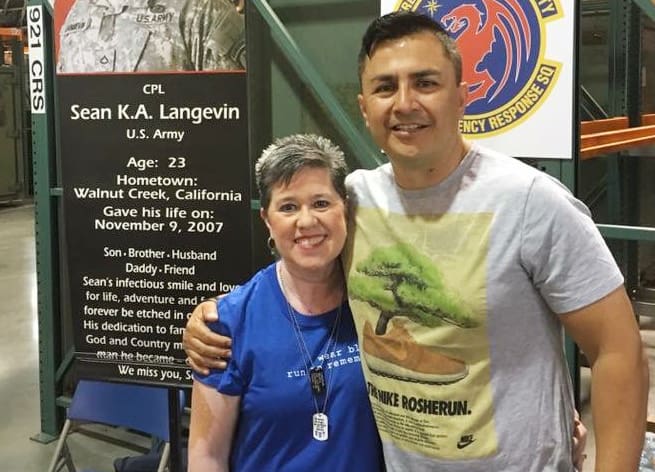 For the last seven years, Viasat Area Sales Manager Jesse Garcia has worn a black bracelet that bears the name of an enlisted man who died in 2007. Garcia, who served almost a decade in the Air Force, never knew Army Cpl. Sean Langevin. But the bracelet is a way for him to honor all those lost while serving their country.

So is running in the annual Travis Air Force Base’s Gold Star Ruck. The 10K supports California Gold Star members – those who lost an immediate family member serving in in a time of conflict. Each runner carries 30 pounds of gear on their backs to symbolize those who died. This year’s ruck was held on May 18.

Garcia isn’t a regular runner, but he’s run the ruck for eight of its nine-year existence, this year finishing in sixth place. 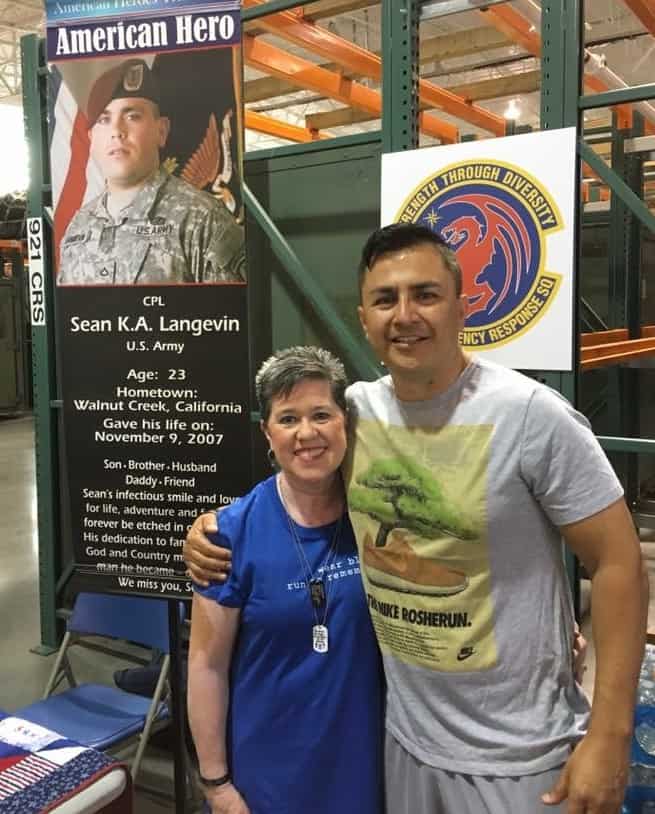 This version of the photo shows Roxane with a poster of her son, Army Cpl. Sean Langevin, who was killed in action in 2007.

“I do it because I’m a veteran and on a personal note, because I lost a lot of friends who were killed in action,” he said.

The Air Force veteran said he wanted to give something to the families who’d lost so much.

“I try to do as much as I can to help out the military people, and from day one, my experience with these Gold Star families has been awesome,” Garcia said. “This wasn’t a sales opportunity, but it was pretty neat. I gave away about 175 bags, and everybody loved them.”

In addition to the run, family members set up tables during the ruck, each with a display honoring their lost loved one. While visiting those tables seven years ago, Garcia met Sean Langevin’s mother Roxane, who gave him the bracelet. Garcia wore it round the clock until late April, when he lost it while vacationing in Hawaii. During the 2019 ruck, Roxane Langevin gave him a new bracelet that Garcia is again wearing with pride.

“These guys made the ultimate sacrifice, and their family’s fear is that their child will be forgotten and nobody will remember them,” Garcia said. “That’s why I wear it.”

In that spirit, he hopes to again provide Viasat-sponsored gifts to runners and families at the 2020 run.

“I will definitely push to do the bags again next year,” he said. “Those Gold Star family members are very near and dear to my heart.”