Viasat's evolution into a space company 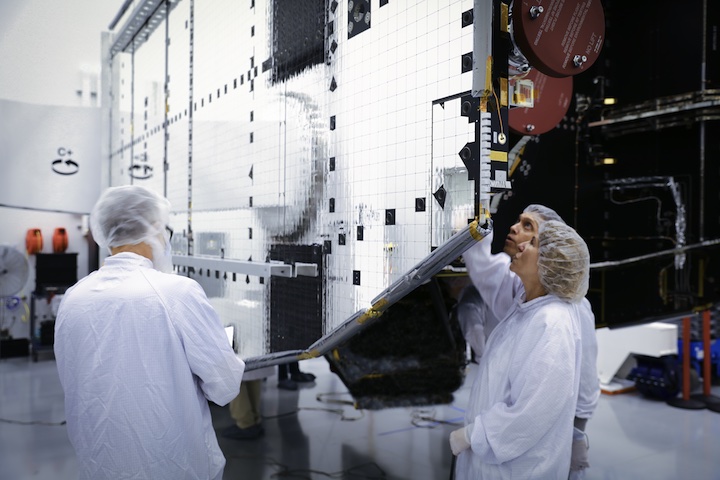 Workers at Viasat's Tempe, AZ facility put some finishing touches on the company's largest space project to date: ViaSat-3, a three-satellite constellation expected to cover most of the globe with 1 Terabit per second capacity on each satellite.

Viasat has come a long way from its beginning as a three-person defense contractor in 1986 to a public company that today builds satellites with the power to serve the planet.

Viasat’s decision to design and build its own satellites came in response to consumers’ never-ending demand for affordable bandwidth. “And we didn’t see anyone else aiming to do it,” co-founder and CEO Mark Dankberg told the San Diego Tribune in 2009.

“We feel bandwidth is really a fundamental and enduring value proposition,” he said at the time. “That is what gave us confidence to get into it.”

Viasat’s space business has since come in-house and grown increasingly sophisticated. A key part of that evolution was Viasat’s 2002 acquisition of U.S. Monolithics (USM), a designer of high-frequency broadband circuitry in Gilbert, AZ and the root of Viasat’s Tempe, AZ campus.

At the time, USM was contracted to build transceivers for WildBlue, a Denver-based start-up satellite internet provider. Viasat, meanwhile, was under contract to build modems for WildBlue. Viasat bought USM to provide a more integrated process to WildBlue, and later acquired WildBlue itself.

“When Viasat bought us, we had no plans for building a satellite payload,” said Dean Cook, one of USM’s co-founders and now chief engineer at Viasat’s Tempe office. “We had people with experience building parts of the Iridium satellites and payloads, but we only had some of the areas of expertise needed to build a payload. At that time, we were focused on increasing the producibility and reducing the cost of the user transceiver for WildBlue.

“It is amazing that we were able to grow from producing commercial ODUs (outdoor units) to building payloads for large, geostationary satellites,” he said.

A turning point in Viasat’s vision began in 2011, when the company signed a contract to provide RF modules for the Iridium NEXT satellite constellation. The new satellites were intended to replace the original global constellation, which went into service in 1998.

“Half the company had worked on the original Iridium satellite project,” Buer said. “So we had some built-in incumbency, along with some credibility, that allowed us to win that contract.”

Iridium NEXT is a global constellation of 81 low-Earth orbit (LEO) satellites for cellular phone and paging services. Each satellite is crosslinked to as many as four others, and the modules required were more complex than anything USM/Viasat had previously done.

“We had to grow from doing small modules at low quantities to doing a much more complex, full-production run for a whole LEO constellation,” said Nathan Welborne, a Viasat business development specialist who acted as lead mechanical engineer for the project. “I was right in the trenches as we were figuring out how to build all the capabilities we needed for these high-reliability space modules. It was tons of work.”

That work included testing each module to ensure it could handle the rocket launch environment, which includes vibration, shock, and vacuum.

“We did designs for these environments — and even worse ones before — for defense programs, but Iridium was a large enough project that it made sense for us to build up our in-house design, test, and lab capability,” Buer said.

The project paid off for both Iridium and Viasat, which drew upon that knowledge to build its own satellites.

“While we were still in the design phase on our own internal payloads, we had government projects on smaller payloads,” Buer said. “That helped blaze the trail for some of our infrastructure.”

Pushing through the doubts

The decision to build payloads in-house was driven by many factors, among them the desire to protect Viasat’s intellectual property (IP).

“There was a lot of pressure pushing us that way, but it was really Mark Dankberg’s vision,” Buer said. “He felt we needed more control of the process.”

This was no time for caution.

“Mark had this way of getting us to go beyond what we thought we could do,” Buer said. “We were already building pieces (of a payload) and he asked, ‘Why couldn’t we do this?’”

Viasat’s leaders saw other advantages to the company building its own payloads — part of an increasing move toward vertical integration.

“Even more than the IP side, there are gains we can get in productivity by eliminating some walls between suppliers and vendors,” Buer said. “And when we’re designing the ground system, it also helps because we have a really good overview of the impacts the spacecraft have on the SANS (satellite access nodes on the ground).”

To build a payload, Viasat also needed a space in which to do it. In 2014, the company broke ground on a 110,000-square-foot facility in Tempe that included a high bay and cleanroom labs. It also needed more staff.

“When I started at USM, I was employee 9; now we have 550 to 600 employees spread across three different sites in Arizona,” Buer said. “A huge chunk of that is support for ViaSat-3.”

And while Iridium NEXT helped prepare Viasat for building its own payload, there was still much to learn.

“In addition to our day jobs, we had to also help specify and plan the facilities needed to build the ViaSat-3 payloads,” said Thom Messenger, mechanical engineering manager at Viasat’s Arizona offices. “Most of us came from companies where all this was already in place. The high bay, vibration and shock lab, and thermal vacuum lab were a few of the many areas that had to be planned and built.

“Even movement of the flight hardware in the facility presented challenges: Is there enough room to move two payloads as required in the high bay?” he said. “Are the hallways and doors large enough to move subassemblies from a lab to the high bay? Can the Boeing payload transporter navigate around the Viasat Tempe building parking lot?”

In fact, the answer to that final question was no. Viasat had to realign one of the sidewalk curves to accommodate the transporter.

/content/dam/us-site/blogs/images/ViaSat-3_Boeing.jpg.transform/medium/img.jpeg
/content/dam/us-site/blogs/images/ViaSat-3_Boeing.jpg
Safely delivered: The first ViaSat-3 payload arrived at Boeing Satellite Systems in June. It is now being integrated with the satellite 'bus' and undergoing months of rigorous testing to prepare it for launch and the harsh environs of space.

When Viasat delivered the first ViaSat-3 payload to Boeing in early June, Buer and Welborne said they both felt relieved. The team had pushed on under tremendous pressure and through multiple challenges, including delays tied to the pandemic.

“It’s a huge accomplishment,” Buer said. “At the same time, we’re still supporting Boeing going through their payload integration, and we still have two more (ViaSat-3) payloads to go. He added: “One of the things engineers do badly is celebrate our accomplishments. We are always looking at the next challenge.”

But the team took at least one pause to appreciate what they had achieved. Right before the payload shipped, members of the ViaSat-3 team participated in an all-hands meeting featuring photos of the completed payload. It drove home all that they had accomplished.

“Looking back, it is amazing how far we have come – from a plywood mockup of a single radiator panel with 3D-printed units in 2016 to a completed flight payload in 2021,” Messenger said. “It was a daunting task to fulfill Mark Dankberg’s vision of designing and building the highest capacity satellites. But with the constant support of Viasat leadership — and the entire team’s ability and talent to break down the overall task into smaller subtasks and execute on them — we did it.”