New handheld radio technology from Viasat enables much better communication between troops on the ground and support aircraft above. For close air support, the new technology is tough to beat, and troops are eager to use it. 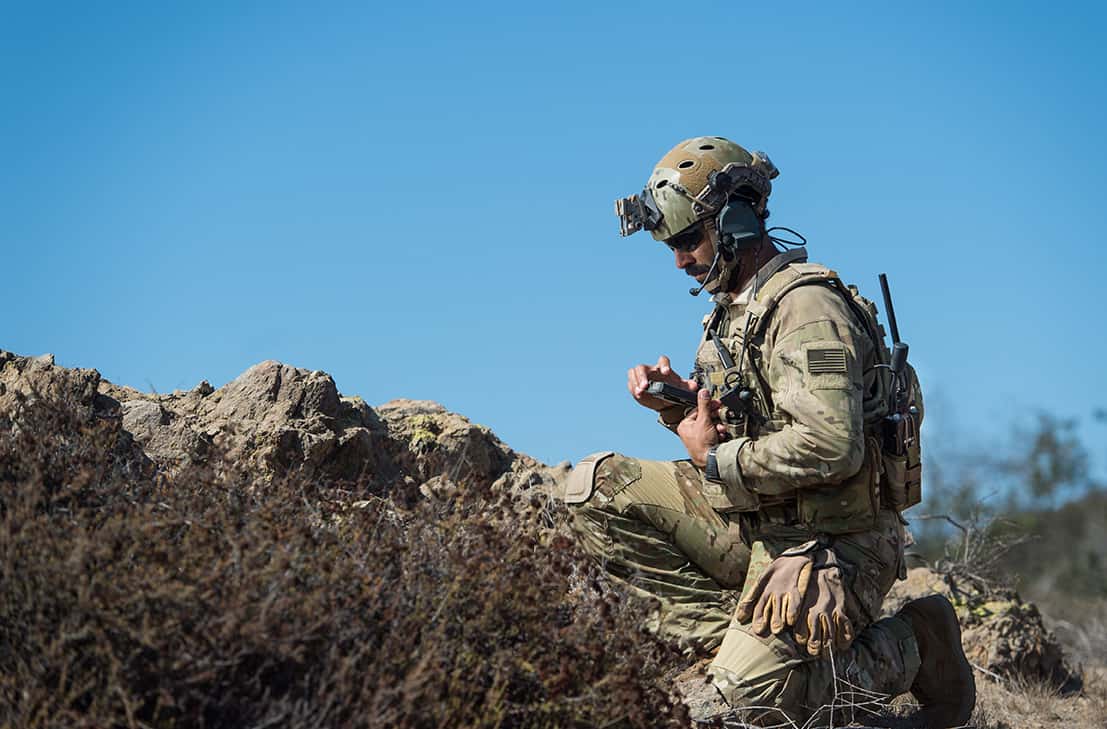 Close air support, or “CAS,” refers to air action that assists friendly forces on the ground. It may sound hard to believe, but the technology behind CAS hasn’t changed that much since World War II, when ground forces used smoke to show pilots their location.

The story of CAS revolves around two key players: the warfighter on the ground and the pilot flying a mission. The warfighter on the ground, often known as the Joint Terminal Attack Controller (JTAC), is charged with directing the pilot to a specified mission target. Ed Priest, a member of the Viasat team, served as a JTAC in the U.S. Air Force for 25 years. He now works on supplying JTACs and pilots a better communications tool to coordinate mission strikes.

Priest described what CAS looks like in many scenarios:

“You’re running around in circles, the enemy shooting at you, trying to talk to a plane 30,000 feet up,” Priest said. “You’ve got a notebook in your pocket and a GPS, and you’re trying to correlate things on a paper map and compare it to landmarks on the ground that may all look very similar.”

In the air, the pilot jots down the coordinates on paper using a knee board while flying the plane, then inputs them into his flight computer. Priest noted when he was part of an elite USAF unit, it could take up to 45 minutes between first contact with the plane and the strike.

Viasat’s new technology, called “BATS-D”—or the Battlefield Awareness Targeting System – Dismounted, is now being put into the hands of Special Operations Forces. In initial test cases, it got the targeting timeline down to 30 seconds — a reduction of nearly 95 percent.

Priest continued, “Every single JTAC we surveyed who’s used the BATS-D system say they don’t just want the BATS-D radio, they don’t want to go into combat without it.”

As someone who knows what it’s like to be in harm’s way without the right technology, Ed Priest says he’s happy to be part of the Viasat team improving CAS.

“Putting technology in warfighters’ hands at this pace ensures more precise positioning, location accuracy and reliable communications. It’s a great feeling to know we’re empowering our warfighters with technology that can save lives through more coordinated mission efforts.”

It was multi-tasking amplified, under extreme pressure and uncertainty. “As a pilot, you were typically flying at night, unsure of a JTAC’s exact location, listening to a garbled voice radio communication and you’re writing down their coordinates on a knee board and manually entering those into the mission computer — often times with the JTAC in the middle of a firefight,” said Kessler.

This level of uncertainty led to air crews being unable to support missions in order to avoid the risk of fratricide.

“Depending upon the rules of engagement, we used to say: If there was any doubt, then there was no doubt — don’t drop,” Kessler said. “Former pilots, JTACs, other veterans and a team of engineers came together at Viasat to find a better way when we developed the AN/PRC-161. With Viasat’s BATS-D, now JTACs can designate multiple targets and confirm their location through a digitally automated process that’s directly entered into a pilot’s mission computer, heads up display, and helmet-mounted cueing system.”

All of that, Kessler said, has real-world benefits.

“The result is a significantly increased likelihood of mission success coupled with a dramatic reduction in potential fratricide,” he said. “This outcome has been outstanding for our customers and speaks volumes to the passion and culture of innovation at Viasat.”

BATS-D is the first and only handheld Link 16 radio. It was developed using Viasat’s signature Non-Developmental Item (NDI) offering model, which puts cutting-edge technology capabilities and solutions into the hands of warfighters ahead of the traditional government procurement model.

In just 17 months, Viasat took the concept of a handheld Link 16 radio sketched on the back of a napkin to delivering a number of BATS-D units to Special Forces JTAC’s to undergo operational assessment. Shortly thereafter, the BATS-D radio successfully completed the assessment and entered production with the official nomenclature, “AN/PRC-161.”

“The AN/PRC-161 BATS-D product was launched as a private-sector initiative to solve SOCOM’s urgent need for a small, secure device that could enable seamless Link 16 air-ground communications. By using next-generation, patented technologies and an agile development process, we created a game-changing capability that some deemed impossible – and we did it much faster than using standard government procurement practices.”

“The most recent win is with the AN/PRC-161, also known as the handheld Link16 radio,” said Woods. “This radio provides capability to the smallest tactical element. It supports digitally aided, close-air support communications, which significantly reduces time to complete a call for fires.”

Learn more about the Viasat AN/PRC-161