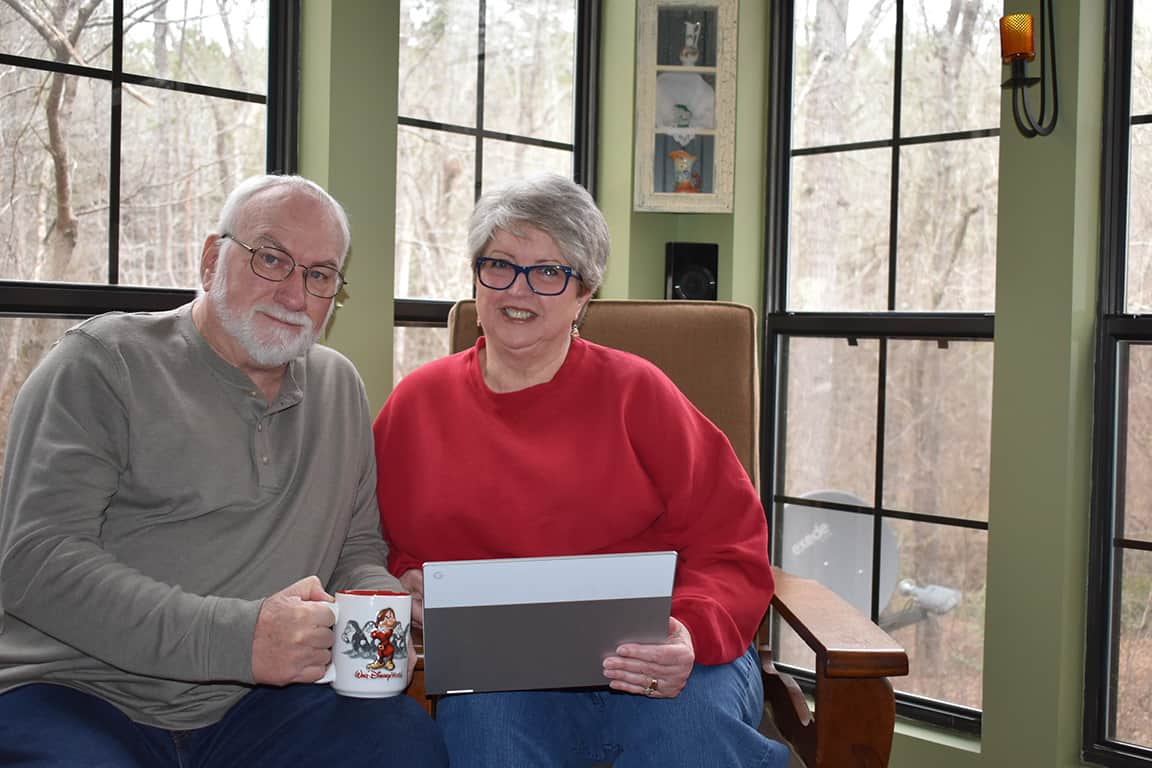 “We are just thrilled to have the unlimited, but I still have a hard time trying not to worry about using data,” Rose said. “Before, the grandkids would hit our door and they knew they had to turn their Wi-Fi off. If we had a lot of downloads, we’d have to go to the local library. Sometimes we’d sit in our kids’ driveways while they were at work and steal their Wi-Fi.

“We don’t have to nurse it along anymore and that has just been sort of a weight lifted off of us.”

“We were able to do it for the same price were paying for the 50 GB plan. It’s just freedom; we are now much, much freer to do what we want to do.” —Rose Smith

The Smiths are both retired and live about 20 miles from the nearest town. They built their home near Spartanburg 40 years ago – when what would someday be the internet was a limited-access network called ARPANET. The Smiths had a horse, a 10-year-old son and several pets. Rose and Earl both grew up in the country and wanted the same experience for their children.

Today, with their children grown and their golden years under way, they rely on the internet for entertainment, shopping and social connection. But until recently, they steered clear of streaming sites like YouTube and wrote checks to avoid using data for online banking.

Then the longtime Exede/Viasat customers switched from their old Exede Liberty plan to one of Viasat’s new unlimited plans.

“We were able to do it for the same price were paying for the 50 GB plan,” Rose said. “It’s just freedom; we are now much, much freer to do what we want to do.”

Viasat introduced the plans in select areas last fall, and is adding new areas around the country with the help of its recently launched ViaSat-2 satellite.

The Smith’s Silver plan streams video at 480p, a step below high definition, which helps ensure they have continual unlimited data.

“We’ve been able to watch our favorite show on Netflix; the video quality was just fine,” Rose said.

The couple also enjoys competing against one another in video games.

“Yesterday, we downloaded a 50 GB game,” Rose said. “Not long ago, that would have used a whole month’s worth of data.”

On the more serious side, the Smiths also have a Blue Cross insurance app that lets them video-chat with a doctor. Though they’ve never needed to use the feature, Rose likes the security of knowing she now can.

“That’s a use for our unlimited data that’s potentially life-saving,” she said. “I’m sure that could be useful to a lot of rural customers who can’t get to a doctor quickly.”

A self-proclaimed technophile, Rose has a part-time job testing tech products for a company. She can do a more thorough analysis with unlimited data.

“I love coming up with new ways to spend my data,” she said. “We used to dream about unlimited. It’s amazing how far satellite internet has come.”