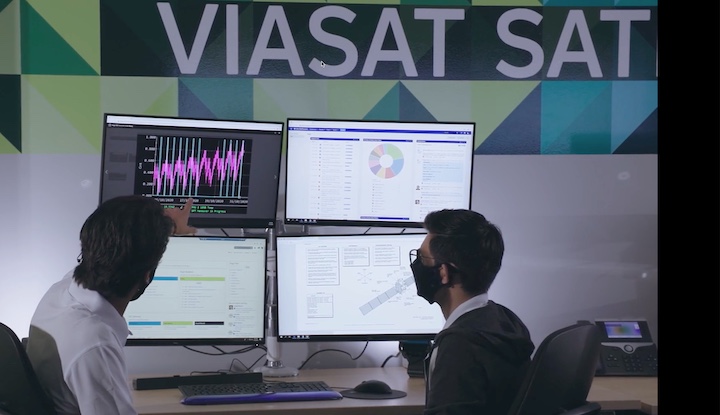 Employees at Viasat’s UK office often use words like “fun,” “diverse,” “exciting” and “challenging” to describe their everyday work experiences. And in an atmosphere like that, Operations Director Jess Everill says, time flies.

“We’re a small organization in the UK right now. We have to wear many hats, which is brilliant because it means every day is a new day,” she said. “I like the challenge of having the opportunities to experience different roles.

“I’ve been here 13 years and it doesn’t feel like it’s been that long. There’s always something different going on in the business.”

About 70 people work in the office located in Aldershot, about 90 minutes from London. Half of the team develops software and hardware for Viasat’s government encryption devices, supporting several NATO nations and enterprises.

The other half work on space and tactical communications projects to support the Ministry of Defence’s digital and multi-domain integration vision – the interconnection of all branches of the military, government and cyberspace – as well as Europe’s growing space industry. They’re also preparing for expanded internet service from the company’s upcoming ViaSat-3 global constellation.

And while their small size brings them close, their work — with its heavy focus on the country’s defense industry and government programs — binds the team further with a sense of shared mission.

“Ultimately what we do is help look after and support the defense and security service personnel that keep us and our culture safe,” said Viasat UK Managing Director Steve Beeching. “Our service men and women are putting their best foot forward, and the Viasat solutions and services we do are critical in supporting them – and ultimately us. That’s a really rewarding place to be.”

“They’re putting their best foot forward and the things we do are critical in supporting that; that’s a really rewarding place to be.”

The UK office has built its reputation steadily over the years. Founded as Stonewood  Group in 1995 – a company specializing in encryption products and services – Viasat acquired it in 2010.

Today, as the UK’s Ministry of Defence (MoD) works to modernize its technology, it’s implemented many of the industry-leading Viasat products used by U.S. forces.

With ViaSat-3, the partnership between Viasat UK and the MoD is anticipated to grow even stronger.

Like most of Viasat’s overseas sites, the Aldershot office is expanding.

Here are just a couple of recent examples of its growing business and influence:

The UK facility is also linked to Viasat’s primary CSOC at the company’s Carlsbad, CA headquarters.

When they’re fully up and running, a minimum additional 75 employees – all highly trained in network, analysis and cybersecurity – are expected to join the existing team to help run the UK centers. They’ll also support the launch and service rollout of the second ViaSat-3 satellite, which will cover Europe, Middle East and Africa.

The concept and technology involved in the project is so groundbreaking, Viasat UK regularly hears from other members of the military and NATO forces asking if Viasat can create something similar for them.

ViaSat-3’s role in the UK

In a country that recently broke from the European Union and aims to control its own future, UK-based innovation is invaluable. ViaSat-3 aligns well with those ideals.

That calls for creating jobs and transforming the UK economy into a fairer, more balanced one that spreads prosperity throughout the country – including bolstering the defense industry’s contributions to that economic growth.

ViaSat-3 also opens the door for Viasat UK to bid on a defense contract providing support for Skynet, a constellation of seven satellites that provide strategic and tactical communications to the MoD’s military, government agencies and allies.

“All government defense departments must be worried about cybersecurity,” he said. “I think there’s an awful lot of opportunity to expand in that direction, not just in the UK but globally.”

Beeching and Stuart both say it’s Viasat UK’s unique approach to innovation that keeps it on a winning track. Stuart, who joined the company in 2020, was initially amazed by that way of thinking, calling it “a bit like throwing a cat among pigeons, something no one I knew had done before.”

Beeching describes it another way.

“I like this culture of diverse innovation,” he said. “We focus on the outcomes, not the process, and that way deliver operational results to improve missions.”

“Our entire focus is supporting our customers, and doing that in a really open, dynamic, trusted manner. We’re saying you don’t need a 10,000-page specification to build an iPhone. Tell us the outcome you want and we’ll remove the burden from you.

“It also allows us to take responsibility for delivering an integrated outcome rather than focus on the technology or building a detailed specification, often not written by those with the most up-to-date digital or mission insights, and which ultimately does not deliver that desired outcome. This seamless trusted partner approach to the customer and culture is part of why I enjoy being here.”

“My role was first just admin-based,” said office administrator and facilities coordinator Saima Begum. “But now it’s very diverse. You’re always given a chance to try new things; those doors are always open. The business is constantly evolving, and I’ve been able to evolve, too, and develop as a person.”

Everill, whose career journey started in customer service, echoes those sentiments. She also appreciates the trust and independence the Viasat UK office has within the larger company.

“We get the opportunity and the freedom to make our own way, while knowing the support is there from the larger corporation,” Everill said. “That, and Viasat’s emphasis on professional development, matches my inquisitive nature. I wouldn’t want to work for an organization that says, ‘This is your job, don’t step outside of that box.’ So I really appreciate Viasat’s philosophy that there is always a better way. I don’t like things to stay the same, and neither does Viasat.”