Research shows a positive school environment boosts student attendance and can also contribute to academic success. What’s typically not revealed through data is how it makes students feel.

At a government-run school in India, several Viasat employees witnessed the impact through the eyes of school children returning to a building they’d transformed. The volunteers helped give the faded school exteriors a dramatically colorful makeover.

“You could see the delighted face of each and every child,” said Sankar Suriyanarayanan, a senior technical lead in one of Viasat’s Chennai, India offices. “It was very powerful – seeing the light on their faces. And the parents were also really excited to see how the school had been renovated. It was an amazing experience for all of us who spent time on this project.” 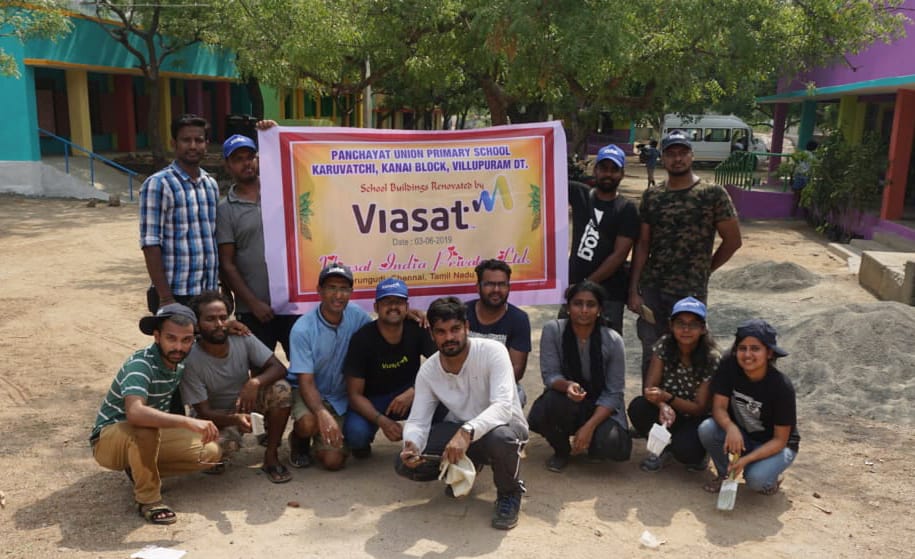 Viasat volunteers gather at the school after the work painting was completed. Some of their colorful handiwork can be seen in the buildings on either side.

India has both private and government-run schools; the government schools operate on public funds and most of the children who attend them come from economically disadvantaged families.

But Suriyanarayanan recently found a rural school in need not far from his hometown in southern India. He learned that most of the parents whose children attend school in Karuvatchi work in a local factory. Because factory wages are typically low, children often leave school to join their parents in the factory to augment the family’s income.

In India, the average factory worker gets paid less than $2 per hour, according to The Economic Times. And 2017 statistics released by UNICEF show 12 percent of all children in India are engaged in some form of child labor.

Education is a critical tool in breaking the poverty cycle common to many of these families.

“We talked with the school and decided to try to make it more attractive so kids are motivated to attend,” said Vinod Sivadas, head of Viasat India’s People & Culture. “Just donating money isn’t the only way we like to help; we also want to participate. The school had some worn-down buildings, painted in the standard government colors. We wanted to make it a little more attractive.”

Suriyanarayanan spearheaded the employee-driven project, which was supported by Viasat. To ensure a professional appearance, Viasat hired painters to whitewash and paint most of the buildings, leaving some work for the Viasat crew.

“Despite it being a Sunday, volunteers assembled as early as 6 a.m. at our office for the 4-hour journey to this village,” Sivadas said. “The team did an amazing job, painting the rear side walls of all five buildings.”

Volunteers also planted saplings on the school grounds. Viasat India is also planning to use the volunteer grant program, to make additional donations toward repairs in the school’s bathrooms.

While most took the 4-hour bus ride back to Chennai that day, a handful stayed overnight to welcome the children to school the next morning. They handed each child a welcome kit with notebooks, rulers, pencils, sharpeners, erasers and crayons.

“The children were really happy, and that made me feel happy, too,” said software engineer Aravinth Natarajan. “Everyone in the village was really supportive of us, too. It was a really good experience.”

Because Suriyanarayanan’s hometown is near Karuvatchi, he plans to visit the school occasionally.

“The feedback so far is quite positive,” he said. “The children are very happy. And the administrator of that location said he feels very fortunate to have Viasat in that village.

“Our hope was to make the school more eye-catching so not just the kids, but even the parents want to go there every day. Now the kids are very excited to come to school. They’re engaging more with their parents. It’s been positive on both sides – for the employees as well as the parents, kids and administration. Just seeing the children’s smiling faces – we knew our weekend there was time well spent.”