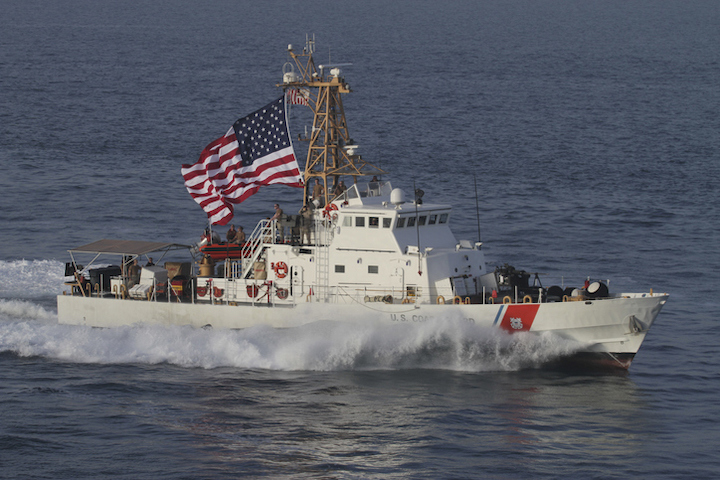 A Coast Guard cutter in the Persian Gulf.

Viasat senior systems engineer Shawn Bailey thought he’d escape the drudgery of college when he enlisted in the military. Instead, he got an unexpectedly intense educational and physical experience – and a 24-year career that led him to his work with Viasat. Bailey spent most of his years in the military with the U.S. Coast Guard.

The Coast Guard celebrates its 231st birthday Aug. 4, an event Bailey has traditionally marked on Viasat’s Carlsbad campus. Pre-pandemic, the company hosted an annual party for the event with cake and beer, a tradition Bailey expects will resume in 2022.

Bailey was 17 when he enlisted, first joining the Navy, and transferring to the Coast Guard at age 29.

While Bailey became a skilled electronics technician, specializing in satellite connectivity, he was then still uncertain about the direction his life would take.

“I would struggle to repair a flashlight before joining the Navy,” he said. “I thought I was getting away with something by not going to college. But in the Navy, you spend eight hours studying electronic theory, then you have to do a security watch from midnight to 4 a.m., and be back in class at 8 a.m.”

That schedule taught him discipline and resilience – and gave him the motivation to further his education. Bailey got two degrees, including a master’s in telecommunications.

In 2001, he was offered a direct commission as an engineer with the U.S. Coast Guard. He spent the next 11 years with the organization, managing IT projects that included providing satellite connectivity to the Coast Guard fleet. That connectivity is now provided by Viasat.

Bailey’s work took him to the Persian Gulf, Puerto Rico, Guam, Alaska and Hawaii, among many other places — opportunities he’s not sure he’d have had with other branches of the military.

“The Coast Guard is only about the size of the New York Police Department, and it does very different missions like environmental protection and saving lives at sea,” he said. “That was one of the draws for me. The other was that in the Coast Guard, you can be a technical officer. I worked in satellite connectivity and cybersecurity. Looking back, I feel very proud to have laid down satellite communications capability for the Coast Guard cutters in the Persian Gulf to allow them to communicate with their Navy counterparts. It had a significant impact on operations over there.”

Bailey also helped upgrade communications to towers along the coast with enhanced life-saving systems. Those allowed a boat in peril to push a button and send vital information to the Coast Guard, including its location, who was on board and even their next of kin.

“It took the ‘search’ out of search and rescue,” Bailey said.

In another instance, a ship with satellite connectivity collided with a buoy and began to sink. Because of its communications systems, the Coast Guard successfully located and saved the ship and its occupants.

Bailey retired from the service in 2012, working for a cybersecurity start-up before joining Viasat in 2017. It’s a role for which his years with the Coast Guard were a perfect setup.

“I felt Viasat was a really good fit because I had a satellite background, in addition to Navy communications, networking and cybersecurity,” he said. “So landing in this advanced networking and cyber solutions group at Viasat has been a great use of those skills; it’s also been fun.”

Bailey said his military service provided not only a great foundation for his civilian career, it helped form him into the person he is today.

“When I enlisted at 17, I was a low-achieving student in trouble with the law,” he said. “After 24 years of service I had traveled the world, obtained my master’s degree in telecommunications and was an adjunct college professor helping others in information technology.

“I have friends from the Navy and Coast Guard all over the country that I still keep in touch with after more than 25 years. I feel lucky to have served, and for the experiences and memories that I have.”