Group plans celebration of Black History Month and other initiatives 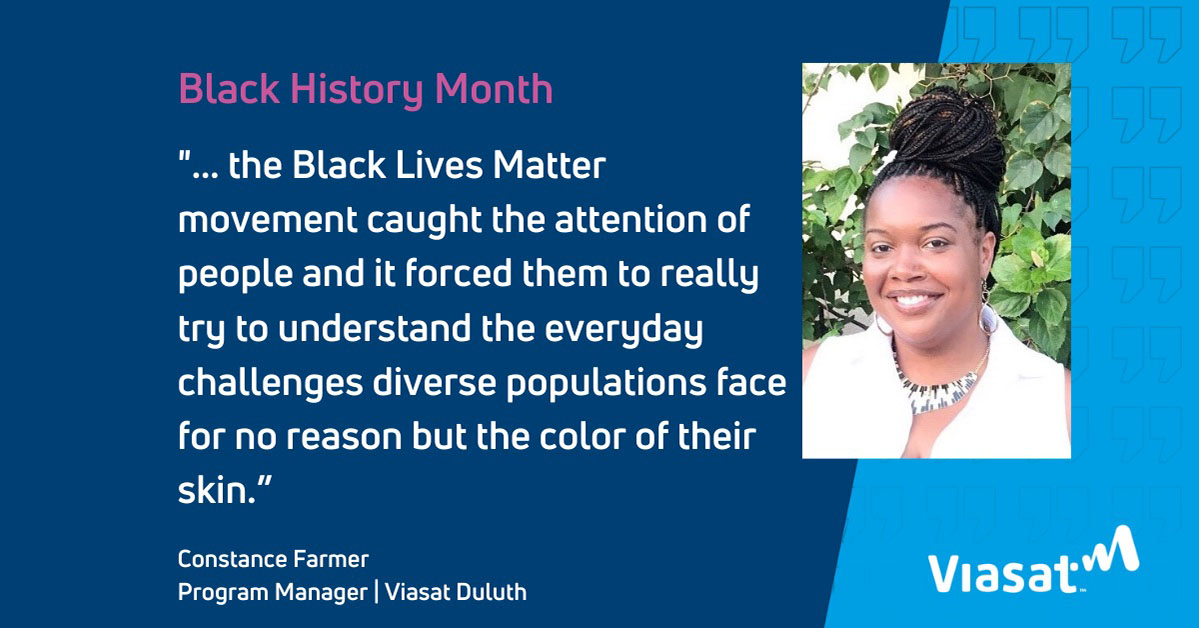 As Viasat’s Constance Farmer watched coverage of the Black Lives Matter protests during the summer of 2020, she felt a growing need to act. That idea was further spurred by the fact that her 11-year-old daughter wants to become an engineer, and Farmer has long felt an obligation to help prepare a place in the world for her.

Bolstered by those two incentives, and with help from Viasat program manager Shawn Gigure, Farmer led the launch of a Black Professional Alliance chapter at the company’s Duluth, GA campus in August 2020. Farmer and Duluth’s Kevin Turner co-chair the group, which is planning its first celebration of Black History Month in February.

“My daughter’s career aspirations and the BLM demonstrations definitely motivated me to do something,” said Farmer, manager of after-market services at Viasat. “I’m still not sure if I was the right person to lead this group, or if this was the right move to make. But I knew that something needed to be done.”

That need has been with Farmer at varying levels throughout her life, often moving her to overcome her inherently introverted nature to take action.

“Growing up in northeast Indiana, and as an International Baccalaureate student, I was the only person of color in most of my classes,” she said. “I started college in the pre-pharmacy program at Purdue University. Out of a class of 300, there may have been 10-12 Black students. We tried to get to know, and lean on, each other.”

In 2007, she became a district executive for the Boy Scouts of America in Fort Wayne, Indiana.

“When I started, I was the only person of color working in our office,” she said. “And I was one of two women who were district level executives – all of the other women were administrative assistants.”

“I tried to impress on management the importance of having more diverse representation on our committees and executive board,” she said. “I recruited some of the influencers in the Hispanic and Black community, and they joined the board of the Boy Scouts. I also was able to hire some Hispanics and Blacks to assist us with new membership recruiting and volunteerism. We were approaching some groups that typically were never given the opportunity to even join.

“What happened was our membership almost tripled, just because we had representation. It made a huge difference.”

Farmer hopes to have a similar impact at Viasat by helping increase diversity, particularly among Duluth management. The BPA is working with the Duluth People & Culture department on ways to increase the amount of Black talent in the Viasat’s Georgia office.

So far, the support for those efforts has been broad, coming from coworkers across multiple campuses, and several company executives.

“I’ve been amazed by the acknowledgement and the desire of people to get involved and to help,” she said.

“It allowed for a safe space to discuss our reactions to the social climate,” Farmer said. “It included a live panel discussion, and a coordinated ideation session in which initiatives and a call-to-action tone resonated.”

BPA chapters in Carlsbad and Denver have existed for several years.

“The support on all levels to the formation and development of the Black Professional Alliance at Viasat Duluth was incredible,” Farmer said. “The Diversity and Inclusion leadership at Viasat has been extremely involved in the promotion of equity and awareness.  They have become a critical and extremely vital resource to the group.”

As part of Black History Month, the Duluth BPA plans a career development series that will emphasize the importance of Viasat’s mentorship program. “Mentors are so valuable to newer talent, and the mentorship program here is really fantastic,” she said. “But a lot of times, I think what we are finding is that connecting mentees with mentors has been a struggle.”

Duluth’s Black History Month celebration will include a Black history trivia night, Slack posts on influential Black professionals in tech and science, a BPA-sponsored career development event, a sock drive to benefit the homeless, as well as a session called “Coffee and Careers” where Black employees will discuss their career growth and experiences.

Farmer sees Black History Month as a way to not only acknowledge the contributions of Black people, but to raise awareness of the barriers to inclusion Black people often face.

“I wouldn’t say that Black History Month is more important this year than previously, but I will say the events of Black Lives Matter have been an awakening for many  people – and a catalyst to get involved,” she said. “I felt that the Black Lives Matter movement caught the attention of people and it forced them to really try to understand the everyday challenges diverse populations face for no reason but the color of their skin.”