Instead of a big holiday party this year, Viasat's Denver group did a smaller gathering and donated $10,000 to Adopt Colorado Kids. 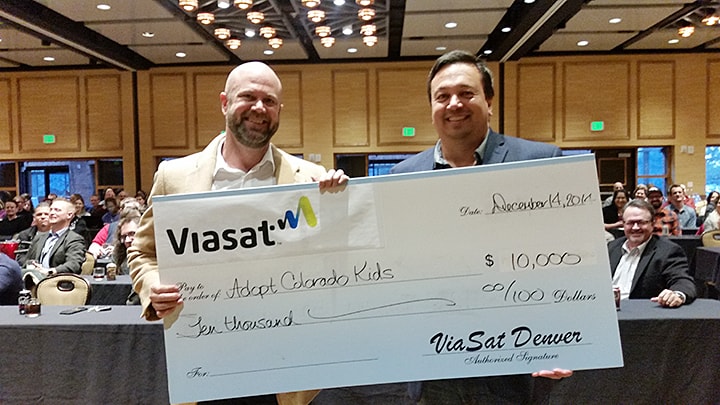 Children who leave the foster care system without finding a home are at far greater risk for social problems than the general population. Less than half graduate high school, and nearly half are homeless within a year of leaving the system; females are three times more likely to get pregnant than those who weren’t foster children, and both genders suffer post-traumatic stress disorder at twice the rate of U.S. veterans.

“The one thing that changes all those outcomes is a family,” Adopt Colorado Kids President Brian Mavis said during Viasat Denver’s Dec. 14 holiday gathering.

For the second time, Viasat Denver employees voted to donate $10,000 to the organization. They also did so in 2015.

Viasat forgos a large holiday party every other year, instead donating money that would have been spent on a big event to a Denver-area nonprofit.

Mavis said his wife received the phone call about the 2017 donation.

“She told me, ‘They voted for the kids again’,” Mavis said. “That’s a great way to put it; it’s not about us. It’s about the kids. You’re changing the lives of kids.

“I’m grateful for a company that cares about their community, and one that has another bottom line beyond profits.”

The money will be used to help recruit new foster and adopted families, and create videos of eligible children that potential adopters can view on the Adopt Colorado Kids website.

“A foster child’s biggest fear is that they are not lovable,” Mavis said. “This donation could help a couple dozen of those kids change their lives forever, to let them know they’re not alone, that they’re loved and belong to a family and have a hopeful future.”

While many children still need forever homes, Adopt Colorado Kids is bringing those numbers down. In 2010, there were 612 Colorado children seeking adoption; today there are 303.