The Denver campus marked June 20 as the day commemorating the end of slavery. The day, which blends the words June and nineteenth, is officially celebrated on June 19. On that day in 1865, Union Maj. Gen. Gordon Granger went to Galveston, Texas to tell enslaved people that slavery had been abolished.

Also called Emancipation Day, Juneteenth is today marked much like the Fourth of July.

“This day is about having fun,” said Viasat Denver’s Gerald Brewer, who DJ’d for the event. “It’s definitely a good idea to celebrate freedom. As Americans, we celebrate freedom on the Fourth of July. And that’s what Juneteenth means to African Americans. It’s a tradition that’s important to keep.”

In addition to having fun, Pherin Bailey hopes people are reminded of the historical significance attached to Juneteenth. 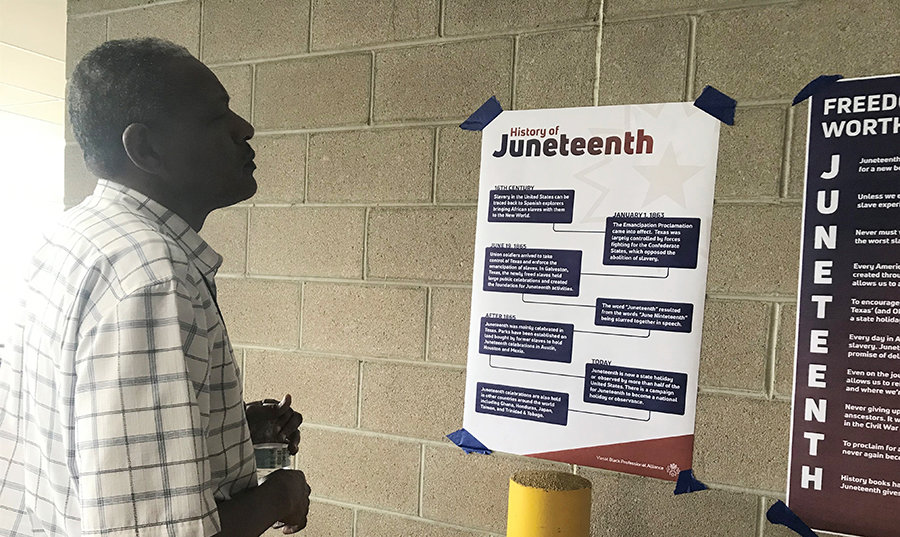 Viasat employee Hussein Ali learns a little about the history of Juneteenth during an event in Denver.

“This isn’t something you get taught in school, so it’s good to educate people on this part of our history,” said Bailey, a Viasat Denver employee and BPA member. “Most people think President Lincoln signed the Emancipation Proclamation and all the slaves were freed. But that’s not actually the case. There’s more to the story.”

In fact, Lincoln signed the famous document on Sept. 22, 1862 – almost three years before Gordon made his announcement in Galveston. The Emancipation Proclamation declared freedom for Confederate slaves on Jan. 1, 1863, but that edict wasn’t bound in concrete and many slave owners did not recognize it. In areas isolated from Union troops – including Texas – slavery continued, and even grew. Gordon’s June 19, 1865 proclamation, issued with 2,000 Army soldiers at his side, was for many the start of freedom.

“In this country, slavery doesn’t exist in that form anymore, so we’re far removed from the idea of it,” she said. “But in actuality, slavery was six generations back – and that’s not far.”

“I want to celebrate it because it’s part of my heritage,” she said. “But we all live in this country; it’s good for all of us to be educated on diversity and different cultures.”

The day is growing in popularity. Pennsylvania just became the 46th state to recognize it, leaving four states – Hawaii, North Dakota, South Dakota and Montana – as the only ones that don’t yet do so.

The U.S. Senate passed a resolution last year recognizing Juneteenth Independence Day as a national holiday, but it has not yet been approved in the House.