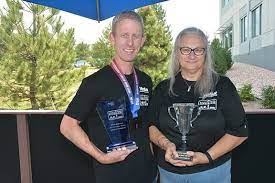 Eight Viasat employees currently rank among the top endurance athletes in the world. The group, including Denver software developer Erik Clark, won the 2017 Race Across America (RAAM) on June 23. They finished the nonstop, 3,070-mile biking event in five days, 17 hours and 22 minutes, riding at an average speed of 22.3 mph.

Denver Training and Development Specialist Karen Mallette traveled with the team as part of the support crew.

Known as the world’s toughest bicycle race, the course took the team over three mountain ranges, two deserts and 12 states, with climbs that added up to more than 170,000 feet. The event includes 8-, 4- and 2-person teams and solo riders.

A Viasat team has participated in the event since 2006, and usually makes a good showing. In 2016, it took fourth place. For this year, they set a new goal: to win.

Clark, 45, and traditionally a mountain biker, was recruited to the team by Carlsbad cyclists in 2016. He qualified during a tryout in California.

“I enjoy a good challenge and love cycling,” he said. “Throw in getting to see the United States like I’ve never seen, team building, making new friends, and getting into good shape and I was sold.”

Mallette first heard about the race in 2007 while working for WildBlue (before it was purchased by Viasat). A cyclist as well, she was intrigued by working as part of the support crew.

“I put it on my bucket list,” she said. “Two years ago, I made the decision to do it. I love cycling and the aspect of seeing the country from sea to shining sea was a big draw.”

Five of Team Viasat’s 2017 riders work in Viasat's Carlsbad office. Clark, and two cyclists from the Georgia and Switzerland offices, rounded out the team.

Clark started his 2017 training in January, first riding inside on a stationary bike, moving outdoors as weather improved. At the peak of training, he rode 250 miles a week. Those 12-14 hours of weekly cycling required support from his wife and children.

Additionally, riders are not paid but use vacation time for the event, using their own bikes and equipment.

The team's strategy to win included riding two bikes instead of just one; a road bike for climbing and a more aerodynamic time-trial bike for speed.

“The smallest increments across 3,000 miles add up,” Clark said.

Mallette said the tension during the RAAM was nonstop.

“It was a race, with all the things that word entails – the competition, the drama,” she said. It was times five, every day, all day long.”

Riders and crew sleep very little during the RAAM. Clark said he caught 3-4 hours of sleep each day. The worst part of the ride came early, while riding near Borrego Springs, California in 114-degree heat.

“The winds were blowing in circles so it was like a tornado of heat,” Clark said. “It’s unbelievable how hot it was. “

The best? Hearing messages of support from across the country and the fierce but respectful rivalry with the second-place Canadian team.

“It was a total chess game,” Clark said. “It kept our teams driven throughout the week, and made it so challenging and exciting. We didn’t know we were going to win until the last two hours of the race; it went all the way down to a 9-minute lead.

“But we had this camaraderie with them. We had a beer with them after the race, and it was just a great display of sportsmanship and respect.”

Mallette, who said the RAAM is “in her blood,” plans to do at least another year as a support crew member. Clark hasn’t ruled it out, but said he needs at least a year off to take a summer vacation with his family. Meanwhile, he’s still winding down from months of training and competition.

“I feel a little confused on what I should be doing now,” he said. “After you’ve ridden so much and don’t have a next event to do, do you keep riding? Start hanging out on the couch? I’ve still been riding like I was preparing for the race because I haven’t figured out how to stop.”