A Viasat Cleveland designer works to give area school kids the same motivation for their future that his father inspired in him. 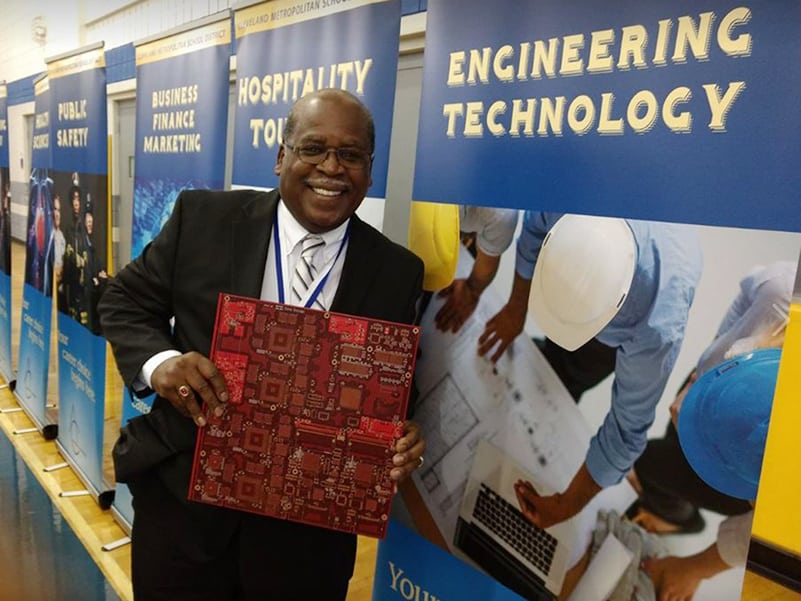 When Michael Hawkins was a boy, his father fanned the flames of his passion for science.

“He used to call me his little scientist,” said Hawkins, a senior printer circuit board designer in Viasat’s Cleveland office. “He had a lot to do with the path I chose in science and technology.”

Hawkins’ father didn’t just encourage his son; he also walked the talk – working in the aerospace industry as a machinist.

Hawkins knows not every child has such a role model. And as an African American, he’s particularly aware of the challenges young African Americans face in finding careers in the tech industry.

“Most of the places I’ve ever worked I was either the only black male or the first black male,” he said. “With that comes a unique set of challenges. I faced so many things that could have deterred me.”

The greatest obstacle for many African Americans is simply not knowing about the career opportunities available. In 2004, Hawkins set out to create such awareness, visiting schools to show students the possibilities that exist in the fields of science, technology, engineering and math (STEM).

With Hawkins in the lead, the partnership between the company and the school has steadily evolved. The company donated a 3D printer to the school, and Viasat and Garrett Morgan leaders are now discussing launching a robotics program at the high school.

Current juniors enrolled at Garrett Morgan have visited Viasat's Cleveland facility twice, and their teacher sees the positive impact it’s had on them.

“These kids deserve that kind of motivation. They haven’t been exposed to many companies, and seeing a place like Viasat helps them imagine what their future might look like.”

Her students’ words back up Kothareddy’s observations.

“Our trip to Viasat meant a lot to me because I’ve wanted to be an engineer since I was small,” said Abdallah Saoud. “It’s pretty cool that you guys deal with satellites in outer space and better internet connections around the world.”

Brentasia Wagner was impressed by “how something so little could make such a big difference,” recalling the physical size of the computer chips, integrated circuits, and other products developed at the Cleveland site.

Darion Robinson, who aims to become a civil engineer, said, “I really liked the work environment at Viasat and that it wasn’t just one specific gender or race. I liked hearing everyone’s story of how they got where they are, the ups and downs they went through.”

Hawkins hopes these students will follow in the footsteps of several that he’s mentored since 2004. Many of them now have careers in the tech industry.

“If we can continue to do that, it makes me think we’ll begin to see a variety of different perspectives and innovative ideas coming from a more diverse and blended workforce here in America,” he said. “That makes me feel hopeful.”