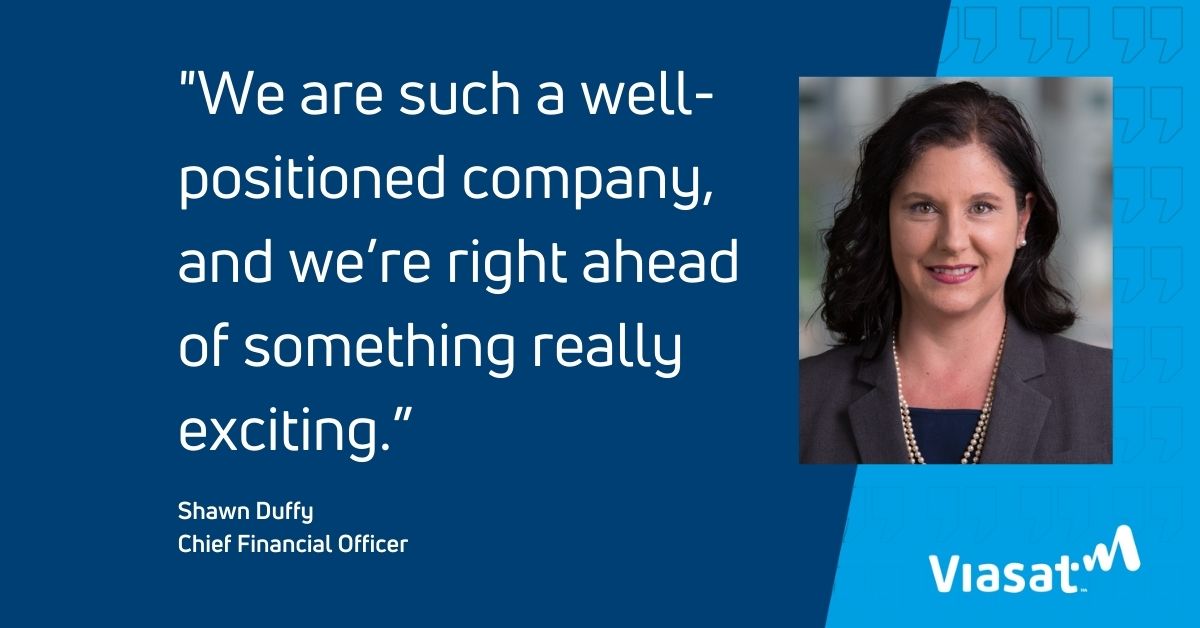 Viasat Chief Financial Officer Shawn Duffy’s father instilled in her the belief that anything is possible, but to always beware of potential downsides. Those teachings continue to influence both her career and professional life.

She’s following them now as the company prepares for the launch of its first ViaSat-3 satellite. Even as Duffy anticipates the positive changes Viasat’s global satellite constellation will bring, she’s prepared backup plans.

“We are just right before an absolutely incredible time for the company,” Duffy said during a March 3 talk with employees. “Every time we bring capacity into our portfolio, we monetize it and our company grows. So when you look to what’s coming with the ViaSat-3 constellations right around the corner, the growth and opportunity we have is just really exciting.”

Working in the space industry comes with high risk, and thinking through all possibilities.

“Things happen that you don’t expect, that are out of your control,” she said. “An important part of my work with the leadership team is making sure our business can withstand mishaps, that we have the things we need collectively to weather the storm. I think about the levers – if this happens, what would we do. And I try to have a suite of options.”

Duffy attributes her combination of optimism and realism to her early mentors.

“It started with my father who at a really young age asked me, ‘What do you want to do?’” she said. “Never once did he say you probably shouldn’t do that. He always came in with pros and cons about what one path would be vs. another. And at the end of it, he always said, ‘You can do it.’ It just set a mentality that any path, regardless of what it was, was doable.”

A California native, Duffy earned a bachelor of science degree in business at San Diego State University. She worked in finance for a variety of companies, including Ernst & Young, and retailers Charlotte Russe and Sweet Factory. She joined Viasat in 2005 after a recruiter contacted her.

“I didn’t really know that much about Viasat, but the more I got to know the company, who their leaders were and what reputation they had, I understood this was a place I wanted to be,” she said.

Duffy held several senior financial positions at the company before becoming CFO in 2014. Her current role includes not only financial planning and tracking cash flow, but continually analyzing the company's financial strengths and weaknesses. It’s a huge undertaking for a growing, multi-segmented company whose most recent quarterly revenue was $576 million.

In addition to her everyday responsibilities, Duffy breaks all those details down in quarterly reports and on earnings calls to Viasat’s investors.

“I’m not going to say it’s easy,” she said. “We’re a complex business. So part of it is walking them through where our revenues and growth is coming from — giving them the confidence that what we tell them is coming next is coming next because they can see that our diversity is what makes us strong and agile. It’s a really important part of our business strength.

“The other thing is pulling apart the performance. Right now we’re borrowing more debt to be able to fuel the additional capital we need for ViaSat-3. The money we’re generating now is off our prior investments — satellites and the networks we’ve built.”

Duffy is careful to point out to investors the return those investments are generating.

“You can think of our EBITDA (earnings before interest, taxes, depreciation, and amortization) performance as the money we are earning on our prior investments which are now deployed, i.e. our productive asset base,” she said. “Looking through that lens, our EBITDA returns on those investments has been about 20% on average the last few years.”

While ViaSat-3 has required a huge financial commitment, she says the payoff will be worthwhile.

“If you roll forward five years, we expect to double our revenues and be double the size,” Duffy said. “The Americas (the first ViaSat-3 satellite) will be up there, and starting to hit some sweet points on revenue generation. APAC (the third ViaSat-3 satellite) will just really be getting started. So there are still some pretty good growth drivers beyond that.

“It’s been an unusual year. We’ve had to make a lot of tweaks to stay the course. But we are such a well-positioned company, and we’re right ahead of something really exciting.”

For that, Duffy credits Viasat’s leadership.

“We have a truly good leadership team — people you’re glad you know on a personal and business level,” she said. “They’re wicked smart. They care about what we’re doing, how we’re getting there, and they care about the people.”

That’s also reflected in Viasat’s emphasis on work/life balance, which has allowed Duffy to successfully juggle a demanding career while raising two children.

“I love what I get to do, even with the challenge and the craziness,” she said. “Teenagers are crazy and work can be crazy. But I love all the parts of it. I’ve had to tweak a presentation at 3 a.m., and I’ve been up wrapping my kids’ birthdays presents at 3 a.m. I felt I didn’t want to lose out on any of it. It just took being creative and planning ahead.

“We’re really lucky at Viasat. People value their families, and I think that’s a cultural tone.”

In addition to her work at Viasat, Duffy has served on the Business School Advisory Board at California State University-San Marcos for more than five years, educating students on global economic growth principles.

She likes to ski, snowmobile, camp, fish, attend wine tastings and spend time with her family.