Viasat CEO Mark Dankberg said the company's integrated, high-capacity satellite network is ideally poised to provide connectivity around the world on a variety of applications. 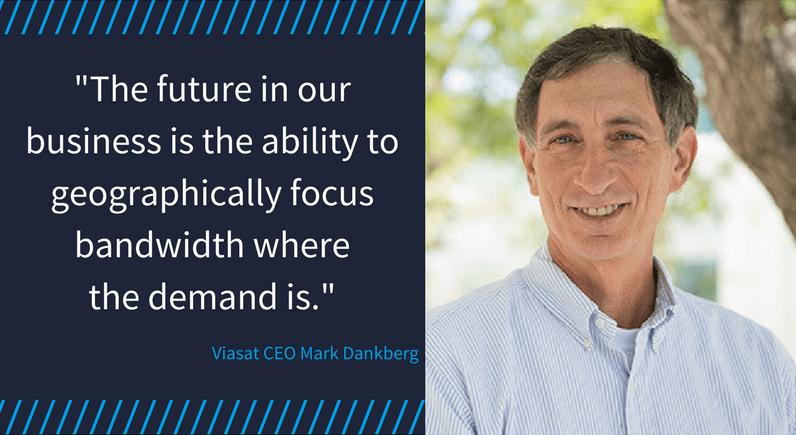 Asked about how he sees the satellite industry evolving into the 2020s, Viasat CEO Mark Dankberg offered a simple answer based on supply and demand.

“The future in our business is the ability to geographically focus bandwidth where the demand is,” Dankberg said, speaking during a panel discussion at the Satellite 2018 industry conference in Washington, D.C. March 14.

Dankberg noted that, while the need for more bandwidth from satellites was “totally obvious” to everyone quite some time ago, those inside the industry didn’t necessarily recognize it as readily. As streaming video came to dominate bandwidth needs in recent years, Viasat responded by building satellites not only larger, but more efficient.

“We make satellites that are modestly bigger but enormously more productive,” Dankberg said, alluding to the ViaSat-1 and ViaSat-2 satellites, launched in 2011 and 2017, respectively.

Each of these satellites represents enormous gains in capacity, and ViaSat-2, with its ability to shift capacity, exemplifies Dankberg’s comments about focusing bandwidth where it’s needed. While some satellite networks — particularly those in lower orbits — see their bandwidth inefficiently allocated over oceans and unpopulated areas, Viasat’s geostationary (GEO) satellites can focus beams on populated areas where the bandwidth can be monetized.

Dankberg suggested that, in the near future, bandwidth will be much more readily available—perhaps alluding to the next class of satellites, known as ViaSat-3, that the Company is building.

While capacity and the ability to shift the resource to meet demand are essential, Dankberg also discussed the need for security.

“People will take (bandwidth) for granted,” he said, adding that security will likely take its place as the primary connectivity concern.

“Cyber security is going to be really important, and will need to be built into the network,” he said.

As the panel turned to the Internet of Things (IoT), Dankberg said he thought too much attention has been paid to future 5G networks and not as much on satellite. But satellite, he said, will be a big player.

“The opportunities for satellite in IoT are great,” he said. “The wireless carriers cite some of our applications as the best examples of IoT, like monitoring jets in real time.”

IoT devices will require a great deal of data — the kind provided by Viasat’s high-capacity satellites.

“If we can handle streaming, real-time video on airplanes, that makes the problem of IoT data a lot less daunting,” Dankberg said. “It will be the same in connected cars.”

Also key to supporting IoT, he said, is the ability to make different kinds of antennas beyond the well-known reflector dish now common on homes and businesses.

“As IoT evolves, we’re focusing on the future need to develop really small antennas [that can transmit] large amounts of bandwidth that can connect things like motorcycles, cars, etc.”

Viasat’s facility in Switzerland is already working on one type of this smaller antenna — a flat panel design that can steer its beams electronically and offer excellent performance in a much smaller and lighter form factor.

Those smaller and more flexible antennas are key to satellite providers like Viasat finding success in the connected transportation realm. That’s because electronically steered antennas can track a satellite signal from a moving vehicle or other craft without having to move itself.

“Everyone expects to be connected wherever they go — whether on a plane or on a cruise ship,” Dankberg said. “We're looking at business models that provide an opportunity for sponsors to help airlines, cruise ships, etc. deliver connectivity to passengers in a way that is more profitable.”

He also noted that Viasat believes creating vertically integrated networks is the best way to get high bandwidth delivery. With Viasat building the satellites, the ground systems, the antennas, modems and other equipment, the Company’s ability to offer high-speed, reliable and secure connectivity is more assured.

Regardless of the application, Dankberg pointed to the need for ubiquitous connectivity as a driving force within the industry as it works to capture a larger piece of the data pie. Reaching all of those people and devices is the challenge for the industry, he said.

“Viasat is in the access business, not the infrastructure network business,” Dankberg said. “It’s important to get as close to the customer as possible.”

Viasat CEO Mark Dankberg, third from right, joined an industry panel at the Satellite 2018 event to discuss the future of satellite communications.