In 1986, public internet was still years away when three young engineers launched the company in a spare bedroom 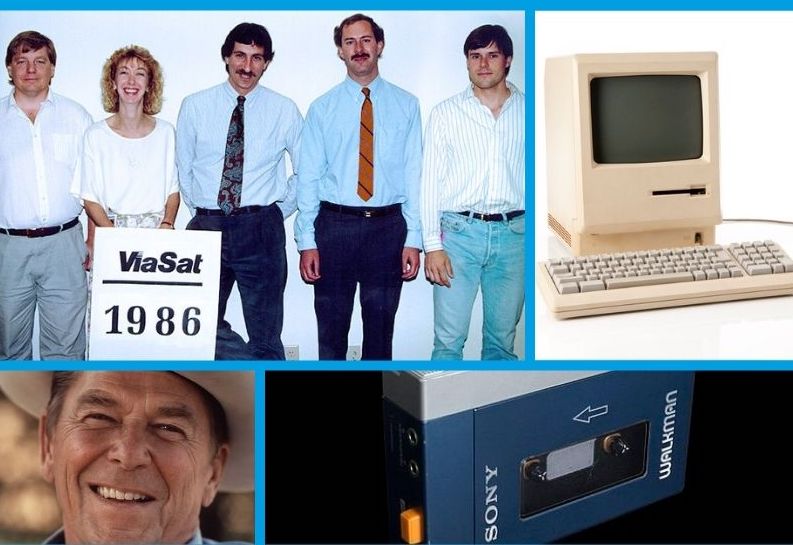 In May 1986, Robert Palmer’s “Addicted to Love” was a No. 1 hit, Ronald Reagan was president, and the Walkman was changing the way the world listened to music. Early cellphones – far from mainstream – weighed about 2 pounds and sold for around $3,300. And personal computers, while becoming common, were used mainly for video gaming, word processing and homework; they wouldn’t start getting connected to the internet for seven more years.

The spring of ’86 was also when three young California tech employees left the security of jobs with a San Diego satellite telecommunications manufacturer to found Viasat. Mark Dankberg, Steve Hart and Mark Miller were compatible coworkers at Linkabit, and launched Viasat on the strength of their reputation and contacts in the defense sector.

Armed with three Macintosh computers and little else, the men worked in a spare room at Dankberg’s house, giving companies the engineering and support needed to win satellite-based defense contracts. After securing two of those contracts in Viasat’s first year, the company was awarded $300,000 in venture capital. They quickly began developing products – the first a signal-to-noise ratio device for the U.S. Army that also served to establish Viasat’s reputation.

From there it grew to what it is today: An international, multi-segmented communications company of about 5,600 employees, whose FY2020 revenue was $2.3 billion. It’s a company that links soldiers on the ground with command centers thousands of miles away; provides critical communications to senior government leaders in the air; streams in-flight entertainment to airline passengers around the globe; enables employees and students in the remotest of places and in multiple countries to work and study from home; and brings the online world — often for the first time — to previously unconnected communities throughout Latin America and to several other countries.

Here are highlights from the long list of accomplishments they set in motion 35 years ago:

1996 – Viasat’s Initial Public Offering closes in December, and the company begins trading on the NASDAQ as VSAT

2011 - ViaSat-1, the highest capacity satellite in the world at the time with 140 Gbps capacity, launches in October.

2012 - Viasat rolls out Exede by Viasat, a nationwide service offering the fastest consumer satellite broadband at the time.

2019 - Viasat signs contracts for the launch of three ViaSat-3 satellites. Viasat contracts to deliver and test the first Link 16-capable LEO spacecraft, designed to enhance communications for U.S. and allied military forces across the global battlespace.

2021 - Viasat acquires RigNet, Inc, a leading provider of networking solutions and specialized applications. The company also closed on the purchase of the remaining 51% of the European Broadband Infrastructure — including the KA-SAT satellite.