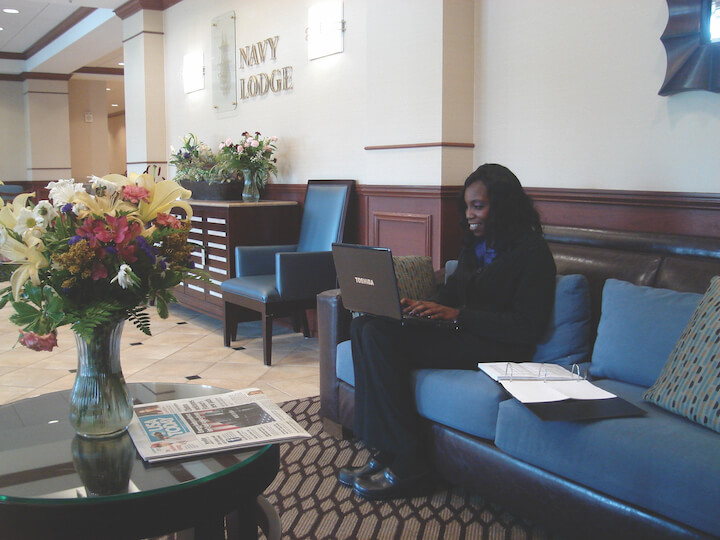 For bases in the continental U.S., providing sufficient quality-of-life connectivity to barracks and other facilities is straightforward. However, having that same level of service at overseas naval bases can be a challenge.

For U.S. Navy sailors stationed overseas, nothing boosts morale more than an opportunity to connect with friends and family back home. In the past, connection may have come by way of a letter written or received in a distant port. But for today’s generation of sailors, that’s not enough.

What V-mail (Victory mail) was to the morale of sailors in World War II, email and online chatting are today. When living on military bases in the continental United States, service members are accustomed to fast, readily available internet.  After all, having video chats with friends and family, streaming entertainment, playing online video games, and shopping online are just a few of the things we’ve all come to expect we can do without hurdles.

“These are primarily 18- to 24-year-olds,” said Robert Brown, vice president for business development for the Trusted Connections team at Viasat. “They are very much an on-demand kind of audience when it comes to internet content and communications.”

For bases in the continental U.S., providing sufficient quality-of-life connectivity to barracks and other facilities is straightforward. However, having that same level of service at overseas naval bases can be a challenge.

“In many places where Viasat has been contracted to deploy its networks, the sailors previously had sub-par experiences with the internet, and this significantly affected their morale,” Brown said.

That’s why Viasat has been tasked by the Navy to upgrade connectivity at its installations around the world.  As part of its contract through the Telecom Program Office of the Navy Exchange Service Command (NEXCOM) — recently extended by the Navy for another five years — Viasat delivers managed internet, Wi-Fi, voice, TV, and other services for personal-use networks across Navy facilities at several locations around the globe. These include Unaccompanied Housing, Family Housing, Morale, Welfare and Recreation (MWR), and Navy lodging facilities.

Most recently, Viasat was tasked with providing connectivity to two installations on opposite sides of the world: Poland and Guam.

“We worked with the Navy during base construction in Poland to have a new Wi-Fi network installed with the same quality of service that Viasat has installed at over 100 other bases around the world,” Brown said.

One distinctive feature of Viasat’s goWiFi service is that sailors can bring their Wi-Fi accounts with them to any Navy location with a Wi-Fi network operated by Viasat. If they are a subscriber of our goWiFi service and get deployed elsewhere temporarily or permanently, the subscription travels with them.

A challenge in Guam

While the Redzikowo project has been completed, Viasat is just beginning work in Guam, which includes both Naval Base Guam and Anderson Air Force Base.

In comparison to the effort in Poland, the scope of work in Guam is quite extensive. Guam’s installations in general are larger and more spread-out, with an aging backbone network.

To address this challenge, Viasat and its local telecom partner, GTA Teleguam, are making a substantial investment to upgrade older copper-based networks with a new fiber backbone. This will allow for substantially faster internet, accessible Wi-Fi across the base, voice calling, and interactive TV services.

“The infrastructure on base is in need of some TLC,” said Brown. “We’re going to deploy a brand-new network, one that provides for greater capacity and resiliency through the use of fiber connecting all the buildings.”

Guam’s Unaccompanied Housing, MWR and lodging facilities will receive new equipment expected to substantially improve the speed and resiliency of internet, Wi-Fi, VoIP, and TV services. The system is designed to meet future growth in demand for internet services.

“Our aim is to build this network so it can meet tomorrow’s demands now,” Brown said. “Everything starts with a good design and quality infrastructure.”

Installing new fiber-optics is routine for Viasat. But Guam offers a somewhat unusual challenge: Japanese troops invaded Guam in December 1941, followed by a bloody U.S. amphibious assault in July 1944 that liberated the island. However, the island was left with thousands of unexploded bombs, shells, and mines.  Some 80 years after these battles, most of the munitions have been cleared, but caution will nonetheless be taken to ensure the fiber installation is safely completed.

“You have to go through a very arduous mine exploration exercise for every inch of the place where you plan to dig,” Brown said.

Viasat’s work in the region aligns with recent Pentagon announcements identifying Guam as a strategic area for U.S. military base improvements.

In addition to Guam and Poland, Viasat plans to expand its deployment of TV services into CONUS Navy Gateway Inns and Suites facilities, similar to the TV services the company installed in Navy Lodge facilities earlier in 2021.

“We will dramatically improve the quality of the TV service at these facilities by upgrading them to HD channel line-ups, interactive menus, and streaming capabilities,” Brown said.

For these and some other Navy lodging facilities, Viasat currently provides managed Wi-Fi services and managed VoIP services to handle reservations and other customer service functions.

To Brown, offering sailors at overseas bases better amenities than the traditional handful of old DVD movies is more than a business arrangement for Viasat — it’s simply the right thing do to.

“These are men and women fighting for our freedom,” he said. “At the very least, we should strive to ensure they have the same creature comforts that we take for granted at home.”