The big focus is preparing for ViaSat-3 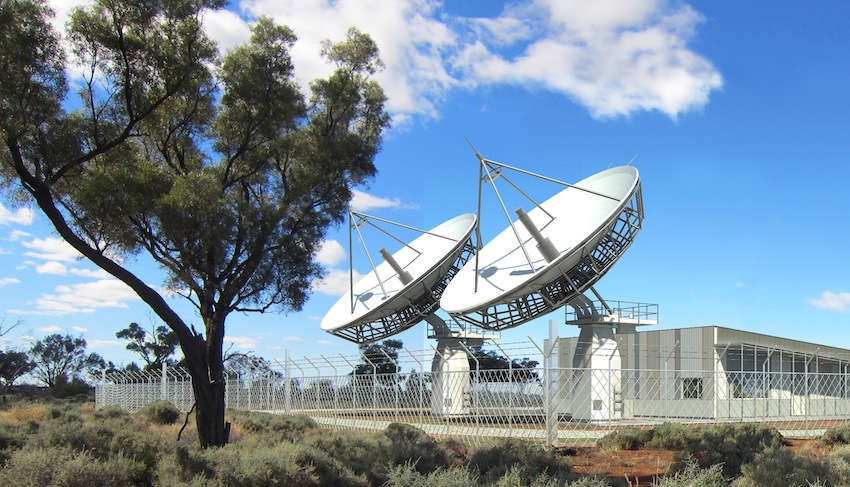 In the Australian outback town of Bourke, satellite antennas built by Viasat provide part of the ground connection for the nbn network. Photo/nbn

For the past several years, Viasat’s Australia team has built up a thriving high-tech communications business without direct access to its most critical element. With the launch of the third ViaSat-3 spacecraft, that will change, opening the door to a wave of new opportunities.

“Right now, we run a satellite busines down here without our own satellite,” said Viasat APAC Vice President Peter Girvan. “Soon we’ll be running it with a satellite.”

ViaSat-3 is a constellation of three satellites, with coverage that will overlap and encircle the globe. The first of the three, expected to launch in 2022, will cover the Americas, the second Europe and the third Asia Pacific – including Australia.

The Asia-Pacific – or APAC satellite – will cover the largest swath of both the world’s surface and population. More than half the global population – 4.1 billion people in 48 countries – is in Asia.

Viasat’s Asia-Pacific office is headquartered in Melbourne, and Girvan and his team are paving the way for its arrival.

“Everything we’ve been doing to date has been what we can do with the nbn satellites,” Girvan said. “It’ll be nice to have a bit more choice.”

The ADF now relies heavily on the U.S. Wideband Global Satcom (WGS) military satellite network for most of its defense communications. When ViaSat-3 APAC goes into service, the ADF will have an opportunity to use it for some of its communications.

Today, 48 employees are spread across Viasat’s four Australia offices (including one two-man ADF support facility), handling its existing residential, commercial aviation and defense business as well as preparing for ViaSat-3.

Many of the APAC countries already have government-owned or controlled satellites. Where coverage is allowed, Viasat is working to acquire landing rights – permission to operate the satellite – and establish ground infrastructure. To meet those demands, Viasat plans to add 30 employees to its non-government workforce in the next year, and another five in 2022.

Sydney-based finance manager Danielle Rowtliep said the Australian team is united in its enthusiasm about what promises to be a dramatically different future.

“To be a part of this, knowing you’re going to be part of history, makes this a very exciting time,” said Rowtliep, who’s been with Viasat for six years. “When I first started, we were all taking on other roles to make the business grow. Now, with ViaSat-3 coming, there’s never a dull moment. Everyone gets in and gets the job done; it’s something you want to do because you want to see the company succeed.

“It’s a good opportunity for the engineers here, and for the people of Australia.”

The goal of nbn is to bridge Australia’s digital divide by providing access to fast, broadband at affordable prices. Viasat supplies the equipment that nbn uses to provide that connectivity link to the approximately 400,000 rural homes that terrestrial providers can’t reach, via nbn’s two Sky Muster satellites.

To do so, it first constructed 10 gateways and two data processing centers, and supplied the antennas and modems needed for each household covered by the service.

To date, nbn has about 120,000 active subscribers on the network, and adds about 500 more each week.

And in mid-2020, Viasat opened its new Real-Time Earth (RTE) facility in Alice Springs, Australia. Viasat contracts with government as well as commercial customers who use the RTE system. The Australian site is a crucial southern hemisphere link in the growing Viasat RTE system, which includes existing facilities in the State of Georgia and the United Kingdom and is expected to eventually include 8-10 similar facilities worldwide.

On top of all this, Viasat’s Australian Government Systems, headquartered in Canberra, provides a wide range of defense technology and connectivity technology to meet the ADF’s needs in air, on land and at sea.

“There’s a massive amount of work, and the opportunities are also massive,” said Colin Cooper, General Manager Government and Defence at Viasat Australia.

Viasat is working with the ADF to replace, modernize and upgrade its communications systems to meet its future needs. Plans for the ADF SATCOM System call for spending billions in the next decade to accomplish those goals – enhancing and maintaining cutting-edge SATCOM while guarding against the ever-growing threat of cyberattacks.

ViaSat-3’s technology dovetails with the ADF’s plans. Its beam architecture will provide high bandwidth that’s resistant to jamming, and the constellation’s global coverage will allow the ADF to expand its missions overseas.

To meet the rising volume of defense needs, Cooper said the team almost certainly will grow.

As a former, 26-year member of the Royal Australian Navy, Cooper said it’s also satisfying to give back to the ADF and his country.

“I think it’s fantastic to be representing a company with such brilliant technology and smart people enthusiastic about what we do,” he said. “For me personally, the opportunity to grow a vibrant and local Australian business on the back of that is really what excites me about coming to work every day.”

Excitement is a common theme among the Australia team. While ViaSat-3 APAC will be the last of the three-part ViaSat-3 constellation to launch, there is no time to spare in preparing for it.

“We’re the last in the queue but it’s becoming quite real for us,” Girvan said. “We’re in the design process for the SANs (satellite access nodes, or ground stations). We’ll soon move to formal acquisition of the sites. We’re going through the marketplace with all the fiber providers, contracting suppliers and hiring people. We’re deep into the program now.”

That also includes syncing systems within Viasat so all the company’s offices are aligned on a global scale.

It all adds up to work that is demanding, complicated and time intensive. But, Girvan said, it’s also highly satisfying.

“Getting on board through this growth cycle is really what attracted me here; I saw that opportunity with Viasat four years ago,” he said. “I love having this small-company feel, knowing you’ve got the big company backing.

“And we’re getting there. One inflection point now is the growth of the company as we deploy the ground infrastructure. This one will be dwarfed by the next one, when we start selling services across Asia. We’ll not just be selling but involved in supporting, billing and managing all the required partnerships you need to sell a terabit of capacity across the whole of Asia. I couldn’t think of anything better than being onboard during a phase like that.”

- The team: About 50 employees, with plans to grow

- The campuses: Offices in Melbourne, Sydney and Canberra, and an ADF support facility in New Castle