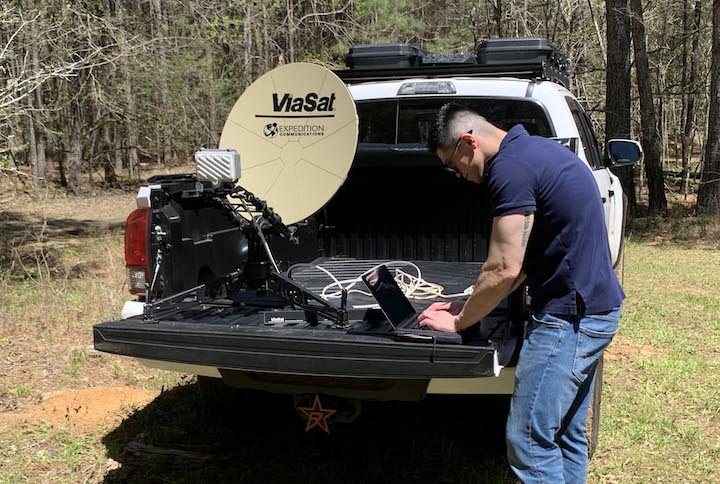 With Viasat connectivity, Expedition Communications' Rapid Deployable Satellite terminals can be set up just about anywhere.

In 2020 – a year marked by the pandemic and record-setting fire and hurricane seasons – it was among many critical instances where first responders relied on satellite connectivity.

“We’ve been in the first-responder industry for a while, and were prepping in 2019 to expand it,” said Expedition’s Chief Technology Officer Jerry Creekbaum. “With the pandemic, a portion of our standard fixed enterprise communications customer base slowed down as clients closed offices. But for first responders, wildfires, hurricanes and the setup of COVID-19 test centers made it a crazy year. We saw the need for better, more efficient services for the first-responder community.”

Jerry Goodwin, Viasat’s Vice President of Global Mobility Services, praised Expedition Communications for helping bring the plans to those who need it most.

“They’ve done an excellent job promoting our first-responder plans out in the marketplace,” he said. “There is a growing need for these plans in many areas. The fire season, for example, seems to get longer each year. These fire crews require communications for voice, upgrading topographical maps, status reports – all things that need real-time communication and require predictable availability. That’s why firefighters and first responders use our satellite connectivity. They know when they need it, it will be there.”

Adapting for the unique needs of first responders

“In responding to some of the issues emergency response agencies had during the pandemic, we saw a need for low-cost terminal configurations in communities that wanted some non-typical first-responder type services,” Creekbaum said. “We augmented the capabilities of our existing products to lower the cost of entry through our hardware configurations.

“This way those needing a terminal don’t need to spend large budgets on systems that could sit unused for months on end. They now have more options – from terminals that cost a few thousand dollars to the more expensive units with all the features and services.”

Creekbaum also scaled down its fly-away systems, making it easier for agencies to respond to remote emergency sites.

“We’ve researched and worked with manufacturers to get additional options, including systems that are packable,” he said. “If you’ve got an impassable road, or a need to get to a hilltop somewhere, you can put on a 38-pound backpack that’s got the complete communications terminal within it. Yet you’d have the same data rates as someone in a million-dollar command vehicle.”

“That way, they don’t need to worry about whether their plan has enough data,” said Liz Ingle, Expedition Communications’ vice president of sales and marketing. “There is a guaranteed safety net for them with these plans. Their plan isn’t going to be deactivated in the middle of the emergency just because they’re out of data.”

The plans are designed to work with the annual budgets common to most emergency agencies. Rather than worrying about monthly bills that may fluctuate in higher usage months, agencies pay one annual bill and have the flexibility to use the bandwidth on-demand throughout the year.

Agencies can also use more than their allotted annual data plan in an emergency with no immediate penalty or disconnection. If the emergency is declared a natural disaster, those agencies typically qualify for federal funds, which they can later use to pay their service bills.

“This way, even a small agency with a small budget can handle that big event and still be able to recover financially,” Creekbaum said. “It gives these smaller agencies or municipalities the ability to have the same tools a major metropolitan department would have.”

Larger agencies also have unique needs that Expedition and Viasat meet through a pool plan.

“If you have a statewide agency, a pooled plan allows them to draw from it as a unit and makes it extremely cost effective,” Creekbaum said. “That savings allows them to buy more terminals to spread across the state so the smaller counties are serviced the same as the bigger counties.”

For Creekbaum, providing such services is gratifying both professionally and personally.

“I’ve been in the satellite industry 38 years, so this work is based on all the lessons learned over the years responding to events large and small, natural and man-made,” he said. “Having a military background, service is important to me. And the first responders out there on the fire line, police and EMTs, they’re doing the same thing – serving the community. This is just a way to solve a challenge and give back to the first-responder community to make communications one less thing they have to worry about, it’s something I’m pretty passionate about having been there myself.”

Expedition Communications and Viasat have partnered for several years to support disaster relief efforts. In 2017, they worked together to bring relief to Puerto Ricans after Hurricane Maria.

“Meeting the complex needs of the first-responder community can be very challenging,” Goodwin said. “Expedition Communications brings years of experience and a proven track record of innovating to make their job easier. We are looking forward to working with Expedition to connect first responders in more territories as we grow our global footprint with the upcoming ViaSat-3 high-capacity satellite constellation.”

For more information on the company’s services and products, visit Expedition Communications.