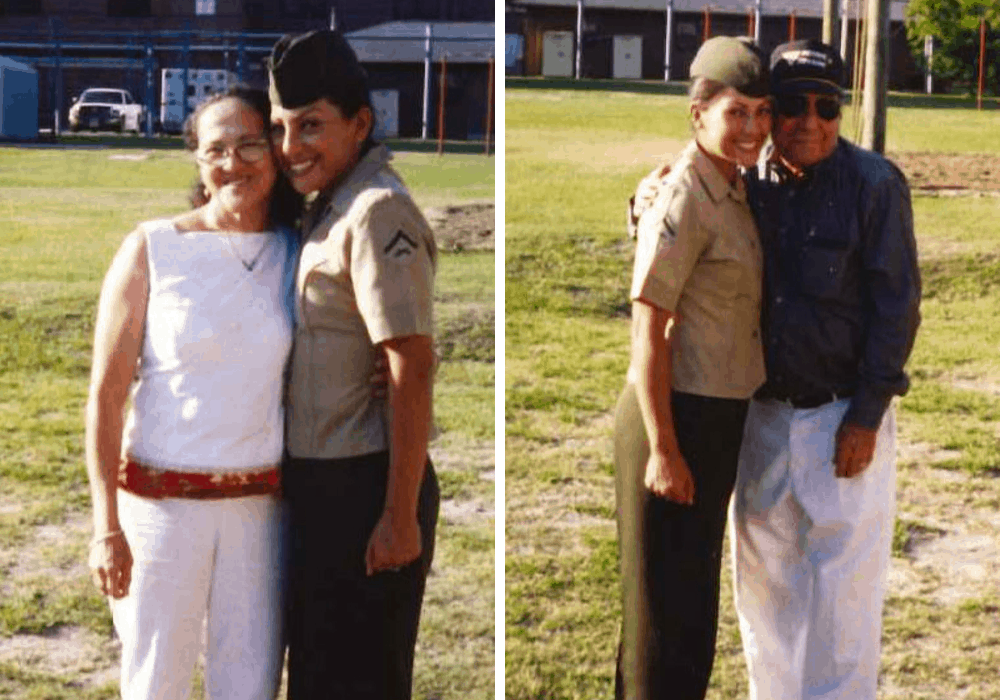 On Sept. 15, the nation began its tribute to the Hispanic and Latino Americans who have “positively influenced and enriched our nation and society.” This year,

Viasat’s employee resource group, the Hispanic/Latino Leadership Alliance (HOLA), is one way the company champions its own Hispanic employees. HOLA invests in Hispanic and Latino career advancement, and it recognizes the contributions that Viasat’s Hispanic and Latino employees make — to Viasat and to the nation.

Along with HOLA, Viasat also supports a community of veterans, many of them with varying backgrounds. Currently, veterans make up about 11% of all Viasat employees. As Hispanic Heritage month unfolds, Viasat salutes its Hispanic veterans — and acknowledges the importance of their stories. In this series, some of our Hispanic veterans reflect on their experiences and identities.

Marcela Torres was one of four girls, and as a girl she enjoyed field hockey and softball.

“I was the rugged one,” Torres said.

And it was this trailblazer-like disposition that predisposed Torres to her future as a Marine, she said. She also grew up near the Marine Corps Air Station in El Toro, Calif.

After one semester of college, she decided to go to boot camp.

Some family members were surprised at her announcement. But her father was supportive of her decision, and encouraged her to pursue her dream.

“Moving to the East Coast and going to boot camp for three months was a transition for me,” Torres said. “But I definitely think going through that transformation of becoming a Marine – it helped make me who I am today.”

During the rigorous 13 weeks of boot camp, instructors transform the recruits' identities into those of Marines, teaching them Marine Corps culture, heritage and traditions and how to follow orders, dress, speak and act like Marines.

Completing the training also made for one proud father.

“When I graduated from Marine boot camp, my dad was beaming and saying, ‘That’s my daughter out there,’” Torres said.

Torres served in the Marines 15 years. But when she started a family, she decided it was time for a change.

While it’s been difficult to move away from life in the Marines, Torres said she’s thankful for Viasat’s help in the transition to civilian life. Currently, she works as a People & Culture representative for the Government Systems division. Government Systems provides secure communications to the military and senior government aircraft.

“My transition was pretty seamless because I first came in supporting the government division in talent acquisition; I had a lot of veterans around me,” said Torres.

She’s also a member of Viasat’s Veterans Alliance, a group dedicated to supporting members of the military who work at Viasat and their families.

“After being in the military that long, I still wanted to be able to support our men and women in uniform. And working here at Viasat, I feel I’m still part of that because of the amazing technology we offer our service people through our Government Systems. I really feel like I’m still doing my part.”

For Torres, they’re another point of pride among many she’s found in her civilian job.

“I think Viasat’s amazing, and our veterans’ transition workshops – us helping them bridge that gap – are so important,” she said.

No matter where she is, the Marine Corps values of honor, courage and commitment will always remain at the forefront of Torres’ identity.

“I think the Marine Corps helps me be a better employee all the way around,” Torres said. “I know I’m going to be held accountable and need to be sure I do the best job possible. At the end of the day, it’s the same in that we have a job to do and deadlines to meet.”

For her, the chance to serve was not only an opportunity to build character. Torres also became a Marine to demonstrate her appreciation for her parents, who emigrated from South America.

“I think that was my main motivation to serve my country. I was like, hey, I didn’t take the traditional route, but I can still honor my parents and everything they did for me,” she said.

Torres emphasized that Hispanic Heritage Month highlights how many Hispanics have always been willing to dedicate themselves to America. And their children are even more willing to bridge their past with their future — and call themselves American.

“We’re just as proud to serve the country as the next person,” Torres said.