Almost every day, Viasat engineer Gloria Chauskey takes a work break to run along Ladybird Lake in downtown Austin, on the trail that passes her office window. For her, the company’s new Austin, Texas site is a dream site for a dream job.

“The location is amazing, probably the most convenient we could have chosen,” said Chauskey, who joined Viasat Austin in June 2017. “It’s one of the central activity places in Austin. Not only that, we have two supermarkets nearby and tons of restaurants. It’s walking distance from everything downtown.”

The office is on the ground floor of a high-rise apartment complex in the Seaholm EcoDistrict. This former power plant site was recently redeveloped into a 22 city-block neighborhood of offices, apartments, shops, restaurants and community gathering places. The district is also an example of smart city tech, equipped with solar power, reclaimed irrigation water, electric charging stations and other innovations.

It’s the kind of place where a fast-growing tech company like Viasat fits right in. 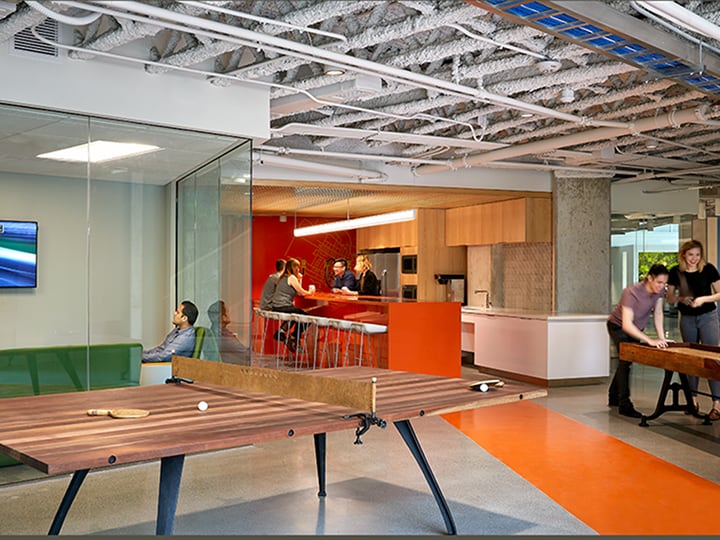 To complement its hip location, Viasat hired an architectural firm to put the finishing touches on the Austin space. The work was so impressive that Viasat Austin won a Design Excellence award from the American Society of Interior Designers.

The office is accented by a wall of air moss — a plant that grows without soil — and murals drawn by a local street artist. Co-lab working spaces and transparent walls and doors encourage collaboration and foster a sense of community.

Even in the midst of such open and eye-catching design, Chauskey isn’t distracted from her job. Perhaps because she enjoys the work so much.

“What I really like about working for Viasat is that we have lots of freedom about how to approach a certain problem,” Chauskey said. “That’s different from other companies I saw or worked for. Before, I needed to go through a very long chain of managers and approvals; that just wastes time.

“Here, if I believe there is a very good solution, something I strongly believe in, I don’t need to wait for someone else’s permission,” she continued. “I have the ability to start working on it. Whether it’s people who are as new as me or very senior, both are going to listen to me and take me seriously.”

A hub for DevOps

The Austin office is planned as a hub for the company’s growing DevOps teams. It will support the satellite services, cloud, infrastructure and security engineering teams as well as Viasat’s expanding data science group.

Though Chauskey was among the first, Viasat plans to add more software engineering positions across multiple technical disciplines there.

A native of Israel, Chauskey never imagined making the Lone Star State her home. Viasat has convinced her otherwise.

“I never thought of moving to Texas,” she said. “I thought either San Francisco or New York because I just love the city. Then HP accepted me immediately.”

Austin is one of the fastest-growing tech centers in the country. And Chauskey was surprised to quickly find a circle of like-minded friends.

Then she discovered Viasat, and moved downtown to an apartment she shares with her boyfriend. It’s an 8-minute walk from there to the office — one she makes every day.

“You get to know people and to like the place,” she said. “It’s been a great life-quality change for me.”

Chauskey also enjoys the intimacy of working for a new and (so far) small office. About 15 people work at the Austin site, and they share an easy familiarity.

“Most of us here are engineers, some are data scientists,” she said. “We’ve gotten to know one another. We go to lunch. We have a good base of knowledge about each other. So it feels very pleasant to come to work; I think that’s very important.”

The current Viasat Austin office is expected to grow to a staff of 50 by mid-2019. When it does, Viasat will open an identical office just across the street. 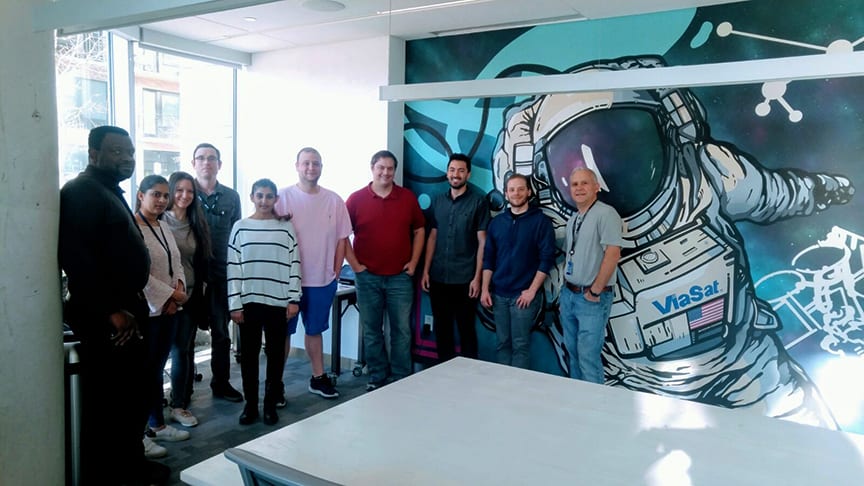 Gloria Chauske, third from left, joins other Viasat Austin employees in front of some of the street art that adorns the interior of the new office.